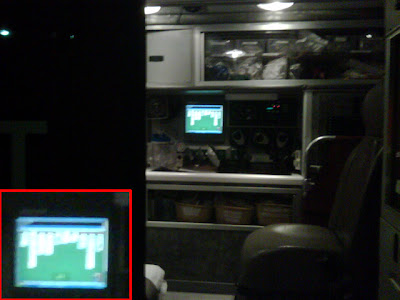 On Thursday night the Militant was hanging out in an unspecified location in Silver Lake with Militant Operative Blackbird when the two of them happened upon a a Los Angeles Fire Department paramedic ambulance nearby, lights flashing. The operative glanced through the side window and commented, "Is that Solitaire?" The Militant decide to take a closer look, and saw a screen with a green background, and rows of computer-generated images of playing cards moving around. So he snapped a pic with his Militant Cam and confirmed it: The EMTs play Microsoft Windows Solitaire on the ambulance's computer! (Pictured above, with inset)

The Militant wonders what the appeal is. Really, it's like the most boring computer game evar. Look, if you're gonna play a computer game on the job, why not go all the way and play Final Fantasy or World of Warcraft or something? Or why not a PS3 for the LAFD? Come on! Los Angeles just hosted the E3 convention, after all! Oh well. It may or may not be better than being on Facebook all day (as the popular social networking site is seemingly not blocked by the City's internet servers, where sites like YouTube and MySpace are).

The Militant didn't check to see if there was a person on a stretcher inside, nor did he want to know.
Commandeered by Militant Angeleno @ 1:16 AM

Thanks for always keeping a watchful and caring eye on the men and women of the Los Angeles Fire Department.

The LAFD does indeed use state of the art computers in your ambulance fleet, including the Firefighter/Paramedic staffed units that are best described as providing 'Mobile Intensive Care'.

The vehicle pictured appears to be without patient or crew, as the top of the patient's head *should* be visible on the white sheet covered gurney.

With the computer terminal apparrently unattended - and the image 'motion' you describe, it makes me wonder if you were not witnessing a screensaver or some other type of automated Windows demo?

That much said, I have found LAFD mobile computers to have only bare bones features supporting specialty department dispatching and medical system programs, such as those that query hospital beds availability and alert crews of nearby or pending calls.

While the chance remains that some may not have had rudimentary features such as Solitaire removed or disabled, it is important to note two things:

- The computers only query an LAFD exclusive data network and *do not* have direct internet access.

- The single priority of LAFD caregivers is the safety and wellness of those they serve - and not a moving image on a computer screen :)

Again, thanks for your continued interest and observation of the LAFD in action.

Respectfully Yours in Safety and Service,