Your Fear Of Celebration? 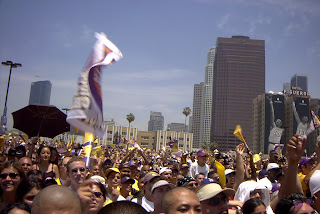 The Militant feels compelled to make this one extra post tonight because he's been hearing this from a lot of folks:

"I'm gonna pass on the Laker parade tomorrow. Don't want to deal with the knuckleheads."

"I'm just gonna watch in the safety of my own home. Too many knuckleheads tomorrow."

"The Coliseum!? That's the worst part of town. F--- that! Stupid idea to have the celebration there. I never go to that side of town!"

What you have here folks, is the "F" word: FEAR.

Look, the Militant distinctly remembers going to Staples Center after the Lakers won the 2000 NBA Finals, and got out of there quick because of what went down (which apparently was much worse than what we saw on Sunday, but thanks to people's short-term memories, no one knows that). More people were arrested and more vehicles were destroyed on June 19, 2000 than on June 14, 2009.

That also didn't stop the Militant from attending the Laker parade a few days later, which went off without a hitch, and save for a handful of arrests, it was a peaceful and jubilant celebration for a team that brought back the Larry O'Brien Championship Trophy to Los Angeles after 12 long years.

For those of you who didn't understand what the Militant said in the past two paragraphs, the Militant will break it down in terms that you can comprehend:

The Militant hopes you have the mental capacity to digest such complex axioms.

If you're not going to the Laker Parade tomorrow because you can't take the day off, no problem! But for those of you who are afraid of "the knuckleheads," then you're part of the problem! Basically you're letting them take over the event, much like people's attitudes towards neighborhoods, parks, and urban nightlife. If you truly are a Laker Fan, then don't let these punks take over YOUR event. This is YOUR event! Don't let them represent YOUR team! Take ownership, have no fear (As a certain Jedi Master once verbalized, "Fear is the path to the Dark Side...") and STAY MILITANT!

The Militant WILL be at the Laker celebration tomorrow at the Coliseum! (Remember to get there Militant Style: Ride your bikes or take the Metro Bus, folks!)

The Militant will leave you with this awesome Laker, the hero of Game 4, known for his class as well as his clutch, speaking from his purple and gold heart:

Commandeered by Militant Angeleno @ 12:22 AM

the lakers suck almost as bad as you, you racist intolerant judgmental hipster in denial. if people don't want to go to the idiotic parade for whatever reason what in the hell does it matter to you? you would't want to be around those timid small-minded racist midwestern transplants anyway. stick with the spanish speaking folks bro, because the spanish language originated in the americas and the language and people certainly werent transplanted from anywhere else, especially not from spain.

Anonymous: LOL! What took you so long?

I went to the Coliseum. I did the right thing, took pubic Transpo (Metro 754) -- I was there for three hours waiting, chatting with random people, only after the smush at Gate 4 to get denied cos my non-telephoto camera looked too big to the tiny little security Nazi.

So I cruised the area for a while before the parade. Gotta say, I didn't see any knuckleheads -- lot of happy people, including lots of families.

One way or another, i seem to have an intimate link with most every soCal riot over the past two decades. Anarchist riot in Long Beach? A vendor at 2000 Dirty Squatters show. Rodney King riots? Subhumans were set to play that night and I was there too. Lakers riot 2000? At Working World Magazine were had a giant print of that photo of a burnt red WW kiosk that had managed to find its way into the front windshield of an LAPD cruiser at the infant Staples Center. DNC2K? I have long since cashed the cheque that the Lawyers' Guild sent me in Brooklyn for my L.A. bruises. And last Sunday? I nearly rode into the middle of it the minute it started, aboard the #4 line.

And lastly, I was aboard the Red Line last Wednesday morning at approximately 0720 hours, wondering if I were in a dream as I gazed at all the purple-shirted yahoos what were directed to disembark at 7th/Metro. Anyone aboard any of those morning trains for the first (or only) time might recall the special message that the train operator afforded them as we pulled into the station.

Perhaps if people had the backbone to stop their few stupid friends from doing truly stupid things, there would be far less reason to wait on the idiot sheriff's deputies to eventually arrive, as well as perhaps shrink their ranks owing to a renewed responsibility that has for far too long been absent among americans of EVERY heritage.
In the end, and in any case, I find organised sports rather stupid—unless I am the one participating and getting ridiculously well paid (and carted comfortably away afterward, while fools rule the roadway and wreck that which is certainly not my concern)—and the majority of the fans sheep awaiting fleecing.

That said, I still think MA's blog ain't bad, and that Anon in remark #1 is a schmuck as well as a coward. Show some backbone, you anonymous ass; if not, shut up.