Angels and the Santa Anas 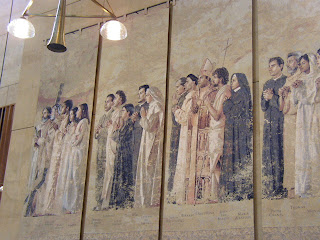 The Militant had to leave the camo at home on Saturday as he attended the wedding of an operative at the Cathedral of Our Lady of the Angels in Downtown. Of course, though he wasn't dressed as a Militant, the Militant was able to arrive at the wedding Militant-style, as he rode the (M) Red Line to the Civic Center station and simply walked across the street (leaving the car at home also had a practical reason, as you'll find out below).

The Militant had mixed feelings about this wedding, as he wasn't exactly 100% supportive of the primary intent of the union, but what's done is done, and all the Militant could do was wish the operative and his new bride well.

No, the Cathedral wasn't filled to its 3,000+ capacity, only the first section of pews had people in it, with much room to spare, plus a small "spillover" crowd scattered in the next section. During the ceremony, a group of tourgoers in the back looked on with much curiosity.

It had been a while since the Militant had stepped into the characteristically 21st-century Cathedral, and for some reason he never fails to find inspiration in the tan-toned tapestries that hang along both sides of the Cathedral's nave, appropriately designed by artist John Nava. The tapestries depict members of the Catholic Church's Hall of Fame from every race and walk of life walking along average people, likewise from every race and walk of life (pictured above).

After the ceremony came the requisite photography sessions in the courtyard garden between the Cathedral building and the campanile, with the muffled white-noise roar of 101 Freeway traffic blaring from just over the wall. The construction crane and launchpad-like girders of the under-construction school currently known as Central LA New High Schoool #9 loomed over the Cathedral plaza's walls, a telling sign that the presence of redevelopment is inescapable in Downtown.

The Militant carpooled with another set of operatives to an undisclosed location in the San Fernando Valley where the reception took place. The roaring Santa Ana Winds nearly beat us into submission as we navigated through the parking lot into the reception hall. Of course, whern there is a wedding reception, two magic words pique the Militant's interest:

Needless to say, the Militant didn't seem to remember much throughout the rest of the night, other than that it included a lot of hollering, dancing and doing rather stupid things while the room appeared to be spinning. He did remember looking out of the window into a panoramic view of the Valley, on a night designated as "Lights Out LA." Of course, even if every household complied by turning off all unnecessary lights for an hour, the visual impact could not be seen as most lights seen from a distance were streetlights.

As the Militant imbibed himself into a drunken stupor, he couldn't help but wonder when or how or if his big day will come when he ties the knot with his own Militant Angelena, wherever she is. The Militant has to admit, being a Militant can get rather solitary at times. Okay, maybe she doesn't have to be a Militant Angelena herself (Come to think of it, the Militant seems to think that kind of marriage would would be filled with constant arguments as to who would be more Militant than the other), he'll settle for a regular Angelena, who would be at least supportive of the Militant's lifestyle. Until then, he'll just have to leave you with a quote from the great Los Angeles band, the Red Hot Chili Peppers. Sing with the Militant now: