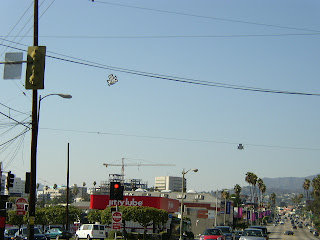 Yes, making three posts in one day is an excuse to make up for lost time.

But after the Militant returned from his Eastside (Happy now, El Chavo!?) adventure, while passing though the uber-hip(ster) Sunset Junction in Silver_Lake, after craning his neck to see the artificially-verdant hills of Griffith Park, hanging on overhead wires above Sunset Blvd, the Militant spotted the worst incident of bird-biting since Ozzy Osbourne's 1983 world tour (pictured right).

W...T...F...is that? Some stupid logo that looks like a backwards "k," an "l" and a forward "k." The Militant means, come ON! The original wire-hanging Berd was cool and all - the Militant took it as some sort of natural/pleasant contrast/commentary on those sneakers hanging on overhead wires (and the public perception of such phenomena). So little painted plywood Berds hanging on wires, secured by padlocks (perhaps representing some sort of confinement or imprisonment) were a cool thing. But this...no really, this has got to stop. Whoever you are "klk"...really, give it up before you embarrass yourself further. Seriously.
Commandeered by Militant Angeleno @ 3:22 AM

funny...i took the bird to be a dove, as in an anti-war protest. certainly you'd endorse a that sentiment, if that is indeed what the klk is, would you not?

funny...i took the bird to be a dove, as in an anti-war protest. certainly you'd endorse a that sentiment, if that is indeed what the klk is, would you not?

Moons of Yavin! Those things are ugly!

oooo and look at that crane in the background! Too bad Russell "Bantha Fodder" Smith cant see that one from his window.

Anonymous: The Militant could see a Berd being an anti-war statement, but not some stupid-ass "klk" logo, the Militant's sorry.

That's the symbol for Kenna, the ethiopian dude who Pharell produced. Pretty sure.

militant: you're right...i took a closer look and it doesn't even resemble a bird. i had mistaken it for a one after having seen a few of those birds dangling from power lines around town.

Looks like Anonymous 10/17 12:18 a.m. wins the prize. Lookie on the left side of this page. BTW speaking of Pharell's cohorts, the Militant may or may not have hung out with Chad Hugo one day in 2004.