The Militant can't believe it, That Time Of The Year is almost here. Yes, 11 days to go until Opening Day at Dodger Stadium.

As every Dodger fan knows, this is no ordinary season. In fact, the Militant just got his tickets to the big March 29 Coliseum Game this week, and the stoke factor is extremely high.

To celebrate the first day of Spring (Winter, YOU SUCK!) and the approaching of Dodger season, the Militant rode to the Stadium on Thursday and snapped a pic of the currently-vacant baseball cathedral (pictured left). Upon arriving, the dude at the gate did a double-take but let him in assuming he was a bike messenger. Of course, this was not the first time the Militant rode his bike to the Stadium, nor would it be the last. In fact, for the first time Dodgers management is accepting the notion of people arriving to the game on bike. Coincidence? The Militant thinks not. Of course, there's still more work to be done in terms of transportation options for the only major sports venue in the United States not served by transit. 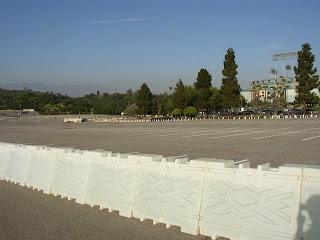 The Stadium looks pretty much the same, with the oversized banners of the much-beleaguered 2007 Dodgers still hanging on its outside walls. There have been small changes to the parking lot, namely the planting of large bonsai-style trees around the stadium and the establishment of traffic flow-dictating plastic water-filled barriers around the lot (pictured right).

As for Torre Time, Kuroda, Nomar's wrist, I Don't Know's On 3rd and Mr. (Andruw) Jones, the Militant will save all that talk until the season begins just days from now. In the meantime, watch this for your amusement:

It's a beautiful day for a ballgame, a ballgame today...

Thanks for the reminder, I got my Coliseum tix this morning.

One question: lower reserved -- way out in right field -- ticketmaster says that these seats don't come with chairs. Does that mean these are benches?

It's been a really long time since I was at the Coliseum for a sporting event (Rams,yeah) so I have no idea what this means.

Miles: Some of the seats are "standing room only" which means you might not have an actual seat. But damn, this is a once-in-a-lifetime thing, the Militant wouldn't complain one bit if he didn't have a seat, you're privileged to be in the Coliseum to see this event.

truer words never written. when i told one friend of the purchase, she literally jumped up and down and clapped rhythmically. i blushed with success.

Beisbol very very good to me!!!

Valleypinoy: That's sooo wrong. If Hideo Nomo or Takashi Saito were on the 1986 team, they probably would have made him say, "Wax On, Wax Off!"

No human should ever have to watch Orel Hershiser or Jerry Reuss doing the air hump. I have to go wash my eyes out with gasoline now.