Crash Scabs: Who Cleans It Up? 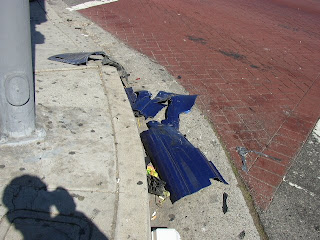 You've seen it before. Car moves, car moves a little too fast, car brakes, yet not quite in time - car hits another car. Skid, crash, bang.

The two parties emerge from their vehicles (hopefully), words (often obscenities) and license/insurance (hopefully) info is exchanged, law enforcement arrives, a report is made.

Thus is the routine when there is a car accident.

Under more serious circumstances, the paramedics and a fire truck arrive. But let's just assume that the only physical damage was some rattled nerves in this case.

AND WHO CLEANS IT UP?

Yes, the Militant is ranting now, which is a good sign that he's gonna be more consistent in making his blog posts from here on. But aside from that, who's responsible for cleaning it up?
The accident parties certainly don't care, or might have more serious concerns. The fire/paramedics don't unless there's some sort of conflagration. Law enforcement? Maybe they'll take an entire bumper off from the road, but the little bits and pieces...that's probably up for the wind and rain to take care of.

No, the Militant isn't just bitching because he rides a bike a lot and runs over these things frequently, hoping to avoid a flat, but the Militant, also a motorist as well, doesn't like to see little bits and pieces of metal sticking out of the tires of his car, which just means another trip to the local neighborhood tire repair shop.

So folks, we gotta work out some sort of method or system for cleaning up auto crash scabs from our roads. They're unsightly and represent blight. They're bad for cars, motorcycles, bicycles and pedestrians alike, representing a public safety hazard. The Militant recommends either the police or city vehicles track each accident upon their reports and have a cleanup crew sweep up , pick up or even vacuum the debris up with some powerful machine that sucks tremendously (...um er, why does that not sound right?) . This crap is everywhere.
Commandeered by Militant Angeleno @ 6:34 PM

This stuff is everywhere, but have you noticed it doesn't collect? That is to say, there isn't more of it this year then there was last year. If no one cleaned it up it would just collect until it clogged the streets.

I'm guessing it gets pick up by street cleaners during their normal rounds.

I'm guessing somebody some pissed off biker sweeps it into a storm drain.

You can always call 311 and they'll have Street Maintenance come out and clean up the mess.

I can see the militants shadow!

anonymous: That may or may not be the Militant's shadow.

Who cleans these messes up? That's supposedly among the responsibilities of the city's Public Works Dept.--which considering the taxes we pay, should be doing a far better job -- not only collecting crash debris but the scores of sofas, mattresses and other "bulky items" that find their way onto the streets of my Echo Park neighborhood. (Ahhh, but I ramble like some old crank...)