Filipinos in Hollywood in Historic Filipinotown 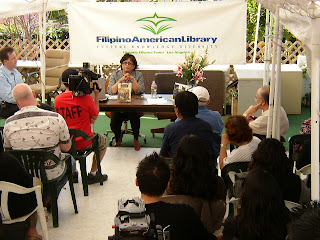 Three things rock the Militant's world: Culture, History and Los Angeles. Put the three together and you get...well, you get This Here Blog.

But aside from that, when an operative of the Militant tipped him off about a launching of a book on Saturday covering the history of an ethnic group in Hollywood, the Militant got his ass on the bike and rode down (and up, and down again) Temple Street to the Filipino American Library. 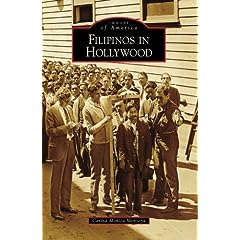 The library, located in a residence just shouting distance from the iconic The Original Tommy's burger stand, hosted a well-attended backyard reception for the book launch of the Arcadia publication, Filipinos in Hollywood. The author, Carina Monica Montoya, was there to do a "reading" (which wasn't a reading insomuch as it was the author's live commentary on certain aspects of the book, which like many Arcadia books, is mostly historical photos with descriptive captions).

The Militant, has some Filipino operatives, a few of whom even live in Hollywood, but he may or may not have been aware there was already a long history of Filipinos in Hollywood -- both the community and the industry.

A great deal of the book shows photos and descriptions of the lives of Filipino immigrants in Hollywood since the 1920s, most of whom were men who worked menial tasks as busboys, waiters, cooks and janitors, who were allowed to work in and around the glitz and glamor of Hollywood, yet as individuals outside the job they had to face the harsh realities discrimination and prejudice.

Montoya highlighted the late Ray Buhen, a Philippine immigrant, who worked as a bartender in the swanky establishments of the Hollywood of yesteryear, such as the old Polynesian-themed Don The Beachcomber on McCadden Place. It was there that Buhen invented the Zombie cocktail (but which was historically credited to Beachcomber owner Donn Beach - since back then immigrants never got credit for anything), a drink which was served to many a celebrity back in the day. Eventually in the 1960s, Buhen opened his own bar, the Tiki Ti bar in the East Hollywood-Los Feliz area, which is now run by his sons.

Montoya also mentioned that the book highlights modern-day Hollywood celebrities of Philippine descent, such as Lou Diamond Phillips (RICHIIIIEEE!!!), Tia Carrere (Schwing!), comedian Rob Schneider and The Black Eyed Peas' Apl De Ap. There were a bunch of folks in the book the Militant wasn't familiar with, but it was great to see something that gives a community a semblance of pride.

Before arriving at the book launch event, the Militant stopped by a Filipino market on Temple Street to get his own taste of Historic Filipinotown. Thirsty after his bike ride, he bought some tropical fruit juice drinks -- a can of guava juice and another juice can of a Philippine citrus fruit called kalamansi, which was pretty refreshing. And best of all the two cans cost the Militant all but $1.48 (Militant Deal!) of course, upon arrival at the library, there was some free Filipino food there, such as lumpia egg rolls and pancit noodles courtesy of a local restaurant. He almost forgot that it's customary for there to be free food at Filipino community events. So maybe he'll hang around this neighborhood more often. 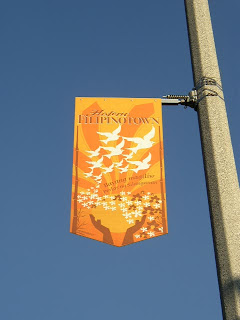 Speaking of the neighborhood, he noticed it had these tiny community street banners (pictured right) hanging from the light standards (that's "streetlights" in bureaucratic-ese), which appear to be new. Thing is, they seem impossible to see driving 35 miles per hour in a car, much less at night. According to one of the Militant's Filipino operatives, the written inscription in the middle (below the birds), which reads "Bayang magiliw/Perlas ng Silanganan" is the first two lines of the national anthem of the Philippines in the Tagalog language, which translates as "Land of the Morning/Pearl of the Orient."

Like the Militant always says, you see and appreciate much more from the seat of a bike.
Commandeered by Militant Angeleno @ 11:52 PM

Is that kalamansi or calamansi? I've seen it with the C.

Darlene: You might be right, but that's what it said on the can. The Militant's knowledge of Filipino culture primarily comes from what his Filipino operatives have taught him.

If you enjoyed the "Filipinos in Hollywood" book launch, come to the book launch of Carina Montoya's new book, "Historic Filipinotown."

Of course there will be free food (standard fare in any Filipino event). The book launch is going to be held on Saturday, April 4 from 2:30 pm - 4:30 pm at the Lake Avenue Park Community Center (on Lake between Temple and Beverly) in Historic Filipinotown. For info, call the Filipino American Library at 213-382-0488. I'll even bring fresh calamansi (spelled with a C) from my garden and make you some fresh calamansi juice.