The Exhibition at Exposition a.k.a. DODGER-CON '08! 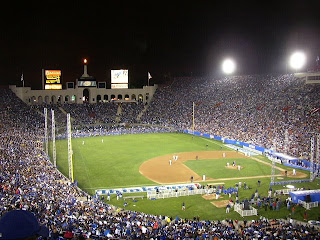 The Militant, along with 115,249 other Dodger Fans (and about 50 Red Sox fans) made history Saturday night as the largest crowd ever to watch a baseball game.

The Los Angeles Memorial Coliseum contained a crowd the size of two Dodger Stadiums, with enough left over to fill the Kodak Theatre.

Though the Dodgers lost 7-4, it didn't matter much since not only did the game not count towards the standings anyway, but the Militant, along with others in his generation and younger, simply went for the experience of watching a baseball game at the Coliseum. Besides, never before had so many Dodger fans, decked out in blue, assembled in one place before. From the moment the first tailgate canopy went up to the last person who got on the shuttle bus back to the Dodger Stadium parking lot (which should have been about 4:10 a.m. on Sunday morning), the whole day could have been called, "DODGER-CON '08!"

Perhaps the most storied of existing sports venues in the world, the Militant doesn't have to tell you the Coliseum hosted two Olympics, the first Super Bowl, a World Series, international soccer events, motocross, popes, presidents and rock concerts. But he just did.

But for all that history, watching a Dodger home game at another venue aside from The Stadium sure messed up everyone's baseball game paradigm.

The differences skewed with everyone's senses.

At the Stadium, the scent of Dodger Dog vapors and the aroma of beer fills the air. At the Coliseum, there were no Dodger Dogs (well there was a facsimile called the "Colosso Dog," also of Farmer John stock, but still not a Dodger Dog) and pre-game, the prevalent scent was the smell of kettle popcorn. The addition of funnel cake and other sorts of food stands gave the Coliseum a county fair-type atmosphere. But at least some of the booths, such as the nachos and jumbo dog booths, gave you a hefty portion for your money.

The acoustics were markedly different, without the reverberant concrete hallways under stadium tiers to amplify the sound, and with the Coliseum seats slowly rotting away, perhaps no one wanted to band their fists on them. The Militant was expecting deafening roars from the crowd, but it didn't really sound that much louder than a crowd at The Stadium.

It was also clear that the Coliseum's public address system was more antiquated than that at The Stadium, with Dodger announcer Eric Smith's trademark baritone voice missing a great deal of its characteristic bass. Even organist Nancy Bea Hefley sounded different, without the luxury of her Roland Atelier organ, she was relegated to playing a standard keyboard instrument up in the cruise ship-like Coliseum press box structure. And the Coliseum's scoreboard and videoscreen were less-than-adequate substitutes for the ones that loom over the Stadium Pavilions.

The Coliseum crew, decked out in yellow rain jackets, were way more chill than the Bermuda shorts army that tends The Stadium. When beach balls were thrown throughout the stands, not only did the Coliseum crew tolerate it, they helped hit the balls over the crowd! They weren't as chill when it came to fans in the extreme top row of the Coliseum taking down the blue and white Dodger flags that adorned the rim of the venue. Watch for them on eBay soon! 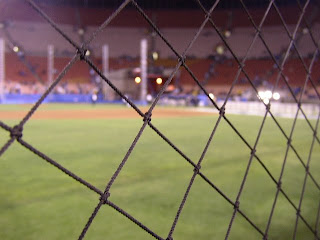 With no Pavilion section, where was the rowdy crowd to be seen? Where does The Wave generate? Never feat, for the section behind the 60-foot high left field (or lack thereof?) screen played the surrogate role of the Pavilion section on Saturday night. Of course, the dimensions of the field (and that dang screen) needed no mention. Neither did the 5-man infield the Dodgers decided to play. But hey, James Loney will go down in history as the only post-1961 Dodger to hit a Moon Shot in the Coliseum....

Most importantly, the Dodgers' Think Cure! charity raised at least $1 million for cancer research, which directly benefits Children's Hospital Los Angeles and The City of Hope.

But Saturday night had all the trappings of the right kind of event for the Militant -- The Dodgers, Los Angeles history and tons of Angelenos there to share in the sheer excitement (and also for the Militant to conceal himself in so he won't get noticed).
Commandeered by Militant Angeleno @ 12:52 PM