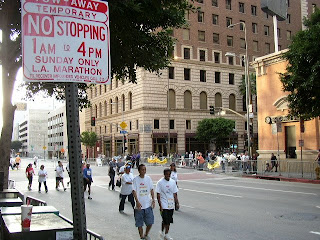 At the Los Angeles Marathon XXIII on Sunday, the media passed around names like Tatiana Aryasova, Laban Moiben, Christopher Kiprotich, Yuliya Gromova or Khalid Kamal Yaseen - the l33t runners who started at the head of the pack, got followed by camera crews, clocked in between two and a quarter and two and a half hours and won some cash and a new car. They came from the heights of Kenya or Mexico or the colder climes of Russia.

Not to downplay the l33t runners' achievements, but for the Militant, the real heroes of the Marathon were people who were named Peter Fledman, Yun Kim, Jose Ortega, Melanie Garza or Varouj Abkian. The only cameras that followed them were digital cameras, cellphones and camcorders from their loved ones, they clocked at around seven or so hours and came from such exotic locales as Sherman Oaks, South Gate, Garden Grove, Cerritos or Boyle Heights. They were handed a medal just like the other 17,046 people who finished. For the last .2 mile, they walked, hobbled, jogged and even made a mad final dash. There were students in teal t-shirts, a senior citizen in a shirt that read, "Life's Reward Is A Marathon," first-timers and even people who would probably never do it again. When they arrived Downtown towards the finish line, the large crowds and hubbub of earlier in the day had long dissipated, the cameras have gone back to the stations, the bands had long packed up their gear. But the cheers of their loved ones that reverberated though the concrete, steel and glass canyon of Flower Street charged the runners to see them through the last stretch. There was no stopping now. The clock read six, seven, even eight hours since they left Universal City, but it didn't matter one bit.

They did it for the experience.

The Militant salutes them.
Commandeered by Militant Angeleno @ 2:17 AM