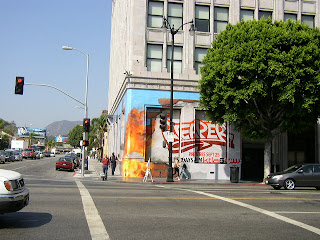 Fall is approaching - you can see it in all the advertisements for all the new television shows making their debut for the Fall Season, all starring a bunch of white people whom the East Coast-based media powers that control us all (well, most of us) believe you should be caring about.

While biking up Cahug-Na Ave on Tuesday afternoon, right on the corner of The Boulevard, the Militant happened on an entire south and west wall of a business, gaudily clad in ad-wrap (pictured right). The south wall carried the name of the TV show coming to the CW (the Militant won't be a mouthpiece for the networks, so find it out yourself) while the west wall was emblazoned with large photos of its Caucasian cast placed in the archways.

Similarly, a block south on Cahug-Na and Selma avenues was another south/west-facing advertisement for some new NBC shows with their own Anglo actors. This time it was a tarp stretched out on the second floor above Caffé, Etc.

Oh and BTW, no, the Militant didn't cause that little event on The Boulevard on Tuesday.

Now, Sunset Strip billboard ads are an institution. Ads can inform and entertain. Even buswrap ads have become part of the urban landscape. The Militant isn't against all ads. In fact, he'd love to see more on the subway -- it forms a contemporary motif that plays itself out in front of you and documents itself over time. Sure companies can and should get creative in promoting themselves, but, like all things, it can go too far. Water is good for you, but you can still drown in it.

Worse yet, the Daily News just did a story on parking stripe ads for a certain ABC show starring a bunch of white people (okay and one Latina...no, not that one, the other one). So yeah, when you're hauling your groceries into your minivan at Ralphs, you're reminded to to tune in every Sunday night.

Does it really work?

The Militant is sure that many people are now trained to just tune it all out. They see an ad and become apathetic to whatever is being sold. We also learn to tune out other annoyances, like dumping our junk mail straight to the blue bin (tip: anything in the mail with a return address from "Wilmington, DE" is junk mail. Even if you have friends and relatives there - into the blue bin it goes. Hey, better safe than sorry). Also, when our landline phone rings, 90% of the time it's a telemarketer. The Militant just picks up the receiver and hangs it up right away when his landline phone rings. A legitimate caller would make another attempt to call you back.

Of course, there are those who fall for such annoyances hook, line and sinker. Guess they make the world go 'round, eh?

Perhaps one day we'll be so steeped in ads ("Hey look, there's a dog food ad on my cuticle!") that the raw aerosol lines of a graffiti tag would be a welcome sight, relatively speaking...who knows.

Perhaps this is all just a part of that 21st Century malaise. But that's a topic for another day.

Meh.
Commandeered by Militant Angeleno @ 1:42 AM

Not really related to this blog, but how the heck can a person be invited to LA city nerd?

Well not only will you see non-white faces on TV, how do we know if non-white script writers and producers are used?

Maybe there is some West Coast clout when major movie and TV productions are based here at the West Coast (Vancouver is a different matter?)

you've got to be kidding me...complaining about what you see as a dearth of minority actors on the idiot box? you want to see people of color then why don't you tune into bet? won't see whitey there. or how about any of the tens of tv stations that broadcast only in spanish--which, by the way, keep brown people down more than the man ever could. think about it--why learn the language of upward mobility in this country--english--when you could easily tune in and get the news and watch novellas in your own mother tongue?! heck, let's just go to the mercado and read la opinion for that matter! c'mon man...wake up.

Anonymous: Wow, the Militant is honored that The Man himself actually reads this blog!

i ain't the man, militant. i just work for him.

Anonymous: And you're the Employee of the Month.

i do read the blog. i need my entertainment; the juvenile, bleeding heart liberal views contained herein make me laugh. your assumption that people like me wish people like you had no voice is not only erroneous, it's completely baseless. you don't even know me!

keep slinging mud, because we both know you have no argument against my original comment.

As a sometime wannabe screenwriter, I can say we write scripts with white people in them because the big-name actors are mostly all white... I'd love to see that change, but I think it will be a slow process.