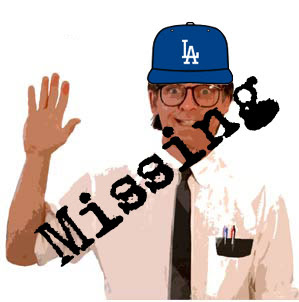 Though the Militant hasn't posted since Saturday, he is alive and well and blogging again, albeit with an uncharacteristically succinct post. However, many (the Militant assumes many) are wondering what happened to the other great anonymous Los Angeles blogger, Los Angeles City Nerd (pictured left -- Disclaimer: Portrait is only a dramatization and not intended to depict the actual City Nerd).

The Nerd's whereabouts were in question after an absence of nearly two weeks in late July-early August. Many loyal readers noticed the Nerd isn't as prolific nowadays. Now the Nerd's page reads, "This blog is open to invited readers only."

Has the Nerd gone all Hollywood club VIP on us? Has the Nerd been beaten up and delivered a wedgie by Los Angeles City Jock (lol, there's no such blog, it just looks kinda cool to have a hyperlink there)? Site redesign? Alien abduction? Subpoena?

Or worse: Was the Nerd's identity revealed?

Lest you think there's some blue state-red state/Dodgers-Giants/ Great Taste-Less Filling/ Tupac-Biggie Smalls/ Paul Dateh-Miri Ben-Ari rivalry between us, the Militant will assure you that is simply not true. Though the Militant and the Nerd don't exactly hang out at Lakers games, Downtown bars or even The Huntington Library together (though it's possible the Militant and the Nerd might have crossed paths earlier this month, hmmm), without the Nerd, there would be no Militant.

Though "Los Angeles City Jock" would be an AWESOME name for a sports blog...
Commandeered by Militant Angeleno @ 11:02 AM

I've been wondering about this very thing. The drastic change in access to nerd's blog is definitely cause for concern. It would be a shame if it's permanent.

Oh my God, I just emailed him about that.

I was freaking out.

And I wanted to ask if he knew an easy way to figure out all the zip codes in CD 11 on the LA City website.

Well that's odd. One less for the blogroll, it appears.

The Force was not with that Nerd. Simple Jedi Mind Trick and his identity was revealed.

LA Bus Girl: The City of Los Angeles' website? LOL, the folks at the Information Technology department aren't that savvy to implement such features.

You're going to have to consult the USPS site or similar zip code map. Remember, Rosendahl's site lacks a district map, but CD11 has relatively simple boundaries: Mulholland on the north, the 405 on the east, Imperial Hwy on the south and the coast or city of Santa Monica on the west.

Hmm, maybe the Militant can be the Nerd during the Nerd's hiatus...

Oh, trust me, I know that LA City wouldn't have anything remotely that useful... but googling for a while got me nothing and I wasn't feeling the match up the map game.

Those were basically the zip codes I needed. Thanks!

The other day day he had some odd statement on his 'status' on my gmial quick links section. I can not recall exactly what it was - but is was something like - good -bye. So IM'ed him but got no response.

And is his identity really supposed to be a secret? I've seen him live blogging twice at events - one of which I held, but I did not disturb his privacy.

even brady knows who the nerd is , lie I do .

We all know it is you militant angelino...

I think we have all , amongst ourselves, at various blog events have hinted to each other we think nerdo is you.

dgarzila: The Militant is normally not willing nor able to comment on who he is, assuming he is even one person, or even a human being, for that matter. But the mathematical likelihood of the Militant also being the Nerd is very small. The Nerd has already accrued a certain level of notoriety long before the Militant began to post. And why would a person want to have more than one blog anyway?

Though the above statement may or may not be an actual denial, or non-denial, for that matter.