When the Hero Takes a Fall 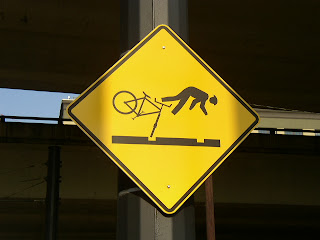 Bicycle Safety Lesson #313: When a large insect lands on your arm, pull over and stop before attempting to flick it off.

Being a Militant Angeleno has its advantages -- you get to see the city the way other's don't (or can't). A Militant hardly gets stuck in traffic, since a militant uses alternate methods of transportation, and even when a militant is driving, a militant knows all the shortcuts.

But being a Militant definitely has its risks. Last night while the Militant was riding solo along Sunset Blvd in Silver_Lake on the well-marked bike lane, the Militant suddenly noticed that a large insect landed on his left forearm. Having been exposed to jungle combat, the Militant is usually not squeamish about bugs, but this one was HUGE - it was either a moth, a large cricket or some yet-unknown species of insect which employs biting/blood sucking/stinging as a defense mechanism. The Militant instantly though of the latter.

So he shaked off his left arm, but to no avail. The insect was still there, perhaps feeling the resistance, was ready to bite or insert its sharp proboscis or stinging mechanism into the Militant's epidermis. Imagining that for a split second, the Militant, in a most knee-jerk reaction, took his right hand off of the handlebar and slapped his left forearm and...

The handlebars of the Militant's bicycle turned off-course, then the forces of the Earth's gravity sent the Militant towards the ground, as his bicycle parted ways with his body, temporarily becoming airborne from the kinetic energy imparted by the separating motion. The Militant's bicycle landed on the hard Sunset Blvd asphalt, as did the Militant, who used his palms to break his fall as he landed face down onto the street.

Fortunately, there was no crunching sound, nor thud, nor screaming in excruciating pain, but he did feel the breaking and swelling of his blood vessels in his right leg, which bared a raw round scrape, and in his top lip, which was both bleeding slightly and at the same time was swollen from the inside due to the force of the Militant's front teeth being forced against it. And yes, the Militant was wearing his helmet.

Even in the shower and when he goes to sleep.

The Militant dabbed his bleeding lip with a tissue and doused it with his water bottle, while passing by the Silverlake [sic] hipsters spooning their powdered-flavor base Pazzo Gelato on the sidewalk, too cool to care about another human being's welfare to even utter a default, "Dude, you alright?" (but what else does the Militant expect). This militant warrior was wounded, but still strong enough to make it back to the compound to rest and prepare himself for the onset of even more aches which would come his way come morning.

And does it ache. The Militant's right arm doesn't seem to straighten out normally due to the inflamation of his joints. He might have to sit out this Friday night's Midnight Ridazz ride to the Santa Monica Pier as he's placed on the 15-day DL. Typing is definitely not as comfortable.

Lest one of you readers read this and go, "ZOMG! Biking is so dangerous! I better not bike and stick to driving!" (Shyeah, right, like no one has ever been in a car accident...). But the Militant has been able to avoid a bike accident in 20 years (when he had a similar stupid accident (didn't involve a bug though) but back then he did not wear a helmet, which resulted in a minor brain hemorrhage and a week's stay in the hospital).

The Militant is keenly safe and aware and unlike some Midnight Ridazz kooks, he prefers not to ride inebriated (oh they'll love that in Beverly Hills). So the only reason why this happened?

The bug of unknown origin was most likely a mechanical man-made device or holograph designed specifically to distract me from the road, resulting in this accident, thus keeping the Militant off his bicycle to perform his militant activities. Yes, they would rather see the Miitant living in the monotonous suburban sprawl of The Far East, driving 25 minutes from his cookie-cutter Lennar-manufactured home just to visit the nearest Chick-Fil-A drivethru.

And because of the Militant's reputation, his enemies, no doubt connected to clandestine organizations run by the hegemonic East Coast media plotted their "Operation Militant Spill" on the streets of Silver_Lake, in front of an audience of hipsters, who were paid by these powers that be to partake in some free entertainment for their pleasure (because premeditated bicycle accidents are the new performance art). But the Militant is flattered that he is enough of a threat to his enemies that he was worth their time to try to stop. But they can't stop this Militant, oh no.

The Militant will ride again. And don't you damn forget it.
Commandeered by Militant Angeleno @ 1:27 PM

Ouch. A dimbulb opened his car door in front of me on Sunset in Hollywood (too) many years ago, & I went over the bastard's door & had a nice stitch next to my eye. (No bike helmets in those days.) The frame of my bike was bent, & I've never gotten another, sticking w/ foot, SCRTD/LACMTA & cab ever since. Remember, a bug is sometimes just a bug. If someone had opened their door in your path that might be another story. Hope all heals soon.


Strong the Darkside is in Silverlake. Not so much in Silver Lake though.

I was hurt in a kick scooter accident a month ago, but today was the first day back on the scooter.

At least you are still young and will recover faster?

If it was a bee, they can only sting you once, but I don't know about bumblebees....

Philpalm: The Militant's recovery is progressing rather well. Though he cannot give his age, he is no youngin', yet he's no member of the GHP either. But relatively speaking, way more closer to youngin' than GHP (at least that's what the Militant thinks!)

Let the Militant guess - was the kick scooter accident due to uneven pavement? A neighbor of the Militant's got into a bad fall whilst riding in a Segway (!)

But congrats on returning to the scooter.

It was no bee, bees aren't that huge. It looked to either be a moth, a wasp or a cricket. Or even a genetically-engineered hybrid of the three designed to cause a Militant to freak out a Militant cyclist and cause him to lose control.

I'm sorry you crashed and am glad you are better.

The combo of the graphic you chose and the intro with "insect on arm" made me chuckle. I felt I didn't need to read any more, you had provided a beautiful mini-movie in my mind.

Most of all, thank you so much for saying "Visual Effect" and not "special." For those of us in the biz, it makes a difference.