Just Can't Pass This Up 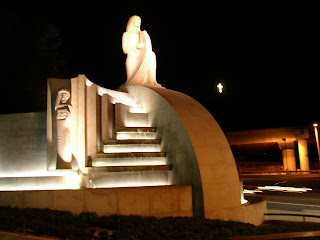 The Militant is in busy mode again, with both Militant and Extramilitant activities under his belt. Sometimes there's just not enough time to blog, especially in the Militant's characteristic word-dense style.

Sometimes the Militant is a slave to his little Militant-cam. He feels he's obligated to take it everywhere he goes, just to capture something that's worthy of interest to you readers of This Here Blog.

So on an unspecified evening last week, the Militant went to some event in the Cahuenga pass, expecting the miniscule parking lot to be more-than full, and likewise the preferential parking district to be restrictive. So what's a Militant to do? You know.

A quick subway ride to Universal City and a short bike ride up the Pass got the Militant there for an activity, recommended to him by Militant Operative Blackbird. When it was finished, he decided to ride the rest of the way back to the compound, it was mostly downhill anyway.

The Militant passed the entrance to the Hollywood Bowl (pictured above), most notably, the illuminated 67-year old George Stanley art deco fountain, upon which stood the Muse of Music statue, recently restored to beyond-its-former-glory (of course the Militant, nor even his parents, were even alive back in 1940 to know).

Of course, appreciating it from a car is but a brief, fleeting glance (unless you were stuck in traffic there), forced by the combination of downhill gravity along the northern end of Highland Avenue and the low-level of traffic that night.

On a bicycle, of course, it was a quick, spontaneous U-turn, and the Militant was even able to witness it from a different angle.

Granted, the Cahuenga Pass isn't the most bike-friendliest of routes. A certain sidewalk-less section where cars zip by at near-freeway speeds feels harrowing to even this Militant. Other notable two-wheeled bloggers have faced other kinds of challenges on their own just a few miles south.

But history points out the full perspective: For the early pioneers of this town, traversing the Pass on stagecoach wasn't all that easy, either. Boulders and rattlesnakes stood in their way and many were thought of as crazy for riding through the pass. Yet they literally and figuratively paved the way for Angelenos today to travel "over the hill." So maybe for us bicycle folk, we are urban pioneers in our own right, riding on the difficult path to make it easier for those in the future to ride on.
Commandeered by Militant Angeleno @ 4:40 AM