The Whole Town To Ourselves 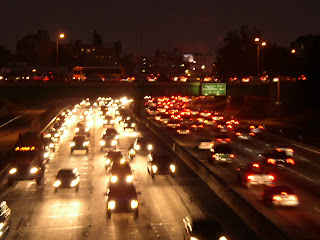 Despite the colder weather, the Militant cherishes the Holiday season. Why? Because most of those rootless, SoCal-hating transplants have gone back to where they came from (Okay, so a few natives are part of the huddled masses yearning to leave town). There's less traffic, less hassle, less 'tude, less whining and overall less negativity in the air. Seriously, you can feel it. It's like the natives have taken back the town for a while. Most of all, it's nice, quiet and peaceful.

Some of us natives have our own T-giving traditions. In the Militant's familiy, he and his siblings usually go to Hollywood to watch a movie on Thanksgiving night or on the Friday after. One of the Militant's operatives hosts a little "Trivia Party" on the Friday after where we whip out the Trivial Pursuit and related games and have a go at it. Any of you stay-in-towners have your own traditions? Comment and share.
Commandeered by Militant Angeleno @ 1:21 AM

If you are a truly "rootless" transplant, there is no "where you came from" better than LA. Some of us are staying right here all weekend and lovin' it!