The Militant's Friday Adventure, Part 1: Transit Adventures in the SGV 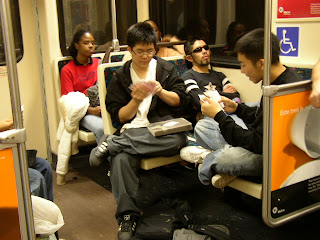 One of the reason why the Militant takes the Metro is that it just makes for a better story.

The Militant decided to visit a store in Temple City, out in the SGV, which he hasn't been to in several months. So he drove down the 210, but it was slow. Then he went to the store. After he left, he hit more traffic. !@#$%^ traffic!!!

See what the Militant means? So he got on the (M) Red Line, iPod in ears, and headed Downtown. After boarding, he saw three dudes bide their time on the subway by playing a game of cards (pictured above). It just looked so interesting that the Militant couldn't resist snapping a photo. "Smile! You're on Militant Camera!"

By the time he reached Union Station, already plastered with those huge-ass Latino 96.3 FM ads, he headed up to the ground level of the station and was greeted with the mad rush of people heading to, leaving from or transferring between trains (pictured right). People in Los Angeles don't take mass transit? LOL.

The Militant was one those people, transferring to a Gold Line train, as the squeals and clatter of the much-larger Metrolink commuter trains rolled into and out of the station, adding a semblance of old-school railroadiana to the environment. As his connecting light rail trip headed north, the Militant visually recited the various sights along the way: The private rail coach yard below at Union Station, the new Homeboy Bakery near the Chinatown station, the swallows' nests along the walls of the Broadway viaduct, the new Italian-made rail cars waiting in the Gold Line yard, the "UFO" sitting in a Cypress Park junkyard, the "bird zoo" in the backyard of an apartment just before the Southwest Museum station, the Avenue 50 art studio just before the Highland Park station...though it's sadly the least-patronized line, it's the most visually interesting line in the entire system. 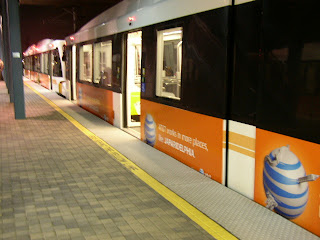 As the train rolled into its terminus at Sierra Madre Villa, there was already a long, painfully slow line of cars packed on the eastbound 210. The Militant was glad he decided not to be a part of that crowd. He also noticed that nearly all the Gold Line cars now have these orange AT&T (oh sorry, at&t) wireless ads (pictured left), touting reaching places like "JAPARIDELPHIA" or "NEW LONDAKOTA" (what, no "LOS MEXIKONG?" damn their bias!).

The Sierra Madre Villa station (or "SMV" in the Militant's shorthand, not to be confused with "VSM," which is the Vermont/Santa Monica station on the Red Line) is one of the most unsusual in the entire system, as most of it consists of a parking structure, which is more of a familiar sight in Frisco's BART system up north (ironic, eh, in the supposed "land of cars"). After a 4-level elevator trip down to street level, and a short wait, he boarded a (M) Local Line 266 bus headed to Lakewood.

Of course, he wouldn't go nearly that far. Instead, it was a 15-minute trip down Rosemead Blvd to Temple City.

The Militant was pleasantly surprised at what he saw - people riding bicycles! In low-rise suburbia! And these weren't just neighborhood kids going for a joyride. He spotted a bicycle commuter, with bags hanging on both sides of his rear wheel, riding westbound down Huntington Drive. The Militant only thought city folks did that. Amazing...

He disembarked just past Las Tunas Drive, which was a little bit too much past the intersection than he would have preferred, but this is the SGV, so one can't complain here. After a few blocks walk, he had reached the store, run by an acquaintance of the Militant's, who said, "Now there's a face I haven't seen here in a long time!"

For reasons to protect his identity, the Militant could not divulge the name or nature of this shop (lest you think it's a pr0n shop, just remember it's in freaking Temple City, aite?) .

But after all, it's the not the destination that's important here, it's the journey.
Commandeered by Militant Angeleno @ 9:17 PM