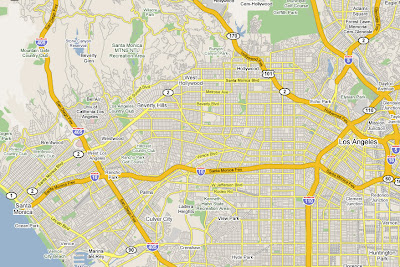 The Militant didn't think people would bother to comment on his little night trek from his compound to Mid-City and back (especially being a picture-less post). Or maybe people were just hungry for a new Militant Angeleno post? In any event, commenters like Chris and Will Campbell (a Militant velocommuter in his own right) offered suggestions for their own routes to get through long distances in this City. As any cyclist (or non-braindead motorist) would know, each street has not only their own vibe, but infrastructure characteristic -- some are wide, some are narrow, some are flat, some are hilly, some are dark at night, some are well-lit, some have stop signs, some have traffic lights, some are blocked by constant cross-traffic, some are well-paved, and some have enough potholes and paving distortions to overwhelm the local councilmember's office (if they do care).

So the Militant will throw this out to you readers of the two-wheeled persuasion (as well as those who are bike-curious): What are your favorite cross-town routes to take when traveling distances of over 3 miles? Today, we'll tackle the West/Central region of Los Angeles. The Militant knows any notion of "Westside," "Eastside" etc. etc. is gonna cause some varying opinions among people (Though th Militant will let you know that the Westside begins at La Cienega, the Eastside begns at the Los Angeles River and everything in between is the creamy, juicy Center of this town!), so in the spirit of transportation and mobility, we will more or less follow Metro's Westside/Central sector: The Santa Monica mountains to the north, The Los Angeles River to the east; Slauson Avenue on the south and the Pacific Ocean to the west (pictured above).

Comment on your favorite long-distance routes and the Militant will come up with some sort of map in the near future. Use the handy Gmaps Pedometer site to mark your biking thoroughfares of choice and post the links in the comments. Also try to note street width, road conditions, terrain, night conditions or other factors. These apply to major arterial streets as well as residential streets, and designated as well as non-designated bike lanes. Get to it!

The Militant will follow this up with a map of the routes, as well as future calls for recommended routes in the SFV, the SGV, the Eastside and NELA, South Los Angeles/South Bay and the 562.
Commandeered by Militant Angeleno @ 12:45 PM

My fave east/west route to get to the beach from Silver Lake has to be Fountain Avenue, which runs from Sunset all the way to La Cienega. From there I'll drop down to Santa Monica to get through West Hollywood and then just immediately west of Doheny to get off of suddenly bike-unfriendly SMB I'll dive right up to Carmelita (aka: Beverly Hills Bike Boulevard), which arcs across to Wilshire at Santa Monica. Then I'll get back on Santa Monica and traverse across the new bike-laned transit corridor and pretty much take SM all the way to the beach. Gmap link.

Coming back from the beach I'll usually go north on Ocean to San Vicente and let that bring me all the way back to Westwood where I'll probably ride Wilshire back into Beverly Hills and then get on Little Santa Monica to Burton Way and end up either on Beverly or 3rd. Gmap link.

If my destination is mid-city or lower I'll most likely utilize the length of 4th Street (Gmap link) between Vermont and La Brea and then roll south on La Brea to Redondo which takes me past a variety of east/west routes such as Venice or Washington Adams or Jefferson boulevards).

To get to work in Westchester in the mornings I'll either utilize 4th Street to La Brea to Redondo or go down Hoover to Jefferson and take Jefferson across La Cienega where I either decide to stay on Jefferson or take a respite along the Ballona Creek bikeway and ride that into Culver City getting back onto Jefferson and heading onto Sepulveda for the last stretch. Gmap link.

Of late I've actually been coming back from work along Washington out of Culver City all the way over to Vermont (Gmap link). I like Venice Boulevard with its bike lane well enough, but there's something nicer about Washington. It's wider and less traveled by the vehiculars.

Last but not least, when I was temping in El Segundo I'd get there by bike down Vermont to Exposition across through Leimert Park and up Crenshaw to Florence across Inglewood to Aviation and down to Imperial Hwy south of the airport. Gmap link.

Will: Thanks for sacrificing your lunch hour in the name of Militancy! (lol). Some of your routes were obvious ones, but CARMELITA!!!! WOW! Routes like that are the precisely holy grails the Militant is looking for! The Militant has biked the SMB diagonal through Beverly Hills and yes, it's pretty harrowing, especially with Metro Buses nearly scraping against you. Thanks for the tips. Those are definitely going on the map.

Speaking of Eastside/Westside debates, many African Americans living in South Los Angeles call the Central Avenue area (the original South Central) the "Eastside." Just wanted to throw another monkey wrench in the debate.

The eastside/westside debate only exists in the minds of the eastcoast and midwestern transplants to our City. The regions in the City define as eastside, westside, southside etc. have subregions within them. Referring to Central Ave. as "eastside" is not far fetch, in that the area is the eastside of South-Central L.A., now labeled by the City as South L.A. I for one, being from Boyle Heights and having grown up in the eastside see everything west of Downtown L.A. as the westside. And indeed if you look at the name of the parks, streets and institutions, from court houses to libraries, in that area they are all designated as "west" or "western branch". I for one see the westside, everything west of Downtown L.A., as being a huge region, stretching from immediately west of the Central City to the ocean, that should be separated into three areas. Near westside, Mid City and Far Westside. The area around West Lake Park err.. MacArthur Park I always refer to as West Central L.A., but for someone living in the Far westside, that is west of La Brea or La Cienega it is seen as the eastside. But as I always say it is the eastside of the westside, but westside none the less! Lastly, the other day when the City decided to make one lane of traffic on Pico Bl. and Olympic Blvd. one way I noticed that they designated the bounday for the westsdie as being La Brea Av. So I guess bottom line is: it's a matter of perspective. PS: Militant Angeleno thank you for being the spokesperson for us Native Angelenos.

Robert90033:
I for one, being from Boyle Heights and having grown up in the eastside see everything west of Downtown L.A. as the westside.

That was the Militant's favorite part :)

PS: Militant Angeleno thank you for being the spokesperson for us Native Angelenos.

De nada, but the Militant would prefer it if more of us natives had a voice in this city so it's not just one Militant trying to speak up...

Believe it or not there used to be a river going from Silverlake to the Santa Monica bay. The Ballona Creek is visible but parts like Brookside is hidden.

With this preface some of the streets that go along the old river bed are From Hoover(sorry couldn't figure out Gmap link) along 11th Street, around Gramercy to go to Country Club ending near Los Angeles High School. There the brookside river from the North joins up and goes towards La Cienega and Exposition Where the hidden river magically appears.