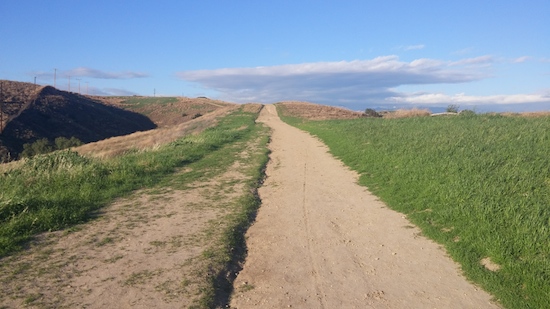 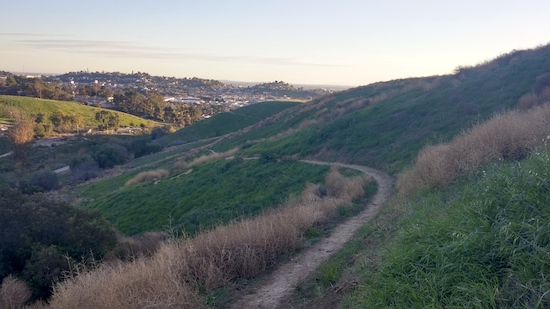 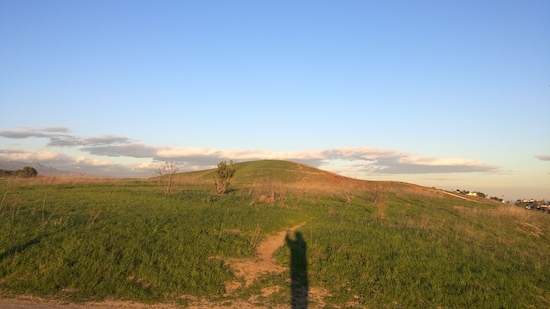 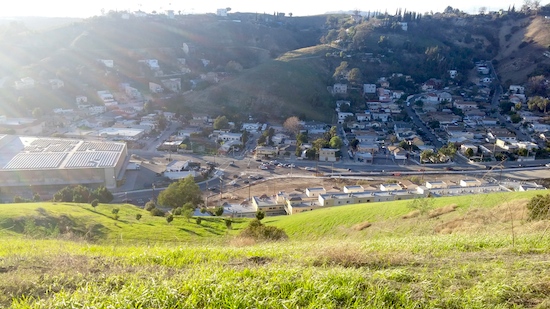 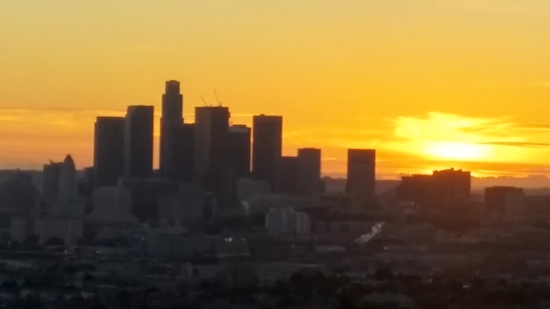 Do make a chance to get here before Springtime ends; the hills are nice and green and native wildfllowers are known to grow here!
Commandeered by Militant Angeleno @ 7:07 PM 2 comments:

It's Always Sunny in El Sereno*

It was a lovely, post-rain windy day, the day that begs for photographs to be taken, and The Militant decided to crawl out of his compound, because he withers and wilts if he hasn't gotten enough sunshine. He decided to head to The Eastside because, believe it or not, he needed to make some new additions to his now-legendary Pacific Electric Archaeology Map (Note: The planned "Pacific Electric Week" of articles that was originally planned to accompany the map's debut last November has been postponed to an unspecified date due to additional Militant research...Stay Tuned!). Last month, a reader named "AJ" left a comment about some remnant track adjacent to Soto Street along the former Monrovia-Glendora main line, and today was the perfect break in El Niño business to go check it out.

The Militant headed down Mission Road to where it converged with Soto Street and Huntington Drive. He walked down that half-rural, half-industrial stretch of north Soto Street to bask in the sunshine, with the seasonably green (Yes, we do have seasons in Los Angeles, get with it) Ascot Hills to the east and the sprawling, solar-powered Forever 21 headquarters (which was once a large inventory warehouse for The Broadway back in The Militant's Lil'Mil days) on the west. After a fair distance, he entered the driveway of a satellite USC Health Sciences Campus facility and in the parking lot, saw the embedded remnants of the Pacific Electric Monrovia-Glendora Line double tracks, right there in the concrete, as if to preserve it for posterity (or for Militancy), or even as a Sid Graumanesque concrete monument for transit history tourists.

The Militant took a moment to not only take a few snaps from his Militant Communications Device, but also touched one of the rails with his hands. Once he did that, he suddenly had a vision...he saw the Los Angeles of a long time ago, with the sight of large, red streetcars, rolling with the sound of thunder, and then he saw a Red Car pull away as a small child was crying, and then there was a rainstorm, and then he saw Kylo Ren standing with the Knights of Ren looking all bad-ass, and then the voice of Obi-Wan Kenobi echoing from the outer realms of The Force saying, "Rey! Rey! These are your first ste..."

Oh wait, The Militant got that mixed up with something else.

He then continued to walk towards the USC facility to the end of the property where he saw the Valley Blvd PE Bridge from deck level, devoid of tracks but still covered with ballast stones. Again, The Militant felt a connection to the past. The Force of Pacific Electric history has definitely Awakened (Keep the puns going, Militant).

The Militant enjoyed his walk in the sun, heading back north again, but to his chagrin, the Mission Road Viaduct, which was still standing the last time The Militant was around these here parts, is no more. Incidentally, on the same week where the 6th Street Viaduct is slated to finally commence its demise, The Militant has encountered the completed demise of this Viaduct, also in Los Angeles City Councilman Jose "Tha Bridgekillah" Huizar's 14th district.

R.I.P. Mission Road Viaduct. But do notice the stark contrast in color of the Ascot Hills in the background. The Militant can't stress this enough. YES, WE HAVE SEASONS IN LOS ANGELES.

The Militant was glad to take numerous pictures of both bridges and say his final goodbyes. This is why The Militant does what he does. May The Force of Los Angeles History Be With You (Okay, Militant, a bit predictable for an ending here, but acceptable).

*Technically, the track remnants, the USC building and the Forever 21 factory are on the west side of Soto Street and therefore would be in Lincoln Heights, and yes, The Militant is aware of this, but he spent most of the day in El Sereno, and the El Sereno side is what appears in the photographs. But don't you worry Lincoln Heightsiders, The Militant will cover your hood in due time.
Commandeered by Militant Angeleno @ 7:05 PM No comments: