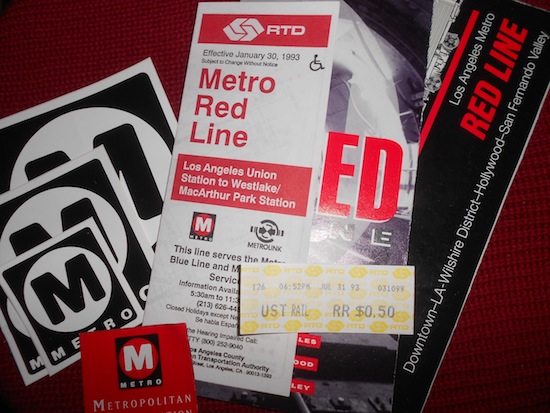 1. You must have ridden the Metro Red Line at least once within the past 20 years (If you still haven't, there is no hope for you).

2. Send an email to militantangeleno@gmail.com with the following:
- Your Name
- City or Los Angeles neighborhood you live in
- A short, one-paragraph story, anecdote or interesting occurrence that happened to you while riding The Red Line.

3. One winner may or may not be chosen at random. Or maybe you have the most interesting story. The Militant hasn't quite decided yet.

The Militant will announce the winner on Monday, February 4 on the MA Blog. He may or may not also publish some of the more interesting stories!

January 1993: Elvis appeared on a postage stamp, America inaugurated Bill Clinton as its 42nd president, teens and young adults used pagers to communicate, Michael Jackson performed at Super Bowl XXVII, held at The Rose Bowl. Speaking of the NFL, the Los Angeles Raiders and Rams didn't seem like they were going to go anywhere (both literally and figuratively), Whitney Houston's "I Will Always Love You" was the #1 song and a city long-chided for not having a subway system opened the first 4.4 miles of it to a curious, naive and skeptical public.

January 2013: Michael Jackson, Whitney Houston, pagers and Los Angeles' NFL teams are no longer with us. People can print their own postage stamps on their computers. We have an African American sitting in the Oval Office now, starting his second term (Bill Clinton refuses to be irrelevant, though). And the Little Subway That Could now stretches 17 miles to Koreatown, Hollywood and North Hollywood, connects with four other rapid transit lines, runs 24 hours on New Year's Eve, stays open to 2 a.m. on Fridays and Saturdays and last month logged in a record high 158,830 daily average ridership.

Yes, our Metro Red Line subway turns 20 years old today (Which means anyone who does the "L.A. has a subway?" thing now truly deserves an ass-kicking).

Unfortunately, unlike The Militant's 20-year-old vintage video of the Blue Line's opening he posted in 2010, the video he shot for the Red Line's Opening Day wasn't nearly as ceremonious. Just a bunch of people waiting in line and a few trains passing by. There was a VIP ribbon-cutting event the previous day, and a smaller ceremony that day, with free rides the rest of the weekend.

For those of you who were still in diapers back in '93 (or worse, still in the East Coast/Midwest, etc), The Militant will give you a glimpse of how things were back then. The Red Line only had five stations -- Union Station, Civic Center, Pershing Square, 7th Street/Metro Center and Westlake/Mac Arthur Park. That was it. 4.4 miles.  The ride lasted all but seven minutes. It was only used by the folks Downtown, and that really meant the people that worked Downtown. No one really lived there yet. There were no bars and restaurants and ArtWalks. Could you imagine that?


To make up for the 7-minute subterranean adventure, the RTD (Southern California Rapid Transit District, to you youngins/newbies, as Metro was known at the time) set the fare to all but 25 cents. You can connect to the Metro Blue Line, which was just a couple years old, and Metrolink, which was just a couple months old, and had only three lines going to Moorpark, Santa Clarita and Pomona, respectively.

The trippiest thing about the Red Line back then was its schedule: 5 a.m. to 7 p.m.  Ya rly. 7 p.m. Like The Militant said, there wasn't really a DTLA back then.

Compared to today's timetable, it really wasn't much! Hopping on board a train (they were clean and shiny back then) at Union Station, you emerged at Mac Arthur Park 7 minutes later to a dredged-up lake across the street. Crews were busy at work building the second segment which would open up in 1996, adding the Wilshire/Vermont, Wilshire/Normandie and Wilshire/Western stations to the line (there was no Purple Line then, and incidentally the Wilshire corridor segment -- which was to be re-reouted along Olympic en route to the Westside thanks to certain politicians, was originally going to be named the "Metro Orange Line"). The 25-cent one-way fare remained in effect until the second segment opened.

How did people react? The Los Angeles Times  wrote articles about how riding in a subway was a strange new paradigm. Many people were leery of being in the tunnels during an earthquake (despite undamaged subways in other earthquake-prone cities like San Francisco, Mexico City and Tokyo) and others thought the whole thing was a $1.4 billion boondoggle and would never go anywhere.

But like the great El DeBarge once said, Time will reveal. A year later, the Northridge Earthquake caused only miniscule cosmetic damage and no structural harm. Within a few months, thousands of Downtown workers suddenly discovered that they were just 25 cents and a couple minutes away from the best pastrami in town, and injected new life into a once-floundering Westlake delicatessen, right across the street from the subway's western terminus. In 1994, The Red Line got its silver screen debut playing a supporting role to Keanu Reeves and Sandra Bullock in the transit porno flick Speed. After the Wilshire segment opened in '96, The Red Line got its real Hollywood premiere in the summer of 1999 with five new stations along Vermont Avenue and Hollywood Boulevard. And a year after that, the subway as designed was finally completed, speeding underneath the Santa Monica Mountains and reaching North Hollywood. People voted for more rail and more subways. Some politicians boasted having a Subway To The Sea as other electeds undid the Wilshire tunneling ban. Park N Ride lots in the Valley became full. The only haters were Libertarians and those yellow-shirted folks who blindly spout their "rail is racist" tirades. But subways are here to stay, yo.

Come 2023, our subway will be 30 years old - and will (hopefully) reach the Westside. Our first subway, the 1-mile trolley bypass tunnel built for the Pacific Electric, itself lasted 30 years. But this time it's for keeps.


Commandeered by Militant Angeleno @ 1:34 AM 3 comments:

Where did you spend your last moments of 2012? At a house party? At a bar? Freezing your ass off on Colorado Boulevard?

The Militant was all set to have a festive New Year's Eve in Downtown Los Angeles last night. After all, there were a plethora of NYE activities in DTLA. He set out at 9 p.m. to take advantage of the free Metro fares until 2 a.m.. Then, he went out to Angels Flight for a couple of one-cent rides for its 111th Birthday, and ended up as the last rider of the year (for two out of the last three years!).

He then walked due north along Hill Street to Grand Park. As you may or may not know, it opened last Summer to much fanfare and soon became a popular gathering spot for CicLAvias, concerts and even election night observing.

So surely they'd have a big New Year's Eve celebration where Angelenos can finally count down the last seconds of the year. Right? RIGHT?

He first thought it was just a classic case of Angelenos showing up late. But as it turned into 11 p.m., he started to get worried. Shouldn't there be like a program or something? Maybe it was a poorly-publicized event. But even then there would be a few people hanging around....there was nada.

Maybe it was a smaller event at another part of the park! He walked due west and went to the court of flags plaza thingy. Maybe they were all there!

Okay, maybe it was by the Arthur J. Will Memorial Fountain. Like the fountain would turn all sorts of funky colors at the stroke of midnight and it would shoot out silly string or marshmallows or free tamales or something...


Damn. Whatup with that?!

It was like 11:30 already and The Militant walked over to the bar by The Alexandria Hotel, where he got frisked and was treated to some really awful douchey rap songs from 2005-2008. At the stroke of midnight we were forced to watch a 3-hour old broadcast of an illuminated ball drop some 3,000 miles away. Whoop, whoop.

Okay, folks. Every New Year's Eve we get the same old thing. Time Square Tape Delay, or if we're online, we get shown a slideshow of various cities around the world ushering in the new year, which usually involves an assload of pyrotechnics shooting out from some of its most famous landmarks (Hmmm...imagine if the Hollywood Sign did that. Hey, why the big frown Mr. LAFD Fire Chief?).

So here's the deal. Grand Park Peoples, County Supes and Erryone In Between: In 364 days, please give us Angelenos a public New Year's Eve celebration we so long deserve. And make some fireworks shoot out of City Hall (That...would...be...Bad...Ass). Okay, okay, scratch the City Hall fireworks, we all know the City won't have the budget for that. But give us something on 12/31/13.

If not, The Militant will have his OWN New Year's Eve celebration at Grand Park, AND YOU'RE ALL INVITED!