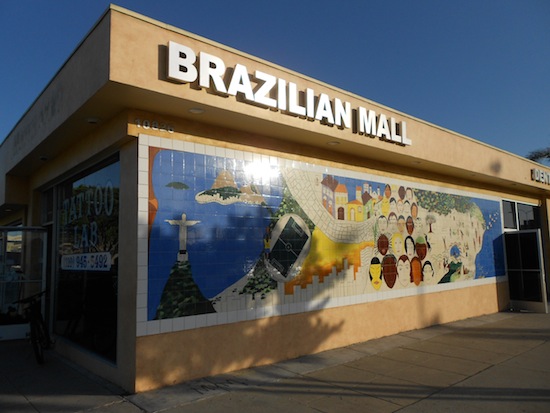 The Militant was riding the Metro Rapid on Venice Boulevard around the Palms/Culver City area not too long ago when he happened upon a single-story building on the southwest corner of Venice and Westwood boulevards that called itself the "Brazilian Mall." The Militant instantly did a "O_o" face and vowed to return for a Militant mission to see more.

The Portuguese-speaking Brazilian community (many of them consider themselves "expatriates" rather than "immigrants') in Los Angeles may be an asterisk within our local Latin American demographic, but there's a healthy community of them who have called the Palms/Culver City area for some 30-40 years, with restaurants, markets and other Brazilian-owned shops along the Venice Blvd corridor between Sepulveda Blvd and Motor Ave. 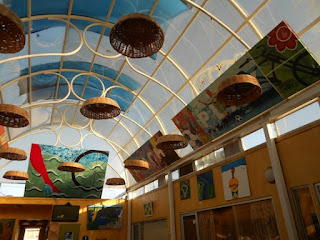 This Brazilian Mall has actually been around for some 20 or so years. The building, home to some half-dozen businesses, is topped by a skylighted atrium structure, where dining tables are set up underneath, for a Brazilian pizza restaurant which has only been around since 2010. It is a 'mall' in the true sense, as all of the other businesses also have entryways from the atrium.

Admittedly not as familiar with Brazilian culture as he is with others, he wanted a quick, inexpensive taste of South America's largest country, so he checked out Supermercado Brasil. 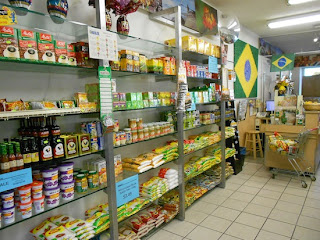 Typical of our local ethnic markets, this one also features nearly everything for the homesick, including snack foods, beverages, cooking ingredients (the brands Yoki and Soya are well-represented here), and even CDs/DVDs, flags, t-shirts and (this being Brazil of course), bikinis.

Although, it doesn't matter what country an ethnic market represents, you will always find Italian panettone for sale. Is The Militant right?

Having not too much money in his pocket, he was still able to get a little taste of Brazil. He got a bag of plantain chips, a bottle of maracuya juice (Though he learned "maracuya" is just a fancy Portuguese way of saying "passionfruit") and a bag of Batata Palha, or potato sticks, which is considered a side dish rather than a snack food in Brazil.

The woman who was in line before him pointed to a fancy dish of bonbon-like confectionaries under a glass, and asked for a few which were placed in a plastic bag. The Militant was naturally curious and asked about them. 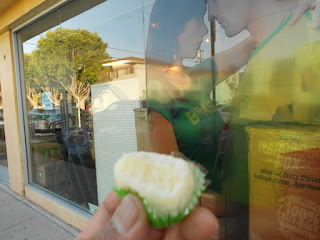 He was told they were Brazilian hand-made candies, made either out of chocolate (brigadieros) or coconut (beijinhos), each for $1.50.

He got a beijinho (pictured left), which was chewy and sweet, with the taste of coconut, sugar and condensed milk. Apparently they are made for birthday parties in Brazil.

For more of that Brazilian flavor, you can check out some of local restaurants in Lil' Brazil on Venice, such as Cafe Brasil or Kikafulô (formerly Zabumba) -- both within walking distance of the Brazilian Mall.

Also, don't forget to check out the Brazilian Day festival later this Summer on Saturday, September 7 at Hancock Park, right by the La Brea Tar Pits. 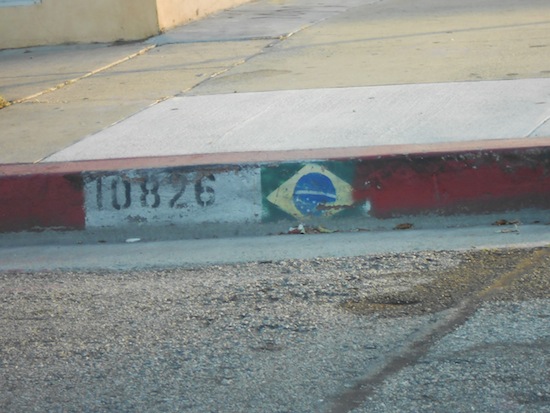 Bobble On and On 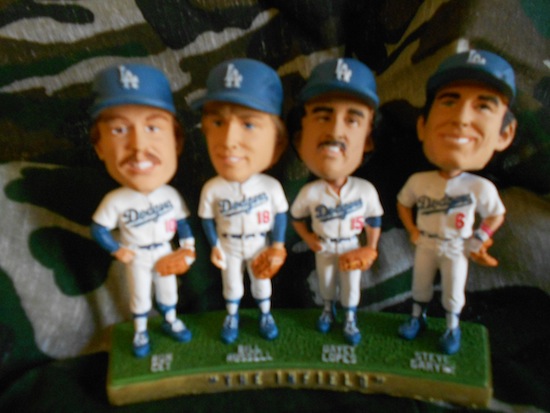 It was a nice day and excuse to go to a ballgame, the Militant's second since Opening Day and his first in the Post-McC*urt Era on Tuesday night.

Of course, the other 51,000 people were here to get themselves one of them free bobble heads, featuring the classic Dodger Big Blue Wrecking Crew infield of 1973-1981.

It was also a day to the a return of Beast Mode to The Stadium, fresh off his recovery from the Disabled List: 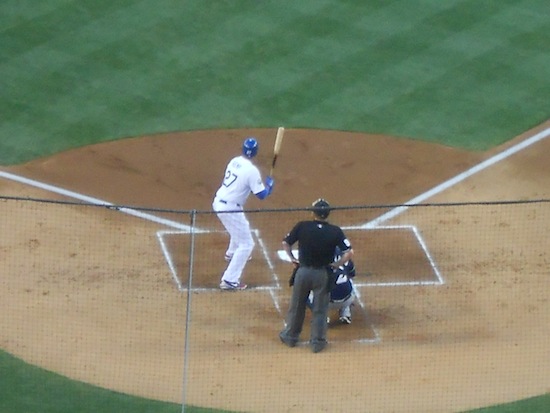 Despite a 9th-inning double that seemed to spark a rally, the Boys In Blue lost to The Brew Crew 2-1. But The Militant had his first Magic spotting at The Stadium:

North Atwater Park: Up Close and Personal with the Los Angeles River 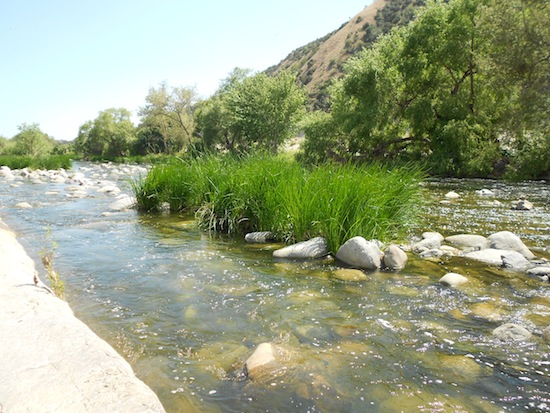 Oh, it's been one of those blog lapses again.

It was an ordinary Saturday...The Militant was dropping off some E-Waste at a local Los Angeles City S.A.F.E. disposal center when he ventured around the area out of his own militant curiosity. He found himself on Chevy Chase Drive in Atwater Village and the voices inside his head his militant instinct told him to venture forward, to the road's end. It was there where he saw it: North Atwater Park.

There was a small parking lot along with a bicycle parking rack, so he knew he was in the right place. Any beyond the lot was an open area with picnic tables, benches, a clay dirt path and various California native plants. But beyond that...

It was the Los Angeles River, flowing, running wild and pure. Yes, he had encountered The River before. But this time, there were no fences or railing to encumber him.

This is what nearby Griffith Park, just yards away, past The River and the the 5 Freeway, was meant to be like over 60 years ago. A peaceful parkland that welcomed one to the Los Angeles River, interrupted due to the aforementioned freeway. All but realized until recently. 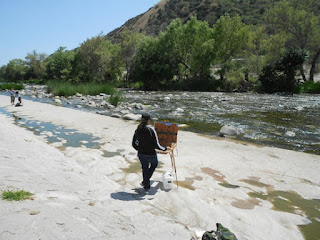 On this day, there were several people painting along the banks of the river. No, not taggers or graff artists wielding spray paint cans, but people holding brushes, painting on canvases set up in locations to their liking (pictured left).

According to one of them, they were all enrolled in Barnsdall Art Park's 3-hour Plein Air painting class, where they were assigned this week to show up at North Atwater Park and paint their subjects along the riverside.

The Militant was in awe. He could hear the river water rush just inches away from him. He walked further south along The River's east bank, passing by some people chatting, one of them greeting The Militant, and an Australian Shepherd dog who seemed to take a liking to him. He saw ducks walking in the standing water along the concrete riverbed, watching them march hurriedly towards the water as The Militant approached.

It was the perfect scene that was marred only by the sound and occasional sight of cars whooshing by on the 5 Freeway on the other side of The River. If not for that, The Militant would probably never leave (which may or may not be problematic, as he couldn't blog again if he did). 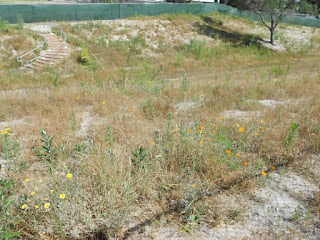 Next to the native plants area was a large dry ravine, with native wildflowers, which ran diagonally towards The River (pictured right). It's gated off by temporary fencing, but there are stairs leading down to it, so it might be accessible in the future. The purpose of the ravine, according to an informational sign, was for a means to allow runoff water from the nearby water treatment plant to cleanse itself naturally by entering the local water aquifer. It seems that sustainable water runoff treatment is the in-thing these days.

This is Memorial Day weekend, and most of you have better things to do than to real local blogs (unless you're looking for something to do). If you're like The Militant and don't get leave town (or at least never publicly admit to doing so), he recommends spending a few hours chilling here by The River at North Atwater Park. It's free to visit, after all. Our river is a link to both our past and our future. A pedestrian/bicycle/equestrian bridge across The River here will begin construction next year.

Most of all, The Militant found his new Happy Place. You may or may not see The Militant here sometime. But if ever you do, please turn off your cameras/recording devices and raise ya fist!

The Militant, For One, Welcomes Our New Dodger Overlords 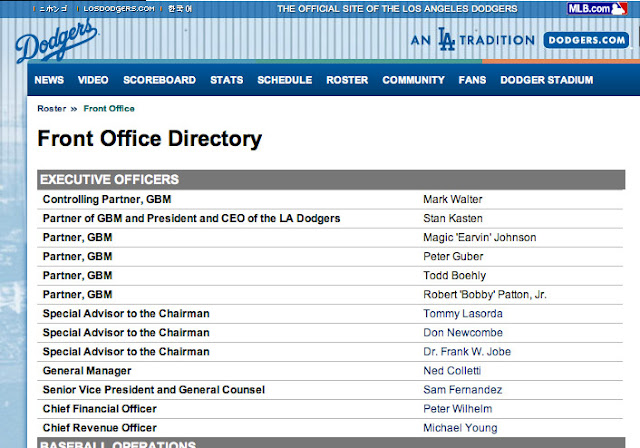 Take a good look at the picture above, grabbed from the official website of the Los Angeles Dodgers. Just like that, the 8-year McCourt Regime has ended and new leadership has taken over today!

Welcome to Los Angeles sports, Guggenheim Baseball Management. Of course, one of them needs no introduction, having been one of the most celebrated athletes and businessmen of our city.

In fact, he may or may not get his own bobblehead soon:


In closing, The Militant would like to sincerely thank Mr. Frank McCourt --Thank him for being the butt of many of the Militant's jokes. Adios, suckaaaaa!
Commandeered by Militant Angeleno @ 6:21 PM 2 comments: