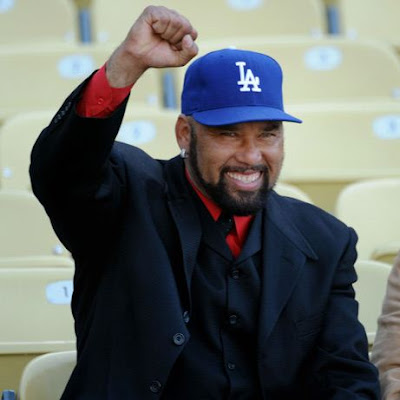 Even though these are chain establishments, the Militant nonetheless welcomes these additions to Union Station, which despite its rail renaissance is still a sorely underused facility. It would certainly prep the terminal for its inevitable role in the long-anticipated California High Speed Rail network. The Militant would love to see, at least in the near future, a weekly farmer's market in the station property's open space and the re-opening of the former Harvey House restaurant space on the southern end of the station - maybe a new location for the local Du-par's coffee shop chain?
Commandeered by Militant Angeleno @ 12:44 AM 1 comment:

On Location: 'Train'-spotting in Echo Park

It's no secret that Los Angeles is one of the most-filmed cities in the world, whether standing in for itself or another city, but oftentimes the Militant will be watching a movie, television show, commercial or music video and go, "The Militant knows where that is!" This is the first of an infrequent series on the Militant Angeleno's blog called "On Location" that pinpoints their filming locations here in town.

The Militant has been hearing some catchy pop tune lately that makes lyrical references to Mr. Mister and Madonna, and just found out it's the song, "Hey, Soul Sister" from the alt-pop band Train - yes, that same Train that gave us "Hey Virginia" and "Drops of Jupiter" that became daily fodder on the old incarnation of Star 98.7.

Anyway, the music video for that song (window plays above) features a recognizable locale for the Militant; a little, way-off hipstermagnet corner of Echo Park embedded in the hills a half-mile north of Sunset, right at the corner of Echo Park Avenue and Delta Street. The cafe the band is playing in front of is none other than Chango Coffee.

Of course, they're not the first "Train" to show up in that part of town; the old Pacific Electric Echo Park Avenue Line ran there until 1950.
Commandeered by Militant Angeleno @ 11:28 PM 3 comments: 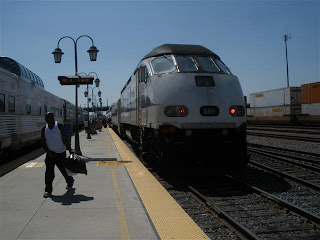 This year, the Union Station goings-on was nearly identical, so the Militant decided to take it a step further and visit the National Train Day events in San Bernardino. And not only that, but to take in the full meaning of the day and travel strictly by train the entire day - steel wheels for real - making a 120-mile round trip journey entirely rail.

He started, of course with a quick dash on the (M) Red Line to Union Station, sampling the festivities there and hopping on the (very crowded) 11:50 a.m. train to San Berdoo via Metrolink. It was then when the Militant realized this was his first Metrolink journey in a loooong-ass time; the last he remembered riding it was sometime in 2003.

The ride to San Berdoo was mush as he remembered it, yet it had been so long that it almost seemed entirely new to him: zipping past cars on the 10 east; flying through El Monte, wondering why the El Monte Busway station and the El Monte Metrolink station are not one in the same; rolling past single-story suburban backyards, rugged industrial areas and being dwarfed by the peaks of the San Gabriels; and passing by exotically unfamiliar sights like the ginormous Auto Club (California) Speedway in Fontana. 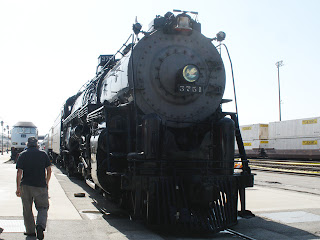 After an hour and a half, the Militant finally arrived in San Bernardino's depot, itself a historic train station even outdating Union Station by 21 years (built 1918). There he saw a historic Santa Fe steam locomotive (which the Militant got to climb into), with several restored passenger cars coupled behind it. The San Bernardino Station even has its own transportation museum, and for the day there was also a rail/transportation-related outdoor bazaar, selling model trains, railroad souvenirs, model trucks and t-shirts. And unlike Los Angeles Union Station, there was an active freight transfer facility on the other side of the tracks, with freight trains making an occasional show for the NTD crowd. 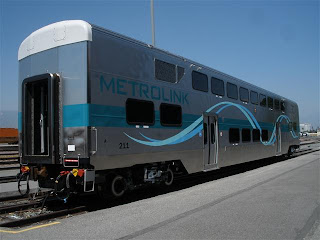 Also, one of the newly-unveiled Metrolink crash-resistant railcars was on display here, along with a modern BNSF locomotive.

The Militant returned back to Union Station on the 4:10 p.m. train, looked around for a bit, and then hopped back on the Red Line to return to his compound.

For the thousands of Metrolink riders who take the train to or from work, it's just another way of commuting to take for granted. But not having the opportunity to ride the 'Link as often put things into a different perspective for him: The Militant took to the rails on Saturday, not just because he wanted to, but because he could.
Commandeered by Militant Angeleno @ 11:07 PM 1 comment:

While folks are celebrating Mexican St. Patrick's Day today, Metrolink is doing a little celebrating of its own, unveiling the first two of their cab control cars built in response to the September 12, 2008 tragic collision between a Metrolink train and a Union Pacific freight train in Chatsworth. Twenty-five people lost their lives and 135 were injured in the worst commuter rail accident in American history.

So today in Colton, Metrolink officials revealed their new cars, meant to ride on the opposite end of the train as the locomotive, to provide a means to control the train when it's traveling with the locomotive on the tail end. In other words, while the train appears like it's going "backwards," there is an engineer on the last car of the train controlling it, which is what happened on that tragic day on 9/12/08. The new cars, built by Hyundai Rotem of South Korea, are engineered with a "crumple zone" that maximizes structural integrity in the event of a collision while minimizing casualties. And on top of that they come with a new teal-and-silver look for the commuter rail agency, which replaces the now-unfortunate-looking logo introduced nearly 20 years ago, a brand that was designed by an Art Center College of Design student.

Check out the video above, produced by the Orange Country Transportation Authority.
Commandeered by Militant Angeleno @ 6:33 PM No comments: