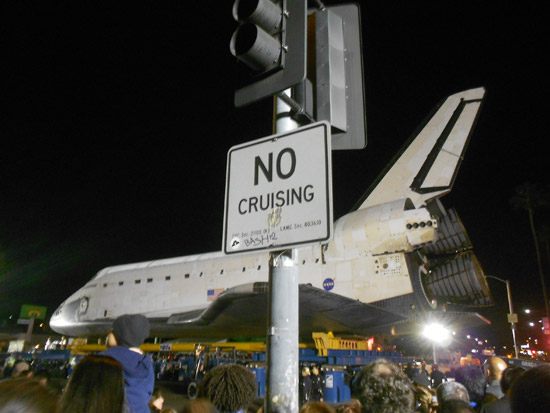 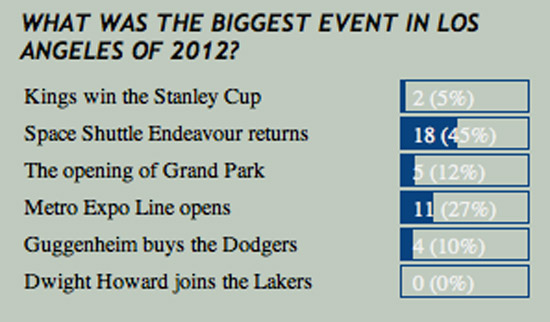 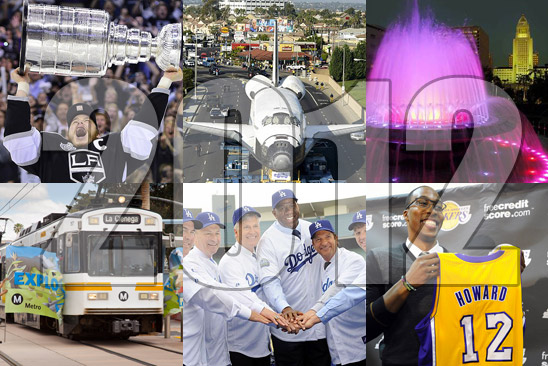 Yep, it's that time of the year when we wrap up those times of the year that made this year. Los Angeles had a pretty interesting year, to say the least. Here are some big stories that may or may not have made Twenty-Twelve the year that was:

Kings win the Stanley Cup
It took the Dodgers two years to win a title since arriving in Los Angeles. The Sparks, six. The Galaxy, seven. The Lakers, 12. But the Los Angeles Kings? 45 years of frustration, until this year, when they beat the New Jersey Devils in June to win their very first Stanley Cup. Kings fans, who are the most diehard in all of Los Angeles sportsdom, celebrated joyfully and responsibly. Look ma, no riot! From Disneyland to Dodger Stadium they proudly and rightfully showed off The Cup across the Southland. And with the 2012-2013 NHL season still being in limbo due to the lockout, it looks like we might get to hold on to the Stanley Cup a little bit longer...

Space Shuttle Endeavour returns
The most photographed subject in all of Los Angeles this year was not a celebrity nor a sunset, but the Space Shuttle Endeavour, decommissioned by NASA and making a triumphant return to its Southern California birthplace this past Fall. I wasn't just one event, but three: The playful flight of the shuttle atop a NASA 747 got nearly every one of us looking skyward on September 21; in mid-October, the impromptu parade through Westchester, Inglewood and South Los Angeles drew a million people in simultaneous displays of patriotism, scientific achievement and local pride. And in late October, the shuttle finally went on display at its new home at the California ScienCenter. In a year that saw the loss of the USC-educated Neil Armstrong and San Fernando Valley native Sally Ride,  the shuttle seemingly passed their pioneering astronaut spirit on to all Angelenos.

The opening of Grand Park
Los Angeles finally has its own town square in the opening of Grand Park, which stretches from Los Angeles City Hall to the Music Center in DTLA. Opened in two phases in July and October, the park has already been put to good use as a concert venue, a CicLAvia stopover and a place to watch the results of this year's presidential election. Gee, could we have like a New Year's Eve countdown celebration there sometime?

The Metro Expo Line opens
Rail transit finally reached the Westside for the first time in 60-something years as the newest branch of Metro's rail network had a new set of commuters "Going Metro" for the first time. Kings, Lakers, Clippers, Trojans and concert fans have already seen the wonders of Expo. And the story isn't over yet: By 2016, the Expo Line will become "The Trolley To The Sea" when it finally reaches Santa Monica.

Guggenheim buys the Dodgers
The long nightmare that was the Frank and Jamie McCourt era finally ended this year when Magic Johnson and some of his wealthy friends in the form of Guggenheim Baseball Management got together and made their 2-billion bid to purchase the Los Angeles Dodgers. The organization wasted no time in flexing its financial muscle, doing things like lowering the stadium parking fee to $10, resurrecting the Cool-A-Coo and making some high-profile mid-season acquisitions on the roster. If only the team's physical muscle were as strong...But hey, at least no more McCourt!

Dwight Howard joins the Lakers
Lakers diehards have talked about getting him for a while, and this year we finally landed Superman Iron Man. And okay, so he hasn't really done much this season aside from being a glorified (and expensive) cheerleader for the Purple & Gold, but he will be the face of the franchise following Kobe's inevitable retirement.

You as a reader of The Militant's blog has the opportunity to vote on which one of these was the Los Angeles event of 2012. Just select it on the upper right side of This Here Blog and vote! Polls are open from now until 11:59 p.m., Sunday, December 30, 2012 (That's New Year's Eve Eve!).

The Militant may or may not have missed some other important events this year...if you think there were some more he should have added to the list, feel free to list them in the comments!
Commandeered by Militant Angeleno @ 4:40 PM No comments: