Everyone knows Los Angeles is home of some of the most famous people alive, but it's also home to the most famous people in the afterlife! For the past few years on this date, The Militant has made it a tradition to pay his respects to some famous (and infamous) Angelenos who make this City their eternal resting place.

Back in 2010, The Militant made a visit to Holy Cross Cemetery in Culver city. Last year, he visited Inglewood Park Cemetery, walking along through dimly-lit mausoleums just to bring you a blog post.

This year, he takes you to Hollywood.

Though it's popularly known as a hipster outdoor movie palace, or a place to see concerts, Hollywood Forever Cemetery, originally Hollywood Memorial Park, is one of Los Angeles' most historic and storied graveyards. It was founded in 1899 by early Angeleno developers Isaac Lankershim and Isaac N. Van Nuys (yes, those guys...Interestingly they were interred at the Eastside's Evergreen Cemetery).

It was then sold to Jules Roth, a known felon and racist, who forbade Gone With The Wind actress Hattie McDaniel from being buried there, as per her wishes. In the 1980s, Roth sold the front lawn properties of the cemetery fronting Santa Monica Blvd to a minimall developer to settle taxes. Local girl and Go-Gos singer Belinda Carlisle once called it "The worst thing to happen to Hollywood." The shady-ass old mofo finally croaked in 1998, prompting the sale of the cemetery to the Missouri-based Cassity Brothers for $375,000, and re-named and re-marketed the memorial park as "Hollywood Forever."

Its proximity not only to Hollywood, but to Paramount Studios helped make it a final production wrap for some of Hollywood's elite, such as filmmaker Cecil B. DeMille, but it's also the resting place of historical Angelenos, most notably Col. Griffith J. Griffith, who donated Griffith Park to the City in 1896. Early Hollywood pioneers Cornelius Cole, Hobart Whitley and Harvey Wilcox are also interred here, as well as Los Angeles Times founder Harrison Gray Otis (a.k.a. The Pointing Guy at MacArthur Park).


There's also long-standing legends that the cemetery may or may not be haunted.  Guess you'll have to find out for yourself...Happy Dia de los Muertos from Hollywood! 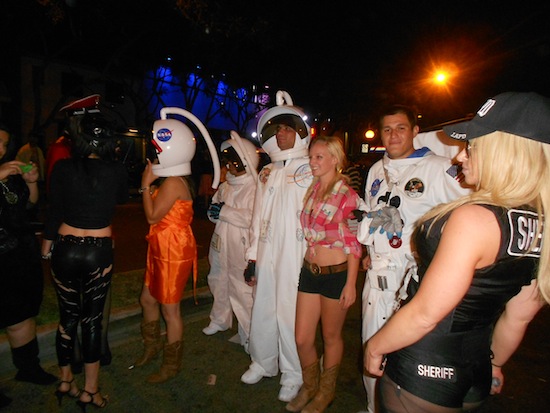