The 2019 CicLAvia Season has come to an end, and the sixth and final (and 34th ever) open streets course runs through the west San Fernando Valley, this time running on an all-new alignment along perhaps the most boring-shaped CicLAvia route evar (Dude, it's literally a straight line running exactly five miles...), and The Militant was thinking of putting down like half a dozen points of interest on this here Epic CicLAvia Tour guide and calling it a day, but nooooo....Like a Transformer, there's always more than meets the eye when it comes to Los Angeles history, and this route is no exception. Most of you know your SFV history: It was largely open agricultural land, in came the Pacific Electric in the 1910s, selling land tracts, and after World War II - KABOOM - a suburb was born.  The result is 14 points of interest on for this Sunday's CicLAvia route, which is expected to be cold chillin', but not rainy (we hope). But always remember, The Sun Always Shines On CicLAvia, and no matter how overcast the day is, El Sol always finds a way to make a cameo appearance. So here we go (better late than never), and as always...See you or not see you on the streets! 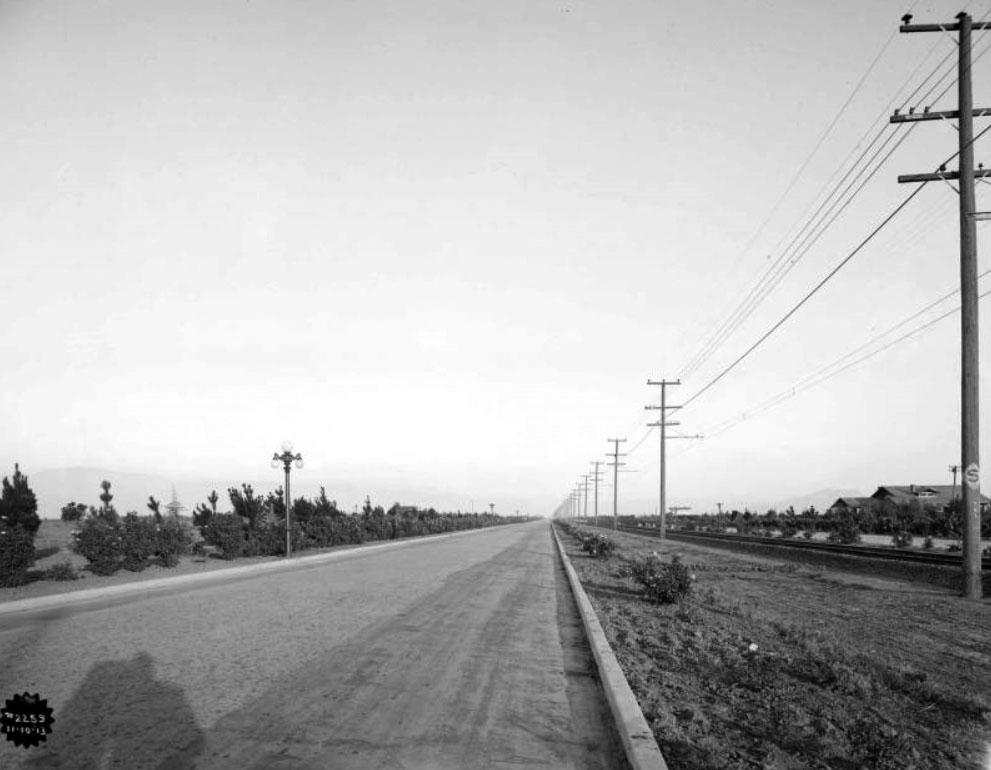 Named after railroad executive Moses Hazeltine Sherman (you should be familiar with that name from the "Meet The Hollywoods" CicLAvia), who was responsible for bringing his Los Angeles & Pacific Railway (later merged into the Pacific Electric Railway) into the San Fernando Valley. The street was originally a zig-zagging $500,000 grand boulevard built in 1911 along the Red Car right-of-way, stretching from North Hollywood, running west along what is now Chandler Blvd, then north along what is now Van Nuys Blvd, and west along the current Sherman Way. As the SFV farmland gave way to (sub)urbanization and the street grid, Sherman Way was re-aligned and extended eastward as a straight thoroughfare in the 1920s. 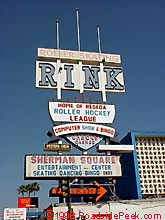 In the 1970s and 1980s, this was The Center of the Universe for many Valley youth: A roller rink during the skating heyday of the '70s (and on Monday nights, the Skataway club, a weekly private hangout for celebrities such as Cher and Jack Nicholson), and also hosted a roller hockey league and a bowling alley. Towards the '90s, the venue hosted computer shows during the weekends, but was also plagued by gang activity. It was razed in 2001 and replaced by the current Walgreen's pharmacy. 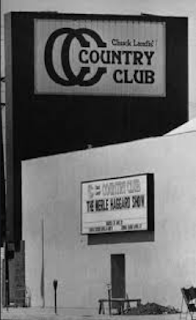 Originally built as a Sav-On Drugs store, Los Angeles nightclub entrepreneur Chuck Landis bought the property in 1979 and converted it to a 1,000-seat concert venue originally intended for country music acts. But the burgeoning local punk, new wave and heavy metal acts of the early 1980s found an ideal venue - artists such as Motley Crue, the Red Hot Chili Peppers, The Bangles, Jackson Browne and Guns N Roses played here in their early years, as well as established acts like B.B. King, The Beach Boys, James Brown, Prince and Tom Petty and the Heartbreakers. U2 played their very first concert in Los Angeles here in 1981. In the mid-'80s, the venue also hosted boxing matches. It petered out in the 1990s and is now the Restauracion Reseda Church. The beginnings of the Sherman Way/Reseda intersection becoming the entertainment capital of Reseda started as far back as the 1940s when this S. Charles Lee (You'll recognize his name as architect of many other historic theatres in these Epic CicLAvia Tour guides)-designed Streamline Moderne cinema showed double features to the nearby newly-developed residential community. The theatre closed in 1988, but it gained some notoriety in the 1997 film "Boogie Nights" and is planned to be resurrected as a Laemmle multiscreen cinema. 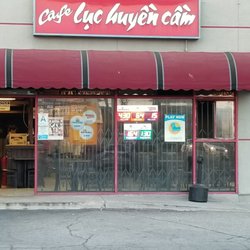 Thought Westminster and Garden Grove are most synonymous with the Vietnamese community in Southern California, the largest concentration Viet Americans in the 818 is located right here in Reseda. This mile-long stretch of Sherman Way is home to several Vietnamese eateries, including Pho 999 (7255 Reseda Blvd), Pho So (7231 Reseda Blvd), Luc Huyen Cam Cafe (18541 Sherman Way), Sandwich Express (18575 Sherman Way), Vinh Loy Tofu and Bun Bo Hue (18625 Sherman Way).
There are also many more businesses, cultural institutions, organizations and houses of worship with a two-mile radius of Sherman and Reseda. 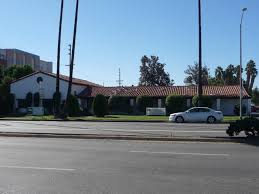 Like many Jewish institutions in Los Angeles, this senior living and health care facility originated in Boyle Heights in 1916, expanding to the SFV in the late 1940s. It's one of three campuses of the Los Angeles Jewish Home - the other nearby on Victory Blvd and another in Playa Vista. This campus, known as the Grancell Village Campus, is home to 1,000 seniors. Wonder if the residents know that the 1952 Spanish Colonial Revival structure on Sherman and Tampa was originally the Lorenzen Mortuary? 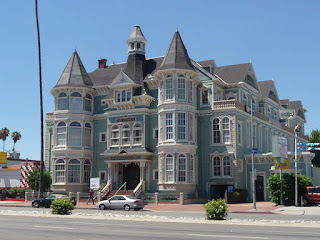 Conceived by carpenter Dennis Platt and designed by T.W. Layman, this office building built in the 1980s (but meant to look like it was made in the 1880s) contains remnants from the Queen Anne-style Little Sisters of the Poor Rest Home originally located in Boyle Heights and various parts from Victorian homes in Bunker Hill, combined with re-created architectural sections. 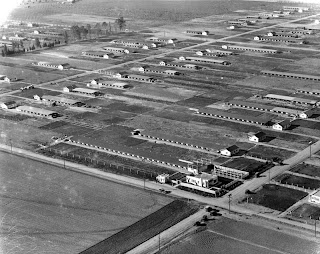 Charles Weeks was a Midwesterner who moved to California in 1904 and in 1916 established a utopian poultry farming community named Runnymead in Santa Clara County where families lived on one-acre farms and sustainably raised chickens and eggs, and through that, would establish ideal social structures. In 1923 he moved south to the farming community of Owensmouth in the San Fernando Valley and established a similar colony here known as the Weeks Poultry Colony. The Great Depression put the idealistic colony to an end, and Weeks moved to Florida where he lived the rest of his life until his death in the 1960s. The colony is long-gone, but Weeks left his mark on the community which still exists today: The area is now known as Winnetka, named by the remaining colony members after Weeks' Illinois hometown, Runnymede Street and park were named after Weeks' original Nor Cal colony, and nearby Independence Avenue originated from his poultry colony marketing pitch, "One Acre and Independence." 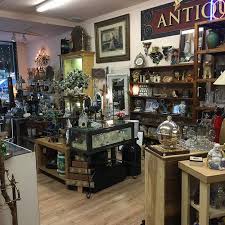 Take a short ride down Owensmouth Avenue to see where The Los Angeles River officially begins, at the confluence of Bell Creek (pictured right), which flows down from the Simi Hills, and Arroyo Calabasas (pictured left), which flows down from the north side of the Santa Monica Mountains. Together they become the Los Angeles River, flowing 51 miles eastward then southward into Long Beach Harbor. 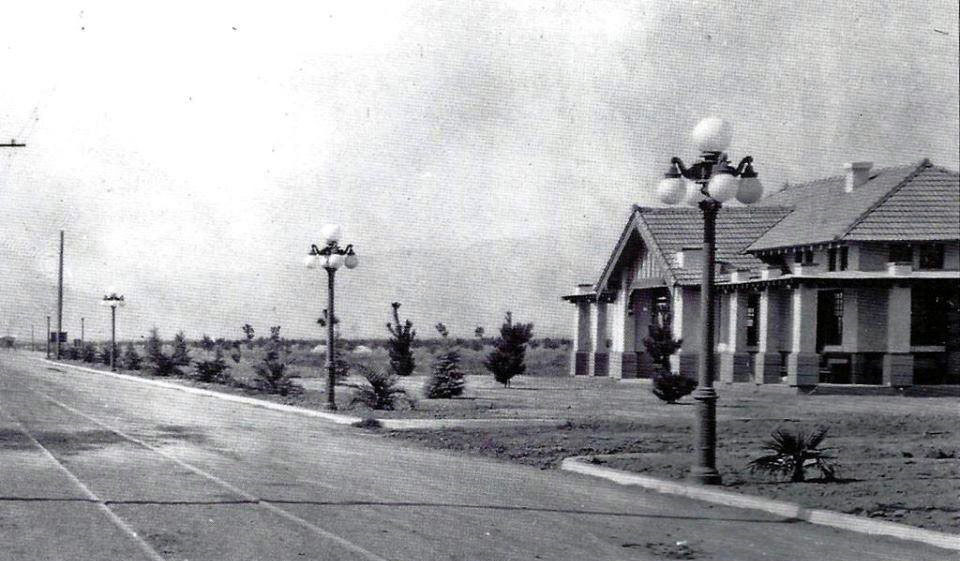 On the northwest corner of this intersection stood the Pacific Electric's Owensmouth (Canoga Park) depot. Built in the days when land companies were promising access to Owens Valley water via the upcoming Los Angeles Aqueduct (despite the fact that its terminus was some 20 miles to the northeast), the area eventually adopted the name of a nearby Southern Pacific Railroad depot, itself named after Canoga, NY. The U.S. Postal Service insisted on adding the word "Park" to lessen confusion with its original East Coast namesake. The Pacific Electric was a Craftsman-style structure that outlived its tenure as a Red Car depot when service ended in 1938. Unfortunately, it burned down in a fire in 1994. 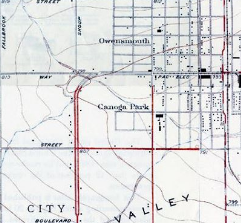 At the southeast corner of Sherman Way and Shoup Avenue is a street called Carlson Circle - a cartographic curiosity that stood out to The Militant. Back in the day, before the SFV conformed to an absolute grid, Sherman Way curved down using this quarter-circular thoroughfare and merged with Shoup Avenue (which, like Sherman Way, was also named after a Pacific Electric Railway executive -- Paul Shoup). The circle also had some connection to the Red Cars: Although there was never track laid on it, it was part of a onetime 1910 proposal to extend the Owensmouth streetcar line to what is now Valley Circle. So who was Carlson? Hugo Carlson was an immigrant from Sweden who settled in Owensmouth in 1912 and was one of the town's pioneers. He owned a 55-acre farm in the area that grew beans and tomatoes, was an active member of the local chamber of commerce and was also instrumental in supporting efforts to build flood control channels in the area. He died in 1958. His old farm, just inside of his eponymous Circle, is now home to the posh Canoga Lakes condo community.

BONUS: And since we've seen some #lasnow on our mountains lately, here's a flashback to 1957 when it snowed in the Canoga Park/Woodland Hills area, just south of Sunday's CicLAvia route. This is Topanga Canyon Blvd at Ventura Blvd: 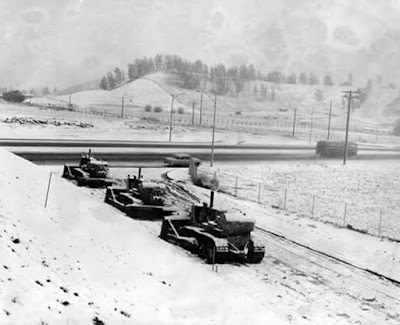 Commandeered by Militant Angeleno @ 1:17 AM No comments: