Attack Of The 50-Year-Old Woman! 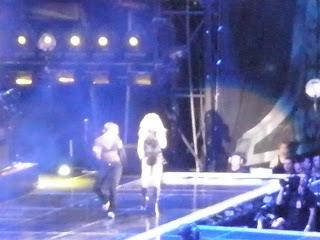 When an unspecified source offered the Militant a free pair of tickets to Madonna's Thursday night concert at The Stadium, the first thing the Militant thought was, "Madonna has a concert at Dodger Stadium?" but the Militant accepted the tickets, despite not being the hugest Madonna fan (though he's not ashamed to admit he has some of her CDs and LPs in his collection). But (and he's dating himself now), he's a child (well, technically, a teenager) of the '80s, and why not see a true '80s icon while they're still performing? So the Miliant texted one of his platonic female operatives and off they went to the Ravine.

The big three American '80s pop music icons - Michael Jackson, Prince and Madonna - are all halfway to 100. Between the three of them, their ages total a sesquicentennial! The Militant saw Prince rock Staples Center four years ago, and after Madonna, it's time to see the fux0red-up King of Pop...if he can guarantee that the tip of his nose won't fly off into the audience.

It's been three weeks since that devastating season-ending loss to the would-be World Champs (eugh...), and the Militant returns to The Stadium. He'd seen a concert there before, and in fact, wrote about the experience on This Here Blog. Again, it's a confusing experience: the familiar aroma of beer, Dodger Dogs and nacho cheese wafts in the air while the crowd is pumped for The Material Girl.

The night began with DJ Paul Oakenfold providing mostly-house music before the show, then a long-ass wait that was accented with the celeb sighting of that dude who used to be a Star 98.7 on-air personality...what's his name...oh yeah, Ryan Seacrest. This sort of stuff is foreign territory for the Militant.

Eventually the soon-to-be former Mrs. Guy Ritchie got on stage and sang some tunes the Militant wasn't familiar with at all. Then came a remixed "Vogue," which he did recognize, interspersed with the familiar and unfamiliar. The singer, who picked up the guitar a few years ago, played nearly half of her set slinging a six-string, looking like the rocker chick that never was, but hey, if anyone's entitled to it, it's Madonna.

The Militant digs going to concerts, but in much more intimate spaces (the Univera, er, Gibson Ampitheatre is as big as he prefers) and with artists more focused on the music. So the big dance productions, and the little segues without the artist onstage (who uses the time to switch wardrobe) was again a paradigm shift for this Militant. The cameos by Justin Timberlake and the 30-second walk-on by Britney Spears were admittedly slightly interesting, of course the crowd of 50,000 went totally nuts. For the Militant, the highlight was the hard-rock version of her 1984 hit "Borderline," with Ms. Ciccone again on guitar.

Given what it was, it was a pretty cool show after all. He give props to Madonna for being a music artist who constantly reinvents herself (and even lampoons her former images in one of her numbers via live costumed "wannabees"), and despite the $20 event parking price (hey, no shuttle and she didn't have her bike on her that night), the show was the right price.
Commandeered by Militant Angeleno @ 11:14 AM

80's Madonna is the best, I really don't like her new stuff nor really keep up with it, she is getting quite old but if she still wants to do her thing that's cool. As for 20 doller parking yikes! you should of parked along side Elysian park aross from Police Academey the walk is not bad, unless your girl was wearing heels :)

Well remember back in the '80s when Tina Turner was pushing 50? She's gonna be 70 next year and apparently is still rockin'. Granted, even at the same age Madonna couldn't hold a candle to Tina, but it's still worth it to see an icon perform just for the sake od saying that you did.

Yes, the Stadium charges $20 for non-baseball events. Oh well, the Militant's platonic female operative was nice enough to cover it. :)