All Seoul'd Out: The 37th Los Angeles Korean Festival 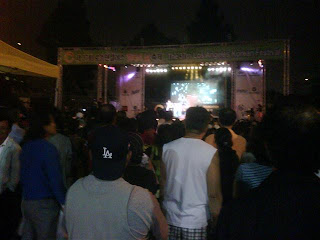 The Militant passes through the Olympic/Normandie intersection at least once a week and has been hearing of the big 37th Los Angeles Korean Festival for the past few days. The epic, four-day-long cultural extravaganza from this past Thursday to Sunday from 10 a.m. to 10 p.m. sounded like something not to miss.

But a busy weekend with tons of unspecified extramilitant activities caused the Militant to miss the free concert by the insanely popular K-pop group The Wonder Girls on Friday night (not surprisingly, the most-attended night of the festival) or the Bibimbap Fest on Saturday (free bibimbap to the first 1,000 attendees!). Dang!

But the Militant was able to check it out on Sunday night. Expecting the show to be over and lots of booths already packing up, the Militant's expectation was totally wrong. Having arrived at around 7 p.m., the festival was still very much alive!

Perhaps it was perfect timing and true (non-hipster) irony. On the very day the Dodgers formally ended their dream of defending their NL West title for the third straight year, the Militant arrived at this festival, situated over the diamond at the Dodgers-built Dream Field at Seoul International Park, located right across the street from the Korean Pavilion Garden (covered in This Here Blog a couple of years ago).

Of course, this event was a pleasant contrast to the disappointing Dodger season (Deport McCourt!). The festival had much action, joy and...Seoul.

But this one was different. You actually felt like you were in another country, and that's not a knock on the festival at all. In fact, that's what made it totally awesome. 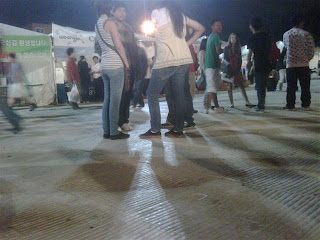 First off, the Militant, in all his terdysumthin years existing in this great City, had never attended a festival that was situated upon thousands of white plastic panels (pictured right). No, really -- the panels were obviously put in place to minimize dust and protect the park's (and the aforementioned baseball field's) surface, but the look and feel of it all made the experience slightly other-worldy. Seriously, when was the last time you attended an outdoor festival on top of thousands of plastic floor panels? 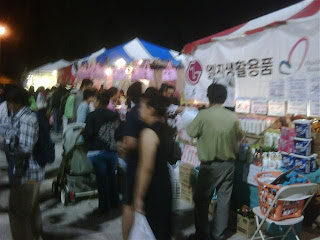 Next was the fantastic night bazaar that took place on most of the festival grounds. Booths hawked everything from therapeutic footrests to ginseng to t-shirts to cellphone accessories to DVDs to cosmetics. People in product stalls hawking their products repeatedly via bullhorns, microphones or at the top of their voices in rhythmic, repetitive cadences, mostly in Korean, but sometimes in the Korean-English-Spanish linguistic triumvirate of K-Town. Accompanied by the cool air, you didn't have to try too hard to imagine that you were in the Land of the Morning Calm.

And the food? Of course, this is Koreatown, and like the Militant always says, You can't spell "Koreatown" without the word "eat." Korean BBQ? There's plenty of that on Olympic, Western and other streets. Outdoor festivals don't have the infrastructure (nor adequate ventilation) for that, but there's tons more K-food to shake a (stainless steel chop-) stick at. 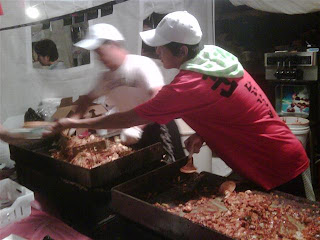 With so much grub and so little time (not to mention stomach capacity), the Militant went for the Choonchun Dakgalbi booth (pictured right), where he had a nicely-stacked $5 trayful of chicken galbi mixed with cabbage, sweet potato, red sauce and cheese.

The Militant wanted more but was short on cash. No prob! Most of the food booths gave away free samples! Everything from Korean-style popcorn chicken to blood sausage to pajeon seafood pancakes. Still hungry? Just come back later, grab a toothpick and sample away! 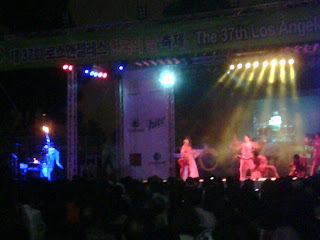 The night - and the four-day-long festival - concluded with a pretty kick-ass awesome performance by the Tal Taekwondo troupe (pictured left) - which combined the iconic Korean martial art with traditional dance, drumming, acrobatics, b-boy hip-hop moves and Cirque du Soleil-style theatrics. The performance featured some sort of storyline depicting a Crips vs. Bloods-type Korean folkloric battle. Or at least there were these people dressed in blue pitted against people dressed in red...

Even the ever-native Militant admits that the 37th annual Los Angeles Korean Festival was his first, and wonders why he slept on the past 36 fests. but Los Angeles is always like that. The things you take for granted and don't consider much one moment will smack you upside the head and blow you away the next. The Militant will definitely be back for the 38th.
Commandeered by Militant Angeleno @ 10:51 PM

Koreatown and the Latino/Asian community that calls it home is the most exciting destination in the city; simply sensory overload.

virtualdwight: Stay tuned for another post on Koreatown coming up soon!