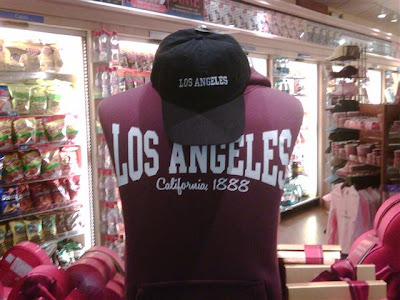 The Militant was at Los Angeles International Airport's Bradley Terminal on Thursday night to drop off mama and papa Militant, who were taking a trip to their unspecified Third World country of origin. As you may or may not know, LAX is undergoing a massive remodeling/expansion project, and things have been shifting around.

But seemingly untouched so far were the airport's gift shops, which sell overpriced snacks, curios and souvenirs to travelers, and for many travelers, the last place to buy stuff in the USA before heading to their destination.

Airport gift shops are known for selling souvenirs that represent the local city or region, and the products they sell can tell a lot about that locality, so the Militant wanted to take a look, through the eyes of a visiting tourist. As expected, one can find t-shirts, caps, jackets and mugs for the Lakers, Dodgers, UCLA Bruins and USC Trojans. There are a few t-shirts, sweatshirts and jackets bearing the name "Hollywood" of course. But the one that caught the Militant's eye (and curiosity) was a hoodie in a "crush" font that bore the writing: "LOS ANGELES - California - 1888"

Now, most of you who read the Militant Angeleno, even if you may not be militant Angelenos yourselves, know real basic Los Angeles history, especially the year that our great city was founded. What year was that, class?

That's right, class! Los Angeles was founded in 1781. September 4 to be exact. The Militant observes it every single year.

Okay, we'll get technical. Because in 1781 there was no state of California, and this wasn't even the United States of America yet. So for you smarter kids, what year was Los Angeles incorporated as an American city?

Correct again, class! Los Angeles was incorporated as a city under American law on April 4, 1850.

Well, we do know Los Angeles was not founded in 1888. It was already around for over a century, and was flying the stars and stripes on its civic buildings for 38 years. The Militant can't seem to find anything significant in Los Angeles that was established in 1888 (It obviously couldn't mean the founding date of LAX -- airplanes weren't even invented yet..duh!). He does know that the San Fernando Valley community of Chatsworth was founded in 1888, and so was the City of Orange, but none of those are printed on the shirt.

The shirt was made by the Lincoln Heights-based screenprinting and embroidery company Adin of California. Should the Militant let them know what's up (They're not very far from the Lincoln/Cypress Gold Line station)? Or is this part of a larger conspiracy to make Los Angeles appear to have less of a history by knocking off 107 years, and using a sweatshirt to "educate" tourists on our "history?" Get it right, fools!
Commandeered by Militant Angeleno @ 2:34 AM

The founding of USC Football, Chamber of Commerce?

The decade of the 1880s was a significant one in LA history - the arrival of the Santa Fe railroad in 1885 brought competition to the Southern Pacific, resulting in a fare war that saw prices for a ticket from Kansas City to LA drop as low as one dollar in March of 1886.

The resulting influx of Easterners set off a massive real estate boom, with skyrocketing prices and heated speculation in undeveloped parcels of land.

It wasn't the first growth boom Southern California had ever experienced, but it was far and away the largest and most spectacular.

1888 was the year the boom collapsed.

Historical reference for the curious: The Boom of the Eighties in Southern California by Glenn S. Dumke, Huntington Library Press, 1991.

...which still doesn't mean the T-shirt makes any sense, of course. :-)

(I was just replying to the Curbed editor's question, "What on earth happened in 1888?" You'd think the editor of a real-estate blog would know these things. :-))

A Google search that may or may not have been "WTF happened in Los Angeles in 1888 to drive a local t-shirt company to make money off it" found this from the Biocontrol Beat blog:

The ROOTS of modern biocontrol began not far from Rincon-Vitova’s Ventura insectary. The year was 1888. The place was downtown Los Angeles, where Union Station now stands. Before there was a movie industry or a modern metropolis, L.A. was renowned for its picture post card citrus orchards. However, southern California was pulling out its citrus orchards, as the pesky cottony cushion scale (insect) was killing the trees. Even covering trees with tarps and pumping in fumigant pesticides did not help.

Charles Riley, the USDA’s chief entomologist in Washington D.C., enlisted Alfred Koebele, a German entomologist residing in Los Angeles, to test the then novel theory of biocontrol. Riley theorized that exotic insects became pests in new lands by escaping the biocontrol organisms (e.g. predators, parasites, pathogens) keeping them at low numbers (in ecological balance) in their native homeland. Thus, the solution was going to the native homeland of the pest and importing native natural enemies to recreate the natural ecological balance.

Riley persuaded the state of California to put up $5,000 in expense money for Koebele to search Australia and New Zealand for cottony cushion scale natural enemies. Koebele started the first field insectary in 1888, placing 500 imported Vedalia lady beetles under netting covering a citrus tree at the J.W. Wolfskill ranch in downtown Los Angeles. Similar field insectaries were started at the J.R. Dobbins and A. Scott Chapman ranches in San Gabriel.

The media proclaimed it a MIRACLE, as the Vedalia beetles cleaned up the scale insect pests. The citrus industry was saved. Millions of beetles grew from the original 500. People came on weekend outings to the insectary orchards to pray, thank God for the miracle, and collect and spread the beetles around southern California.

That’s how modern biocontrol started in southern California in 1888, and then spread around the world.

I’ve also been meditating on the similar matter personally lately. Pleased to see an individual on the same wavelength! Nice article.

I am really enjoying your post very much and I feel that I am in the 18th century. ;)
And the shirt and the cap in the picture is looking awesome is it embroidered or just a simple print?