It's Time For Dodger Fan Fest 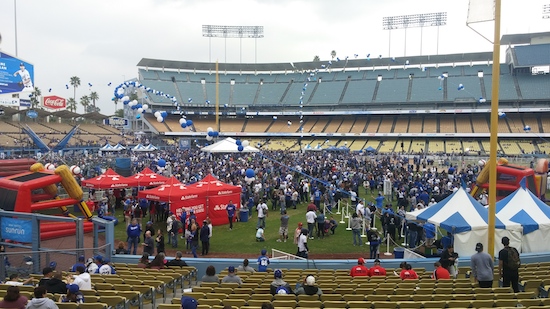 With the Holiday Season and the regular NFL season both finished, it's time to look forward to some baseball, and on Saturday, thousands of Dodger fans returned to Dodger Stadium for the second annual Dodger Fan Fest.

It was a semi-game day atmosphere, with cars in the parking lot, Dodger Dogs being consumed for the first time in 2016 and players in uniform (or at least wearing their jerseys), with everything but a ball in play, and a way to rev fans up for the upcoming 2016 baseball season (with Spring Training just weeks away).

The Militant decided to check out the fun, and took his familiar Metro Bus and hike up the street to be soon known as Vin Scully Avenue. Unlike the usual games, he was able to gain entry into the field level (well the tickets were free) and walk onto the field, which had the base paths cordoned-off for kids to run the bases, some baseball-themed games and rides, and a couple stages where Dodger players and broadcast personalities made appearances. And, for a fee, you could get a Dodger player or legend to sign a John Hancock for you.

Of course, this offseason left us with many changes: We have a new manager in former outfielder Dave Roberts (heading a generally-new coaching staff) no Greinke, a couple new pitchers, no more organ player and a whole lot more questions than answers. Will we get into the playoffs again? Will Kershaw dominate? Will Ryu return to form? Will new pitchers Maeda and Kazmir deliver? Will our bullpen improve? Will young players like Puig and Pederson be more consistent?

It was cool to be in the presence of blue-bleeding and blue-wearing Dodger fans for the first time since mid-October, but, maybe it was the overcast nature of the day, but the event felt a little...blah.

The smell of garlic fries wafting in the air prompted The Militant to queue in a very short line for an $8.25 tray of that stuff, which was far less salty, greasy and garlicky than usual. Honestly they haven't been the same since the Gordon Biersch license expired, but The Militant had no choice but to smother the dang thing in ketchup, mustard and onions for any semblance of flavor. Whatup?!

And then there was the dreadful organ music. Dunno if it was a recording or someone on the Dodger Stadium Roland Organ, but it definitely wasn't The Great Nancy Bea Hefley. The bouncy, cheery, ragtime-influenced playing of Hefley was tragically absent in place of someone (or a recording of someone) playing '70s and '80s pop songs that sounded like they were being played at a funeral. Even the great Hefley adds that wonderful cheery ragtime bounce when she does her renditions of '70s and '80s songs.

And thought it was great to see some Dodgers players again, it kinda gets old to hear some of them say,"We're gonna win the World Series this year!" as they have been saying every year (of course, that's what every MLB team says before the start of the season...). At least The Great Tommy Lasorda, who normally says that, gave us a more general, "We owe you fans a championship!" statement, which can't be argued with.

Maybe The Militant is getting older. Maybe these Dodger doldrums will fade away come April. Or in late October. Or maybe he would have had more fun if he had more cash to blow on autographs, souvenirs, or had his own Lil'Mils (that he knows of) to run around the bases with.

One thing's for sure, the "wait" for "next year" is getting shorter and shorter.

Additional pics, because it happened: