We R gathered here to salute this man called Prince Rogers Nelson, who left this life 4 the afterworld on April 21. Though he's undoubtedly associated with being a proud hardcore native of Minneapolis, Prince has left his mark on the City of Angels as well, even briefly claiming residence here in 2006.

Prince also associated himself with a few Los Angeles-area natives in his career: Revolution band member, keyboardist Lisa Coleman is a native Angelena (and half-Mexican). And protege and "Purple Rain" co-star Apollonia Kotero was born and raised in Santa Monica. 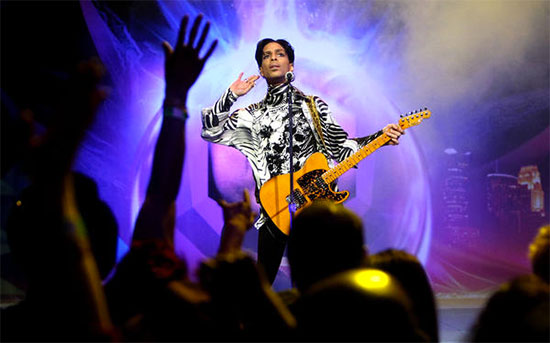 In tribute 2 a major icon of The Militant's generation (an unspecified generation lettered somewhere between W and Y), on the day that this city throws a public memorial event at City Hall, The Militant has decided to make another one of his Epic maps, this time saluting Prince. Sure, you would expect such a map to be made by The Militant Minneapolitan, but it's not like this town doesn't love purple things originally from Minnesota.

This map contains movie and video shoot locations, recording studios, his onetime residence in the hills above West Hollywood and every single one of the concert venues he ever graced the stage on in this town. After all, this town gave made literally made him a star. Did you know that Prince played his first concert outside of Minneapolis right here in Los Angeles?

He no doubt played at all the major concert venues in town, with The Forum being the place he played in the most, having graced the stage 23 times there. Prince was also a man ahead of his time, realizing the potential of Downtown Los Angeles, where he not only shot music videos and films here, but opened a night club in DTLA, just eight months after the Los Angeles Riots.

Commandeered by Militant Angeleno @ 12:16 AM

I wish there were more places like this, because it was simply too amazing for words. I came here with my boyfriend the other night, and it was absolutely fabulous. The use of wood throughout the venues Chicago adds a very warm and inviting feel to venue.