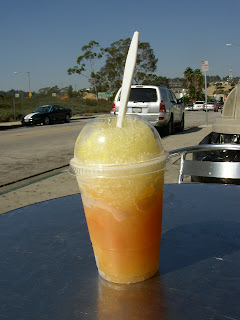 The Militant usually employs witty/corny puns for the titles of his Pulitzer-Prize* winning series on Ethnic Iced Desserts, but he was simply at a loss to find one for today's entry. But oh well. He figured it was best to go ahead and write the damn post than to mull about which pun to use for the title of today's entry. After all, that might cost him another week of not posting...

Lest you think that shaved ice desserts were strictly an Asian phenomenon, the Militant was happily pleased to find one from Latin America, namely Mexico. It all started at a conversation the Militant had with a woman at the Bhan Kanom Thai dessert shop in Thai Town as the Militant extolled the virtues of shaved iced desserts found in various Asian countries. The woman tipped the Militant off to Latino shaved ice treats, namely this particular location in East Los Angeles. So the Militant made sure to drop by during his recent Sunday adventure in The Real Eastside.

In Mexico, raspados are basically snowcones. The term originates from the Spanish verb raspar, which means, "to scrape." So they literally mean "scraped ice." When the Militant got on Ford Boulevard, he made a beeline to Raspados Zacatecas, a HITW (that's acronymspeak for "Hole-In-The-Wall") wonder in Eastlos, worthy of coverage by this guy (who already covered it in an episode that aired this past July and August - a poster in the store said so). Named after the central Mexican state, this little stand - perhaps no more than 12 feet wide - sells raspados in over a dozen different flavors for just $3 each. The Militant asked the lady at the counter (well, she was like the only person running the place) in Spanish if they raspados were available in flavor combinations, or one flavor only. She replied that you can order up to two different flavors. So the Militant ordered the mango and the piña (pineapple) flavors, and she proceeded to get a plastic cup, fill it about halfway with ice from a shaving machine, then grab a ladle-full of mango chunks suspended in some sort of jelly-syrup from a barrel-shaped container you usually see aguas frescas vendors use. Then she took a second trip to the ice shaver and managed to make a volcano-like mound topping the cup with a crater in the middle and filled that with a similar pineapple jelly-syrup suspension, put a dome cap on the cup and spoon inside, and voila - raspados!

So simple - shaved ice and fruit chunks in natural fruit syrup - yet so good. This really hit the spot on a warm Sunday afternoon. Locals walked in or parked right in front to grab some raspados, even getting multiple cups to-go in cardboard drink holder trays. They knew what was up long before the Militant did. 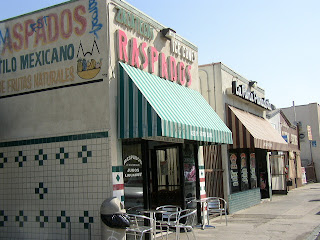 Raspados Zacatecas is so small you probably can't eat inside. They have a couple tables right on the sidewalk, but most customers ordered theirs to-go. The place is adorned with maps and Mexican history posters, and a couple native Mexican dolls stand guard on the counter. There's a TV that shows one of the Spanish-language TV networks and a sign above the main door which reads, in Spanish, "Through these doors are the most beautiful women in the world," though the Militant wasn't sure if that was a reference to the staff or the customers (if it was the latter, that certainly rang true for one such patron!).


Resplendent Raspados...? (Actually that one might have worked, but at that point it was too late to change the format of this post)

Raspados Zacatecas serves their eponymous specialties in about 14 different flavors: coco (coconut), nuez (walnut), vanilla, rompope (Mexican eggnog with ground almonds), durazno (peach), fresa (strawberry), limon (c'mon, you can figure that one out), cafe (that too), jamaica (hibiscus tea), tamarindo, piña (pineapple), mango, guayaba (guava) and cajeta (sweetened, carmelized milk). Raspados can be found all over The Real Eastside as well as certain places scattered around Los Angeles County. There was even another raspados stand spotted by the Militant in his recent Real Eastside journey, at the corner of East 3rd St. and Indiana Ave. (this one even having the cojones to boast the words "Home of the Original Raspado" on its wall). If you know of any other good places to find raspados, please comment!


* In the Militant's dreams.
Commandeered by Militant Angeleno @ 1:36 AM

The flavors are good but the ice too chunky. An authentic raspado needs hand shaved ice, it makes all the difference in the world!

chimatli: ...and, where to find the more authentic raspado? You're not being much help here.

You can wait outside of any elementary school in East Losi at 3pm and you will find a Raspado man selling out of a cart. These go for about a dollar and come in a paper cup. If you smile sweetly, Raspado Man will give you extra leche.

This article was exceedingly completed. Generic Prozac World had been hoping to discover equivalent written content and this website supplied me with everything that I needed. I will probably check Generic Lasix 40mg

I enjoyed reading this article...really I loved this.thank you and good luck for next.
Made a post
More bonuses
Next page