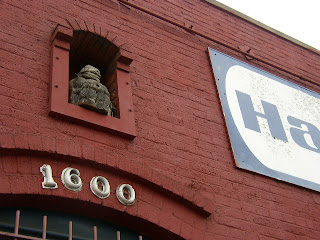 Washington Blvd., obviously named after the first President of the United States, was part of the City of Los Angeles' plan to designate a series of major east-west thoroughfares after every U.S. president (hence boulevards Adams and Jefferson), but eventually hit a snag in 1912 when the City annexed the town of Colegrove (now part of today's East Hollywood and Koreatown districts), which already had streets named in honor of presidents Madison and Monroe (plus, how would the city honor the nation's 5th president -- another Adams Blvd?).

With Washington having been somewhat of an industrious man, it was perhaps a lucky coincidence that our street named after him would be somewhat industrial in nature, with large bakeries towards the western end, mortuaries (serving the nearby Rosedale Cemetery) in the middle, and more heavier industrial warehouses towards the east.

The other week, the Militant biked down the latter portion of Washington, where the rows of tacquerias and pupuserias transition into more bulky, spartan facades. Here, at the corner of Washington Blvd and Long Beach Ave (in a neighborhood known as Menlo Park), where (M) Blue Line trains snake through the middle of the street on their way to and from the high-speed dedicated right-of-way, stands a nondescript red brick building displaying nothing but a big blue and white sign bearing the name "Hanson Tank" in large block letters -- and a curious weathered concrete object, just a little over a foot tall, nestled in its own little alcove, above a doorway. Whatever could it be?

Years ago, a slightly younger Militant took a makeshift Blue Line tour with a handful transit enthusiast friends and acquaintances. One of them invited a tour guide, whom the Militant will call the Militant Elder (really, his name slipped from the Militant's mind), whose descriptions of otherwise overlooked structures, objects and sights helped change the way the Militant Angeleno sees the city.

The Militant Elder stood up in the aisle of the moving light rail car and pointed to the object in the Hanson Tank building. He told the group that during World War II, when most Japanese Americans were put into internment camps, there were some who avoided being sent to camps and lived secretly among society. So this building, during the War, served as a clandestine temple where Japanese Buddhists were allowed to worship in secret.

The Militant was blown away for many reasons - that in a country where people were supposedly guaranteed freedom of religion that they had to worship secretly, that Japanese Americans had to go through so much during the war, whether interned or not, and that there were little nooks and crannies overlooked by Angelenos every day, only after being discovered did they yield stories unto themselves. But the most amazing thing was that the Washington Blvd Buddha was not a victim of erased history. The Roy E. Hansen, Jr. Manufacturing company, which sells pressurized tanks for industrial use, deserves a lot of credit for letting that little tidbit of culture, faith and history remain, especially when they could have easily removed the statue and covered the alcove with bricks like what was done to some of the windows in the building. But then, that would have just been bad karma.
Commandeered by Militant Angeleno @ 2:18 PM

There's another explanation that Coop gives at this page: http://positiveapeindex.blogspot.com/2006/10/billiken-1600-washington-blvd.html
where he calls it a billiken http://www.billikenlore.com/

Whatever it is, it's cool that it has survived in that little alcove.