Give Us This Day, Our Pumpkin Bread 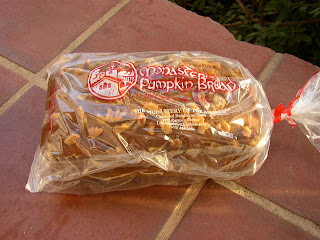 Hollywood locals have been buying - and eating it - for years. A certain local politician gives them away as Holiday gifts to constituents annually.

On the Militant's Thanksgiving table will be a loaf or two of a very Los Angeles tradition, the very heavenly, divine Monastery of the Angels pumpkin bread, made by Dominican (no, not that Dominican, the other kind) nuns in Hollywood.

The Militant heard about this tradition but more recently, Militant Operative Blackbird, who has been deployed on various airlift missions to deliver them, told him exactly where to find it. 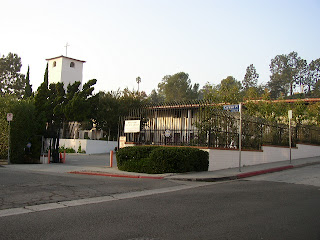 The Monastery, located a few blocks north of Franklin and Gower, near the Franklin Village neighborhood, is located not far from the bright lights of The Boulevard or the usually molasses-like flow of the 101 Freeway. It has been there since the 1930s when the nuns moved from the USC area and bought out a mansion for a sweet deal.

The Militant rode his bike up to the Monastery and picked up his loaves on Wednesday afternoon at the gift shop where they already had several boxes of the good stuff waiting for purchase.

The walnut-topped semisweet, moist goodness that is the Monastery pumpkin bread costs $8 a loaf at the Monastery's gift shop, open from 8:30 a.m. to 5 p.m. They're closed today of course, but you can always get some for Christmas, or any other time. Demand is high during November-December of course, but it all works out since there's an abundance of source material right around this time of year.

Some of you Iron Chef types or Rachael Rays in waiting can try to make this treat by yourself, but hey, these sistas have been practicing a form of sustainable living for ages, so the Militant supports their habit. Besides, though priests might have gotten a bad rap recently, nuns can do no wrong. They're more Mother Teresa than Mother Superior these days anyway.

I wonder if the nuns put some virgin magic into the Loaves? Maybe vigin olive oil? Anyway now that pumpkins are still around, maybe at least fresh pumpkin was used to make the pumpkin bread.

For eight dollars I would guess they used real pumpkin and not canned pumpkin, Holy water probably is an option...

I've been wanting to try this stuff since I first heard Councilman LaBozo passes them out like favors to lobbyists. Since the honorable Tom will likely never bestow one upon me I'm definitely gonna go up to the nunnery and get me some this coming weekend!