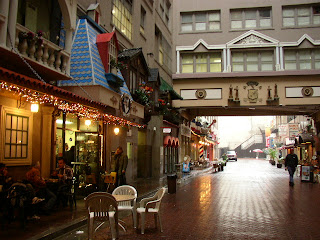 Part of the Militant's nooyeah's resolutions is to shrink the number of places in this City that the Militant has yet to go to. One such place is a tiny corner of Downtown - an alley literally - by the Jewelry District called St. Vincent Court.

He has passed this location off of 7th Street many times, even as recently as New Year's Eve afternoon, most recently hearing about the abundance of Mediterranean-Middle Eastern food spots nestled in there.

Walking around Downtown after checking out a political rally, the Militant decided to pop in and check out what it's all about.

What the Militant found was a seemingly hidden "alternate world" where due to the tunnel-like entrance of the alley, it appears to look like night even during the day, with its storefronts adorned with faux-European awnings, porticos and statues, which apparently was a relatively recent addition to the court. Most of the storefronts are cafes, delis and restaurants serving what many assume is Persian food, when in reality the majority of them are Armenian-owned, as evident in the establishment names (Garo's Deli, Sevan's (Armenian for "Steven") Garden Kebab House), menu items (Armenian borek pastries and basturma sandwiches) and the sound of Armenian-language conversations emanating from a cafe where several gentlemen are having a small, shot-glass sized cup of Armenian coffee (quite potent from the Militant's experience). In addition, some of the Militant's Armenian community operatives have told him that many of the jewelry businesses nearby are Armenian-owned, making this a micro-enclave of Armenian businesses in Los Angeles - a Littler Armenia, if you will, separate from the designated community in the East Hollywood area, some five miles to the northwest. The Persian and Greek references are no front, either, as the Armenian culture is a highly disasporic one, with Many Armenians settling in primarily Middle Eastern and European countries after the 1915 Armenian Genocide, yet maintaining their cultural heritage and identity - even today.

Signs by the entrance read "Historic St. Vincent Court." An alley? Historic? O RLY? But a state historic marker on the eastern wall of the alley indicates that the site was home to Saint Vincent's College, an all-boys Catholic school, from 1868-1887. The school eventually became Loyola College and merged with the all-girls' Marymount College in 1973 to become today's Loyola Marymount University in Westchester.
Commandeered by Militant Angeleno @ 8:24 PM

i had a chance to eat at sevan garden kebab house, and i must say its the best food i had in long time the kebabs were great, i must say you guys should all try this place out.