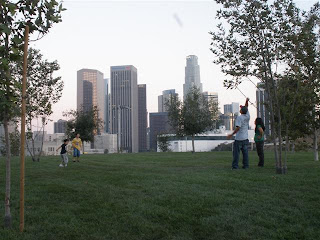 The Militant is a prophet.

When he first developed his passion for the Downtown area circa early 1990s (when there was still nothing there), he read the Downtown News and its seasonal development updates. Learning about this "City West" thing and what was then planned to be a bunch of highrise buildings west of the 110 and north of 1st Street, the Militant for some reason envisioned... a park.

Even when that land-grabbin' LAUSD decided to build the beleaguered Learning Center Formerly Known As Belmont...the Militant still envisioned...a park.

On Saturday, his vision was fulfilled. Look out, folks.

But as the brand-spankin'-new Vista Hermosa Natural Park opened this past Saturday, the Militant on that day avoided the crowds (as well as being recognized in public). Besides, being the active Angeleno that hs is, he took part in the Mayor's Central Area (see, even Antonio gets it) CommUNITY Day of Service, double-volunteering at a different, unspecified event that day. But other blogs were able to cover the action, (despite them incorrectly touting that VHNP is the first new Downtown-area park since the time when Frank Rader was mayor (No, all you vestigal football fans, not the Raiders...oh never mind...).

Instead, the Militant was there Sunday right after sunset, and despite the "Sunrise to Sunset" hours, there was a healthy number of kids running around, families playing soccer and couples making out as the lights of the nearby skyline started to brighten. And yes, did the Militant mention the park has a killer Downtown skyline view?

All parks have their iconic features. Locally, Echo Park has a lake, paddleboats and a lotus bed...Okay, a lake and paddleboats. MacArthur Park has a lake and a bandshell. And Griffith Park has a whole bunch of iconic features. Vista Hermosa, while not under the guise of the City's Recreation and Parks system but rather the Santa Monica Mountains Conservancy, has a number of iconic features: A big-ass soccer field, a windmill, a view of a victorian house atop the hill, and of course, that killer Downtown view. There's also all sorts of eco-friendly brownie points earned here, from the parking lot with permeable paving, to the localized drip irrigation, to the "green roof" planters atop its two structures.

The Militant, always wanting to be a step ahead of the rest, brought his trusty Militant Cam and took some video for you all, including a 360 shot and a walk through parts of the park:

And lastly, lest you think that the whole "Natural Park" thing is somewhat of an arrogant label, come visit the park itself. Not only does it feature native flora, but it smells natural as well, with the aroma of sagebrush, thistle and native flowers surrounding you. And all these plants are still young - wait till they all grow up! Despite being surrounded by the Beverly Boulevard street bridge, the Belmont Station apartment complex, the new learning center and, yes, that skyline view again (can't get enough of it!), it's a true urban oasis.

Please come. It's waiting for you.

One final note - as the Militant left the park on Sunday, though the sight of neighborhood kids playing in the park was a happily welcome sight, he still caught sight of boys playing ball in an alley across the street, and little kids playing in a parking lot not more than a block away. Old habits die hard, but here's hoping they find their local treasure soon.
Commandeered by Militant Angeleno @ 2:13 AM

I'm confused. Your name is Militant. Doesn't that mean that instead of praising the park, that you should have been out there with the protesters who called this a land grab by the Santa Monica Mountain Conservatory and who said what the neighborhood really needed was more low income housing.

Me thinks you might be losing your militant edge. Next thing you know, you will be sipping a latte, while driving your 2.5 kids to soccer practice in your volvo wagon. ;)

The Militant doesn't conform to anyone's preconcieved notion of "militant."

The SMMC only developed the park; the land was owned by the LAUSD, who already did the grabbing long ago.

And not knowing the bigger picture, you failed to recognize that the land was originally envisioned to be upscale high-rise commercial and residential developments. And like you really know what that neighborhood needs. Did you NOT read the part about the kids playing in the streets and parking lots? Massive FAIL for you!

The park looks nice; it is always good to see greenery like a park pop up in a busy urban area.
The area you mention near the formal Belmont high(name) has changed so much its crazy and just in the last 5 years or so. I passed by the other day and there is basically all condos, lofts, apts.There is one old house right next to the Old Belmont it looks kind of odd now since it is surrounded by all the new stuff.That is the same house that the cholos were hanging behing in the movie "Colors"
It used to be ruins which I liked but it was not to appealing for most folks.
My friend is moving into the Belmont Station Apts under the low income program but that area
Was a piece of graffiti history, a place where we went to paint on a Sunday afternoon, Generations of graffiti artists expressed themselves there, and we can’t forget the Headhunters gang, homeless,addicts,and the pysas playing the ancient Aztec game =)

The sad thing about the Belmont Learning Center debacle is that the students and alums of the actual Belmont High School had to unfairly bear the stigma, when the OG Belmont had absolutely nothing to do with the Learning Center (I went to Marshall High, and I even think it's sad!). Though it doesn't help when they prematurely embossed the words "Belmont High School" onto the Edward R. Roybal Learning Center's northern wall facing Temple Street.

Oh yeah, Militant, how do you "double volunteer" for something? Is that even possible?

the Militant needs to organize a ride sometime!

Anonymous: Oh he already has. Thing is...you may or may not know about them.