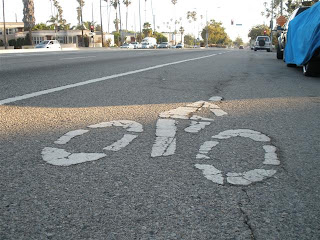 The Militant, having consumed mass quantities of barbecued animal carcasses (Ooops, there goes the Militant's vegan readership...) and just plain mass quantities of food, period on July 4 during his operative's annual bash at an unspecified part of NELA, decided to spend his July 5 proactively working off his holiday NOM'ming....with a bike ride.

As mentioned last year, the Militant doesn't consider it Summer until he's visited the beach. And though he's already visited a beach within the past several weeks (Memorial Day), alas, he did not get there on his bike.

And so the weight loss-conscious Militant decided to embark on a 30 something-mile roundtrip ride from his compound to Venice Beach and back (actual start and end points omitted for security reasons, but add on another 1-3 miles...). He'd biked to the beach before, without the aid of a car or bus, back in 2002, but used primarily major streets, including a close bristle with a Metro Bus on Wilshire and Santa Monica.

This time, more route-smart, the ride utilized a combination of bike-friendly streets and established bike lanes. The Militant started on an unspecified route from his secret compound to Oxford Avenue and veered west on 4th Street, riding over burnt-out firecracker and sparkler shells littering the street (who cleans that up, anyway? Do they just expect the street sweepers tu push it into the gutter and have it wash into the Los Angeles River and on to the sea?). Then right after Wilton, Koreatown gave way to the tony neighborhoodness of Han Kook Hancock Park. 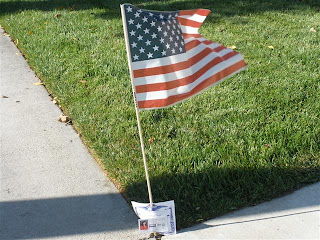 The Militant headed south on Mansfield Avenue, where he saw every lawn outfitted with an American flag (pictured left). How patriotic for an entire neighborhood to do that - until upon closer inspection, it seems the local realtor decided to place them there as a marketing move. Ah, capitalism.

Why Mansfield? Well, any excuse to stop on over by the Miracle Mile Red Mango on Wilshire...(hey, a Militant's gotta reward himself somehow).

After finishing off his medium original creamy froyo treat with strawberries, mango and granola, he continued down Mansfield onto Olympic, where he turned west for a couple blocks and then headed south onto La Brea and a quick diversion onto Redondo Ave, and then meeting the grand bike lane at Venice Blvd.

While heading due west on Venice, the street reminded him of the grand, wide, landscaped radial boulevards in many cities of the world, wondering about a possible future vision for that thoroughfare (the Militant is all about vision).

The iconic Helms Bakery sign told him he was already approaching the Culver City area and that he had nearly reached 2/3rds of his way towards his destination. 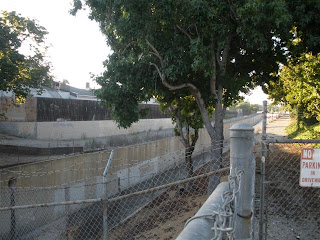 On past Palms to Mar Vista, he passed by a flood control channel (pictured right) that he had never seen (or really noticed) before. It's the Sepulveda Channel, which runs from Westwood onto Ballona Creek, and runs largely under McLaughlin Ave. south of Venice.

After passing Lincoln Blvd., the Militant was in the home stretch, with the shadows growing longer and the air getting cooler, he knew he was close to the coast. 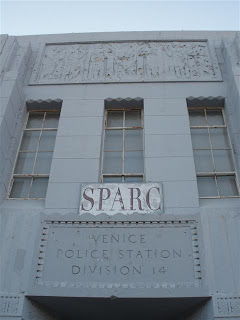 He passed by the Venice civic center between Oakwood and Shell avenue, which boasted an active fire station (LAFD Station #63), the old Venice city hall (which was politically decomissioned since 1925 when Abbot Kinney's Venice of America resort town got annexed into Los Angeles) and the former LAPD station (pictured left), now home of the Social and Public Art Resource Center, responsible for many of the area's murals.

Though the police station has since moved to Culver and Centinela and operates as the Pacific Division, the "Division 14" still rings true today as a passing LAPD cruiser bears the number 14 on its rear trunk.

Just mere blocks from the beach, the Militant stumbled onto Venice of America Centennial Park, built in the boulevard's large median, with the Venice branch library on the west end and a pocket park with native bushes and three paved paths with steel railroad track outlines stamped onto them. Of course, the large median of Venice was once the Venice Short Line of the Pacific Electric Red Cars, and the long-gone trolley system was instrumental in bringing Southern Californians to Venice of America, which just had its 103rd birthday on July 4.

The Militant decided to pay homage to the old railway when he happened upon a trio of ducks there (Duck-to-English subtitles added): 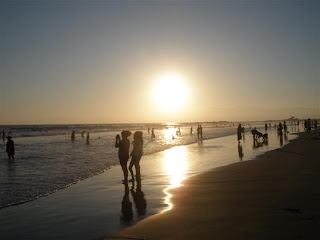 After the quackery, the Militant drifted a few blocks west and finally reached the beach (pictured right). He locked his bike and walked knee-deep into the Pacific, as part of his annual summer ritual. Summer, definitely, at long last.

Incidentally, the Militant did a bicyclist count in a similar manner as he did when he rode to the Americana at Brand last month. Only this time, his count was for the one-way trip to Venice Beach. The count? 65. Yes, 65 bicyclists in 15 miles (and no, he did not count the bicyclists on the South Bay beach bike path). That's about 4.3 bicyclists per mile! 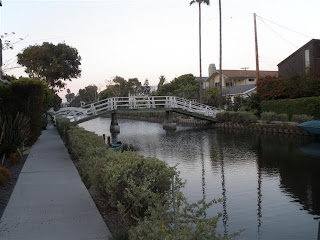 On his way back, the Militant spent a few minutes looking at the awesomeness that is the Venice Canals (pictured left), as it's the first time in years since he's been there.

On his way back, he heard the sound of a live band playing the Rolling Stones' "You Can't Always Get What You Want." Clune Avenue was blocked off for a neighborhood block party, though the Militant kept a safe distance...he looked rather out of place (if you know what the Militant means...) furthermore, a sign on the blocked-off street barriers warned people that only people with wristbands would be allowed in. Uh-huh. You can't always get what you want, indeed.

As darkness fell, he found his way to Washington Blvd (near where another local blogger ended his long-ass bike ride on July 4), and then on to Lincoln near the Marina, then on to Maxella and Glencoe where he found Culver Blvd (the site of another former Red Car median, now turned into a bike path) and shot through to Culver City, then back to Venice and back the same way via Redondo to the compound.

Riding a bike a night offers a totally different experience, not just visually, but aurally - the sound of buzzing electric power lines along Culver, and the chirping of crickets in various pitches along tree-lined 4th street. It was almost 11 p.m. when he pulled up to the compound. What a way to work off all that food on the 4th. And what a way to spend his Independence Day weekend (come to think of it, we're in for 4th of July 3-day weekends for the next three years).

Some more pics of interest from Venice Beach: 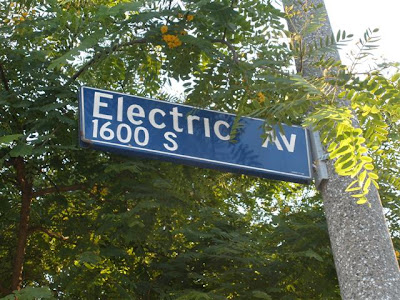 We gonna rock on to...and then we'll take it higher!
No, not the Eddy Grant song, but a former Red Car right-of-way (hence the name). 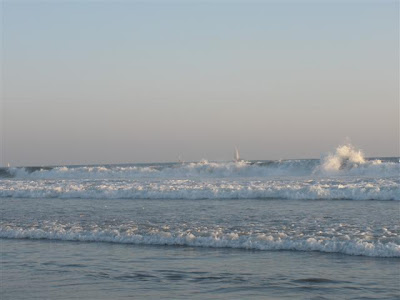 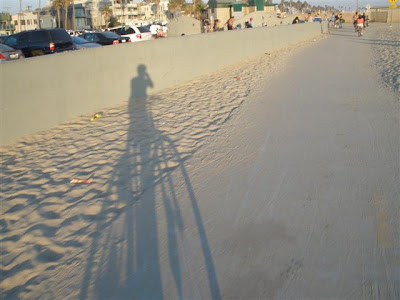 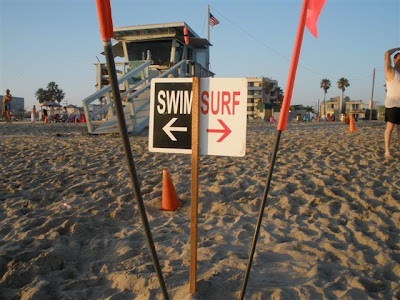 The choice is yours. 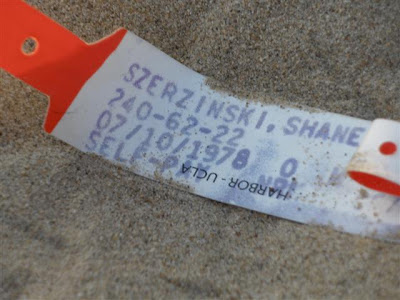 Hmm, looks like a certain Harbor UCLA patient just couldn't wait to get to the beach...
Commandeered by Militant Angeleno @ 8:37 PM

Cool ride. I did that same ride a few years ago, starting in Los Feliz. Unfortunately, this year, I will have to wait until next month, when I can afford to replace my bike, which was stolen last week downtown. Boo Hoo.