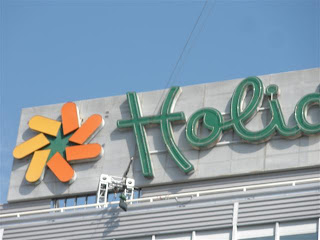 The Militant realizes full well that today is Earth Day, and while everyone is expecting an ecologically-themed post, the Militant asks, rhetorically, "Why only for today?" Earth Day should be every day. He recycles, rides his bike and hops on the train pretty much every day anyway, so it should be no big deal...

The Militant was walking down Figueroa today with an unspecified relative to visit L.A. Live when all of a sudden a U.F.O. (Unspecified Flying Object) shoots across Fig.

Okay, relax, the space aliens weren't turning Earth Day into Independence Day or anything. The object was being suspended by a cable that stretched from the roof of the Holiday Inn all the way to the Nokia Theatre. Whatever could this be? 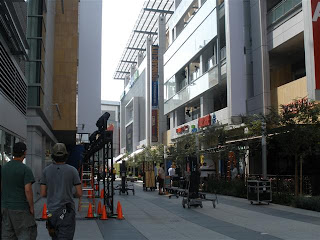 Upon closer inspection, the Militant and his unspecified relative approach L.A. Live's "canyon" walkway and witness a crew busy putting up scaffolding, an archway and spotlights. What is up? Some red carpet event?

After doing some intense Militant research (okay, so the Militant just went up and asked), the activity was the construction of a movie set, and the floating object was a test weight, made up mostly of sandbags, in lieu of a camera, which would swoop down L.A. Live's canyon to capture
the scene.

"So what's the movie called?" The Militant asked. 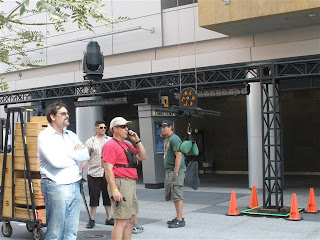 Further Militant research turns up nothing for a movie in production named "Rasputin" but there is confirmation that the production codename for Iron Man 2 is indeed "Rasputin."

So all you Tony Stark fanboys and fangirls, L.A. Live is the place to be tonight!
Commandeered by Militant Angeleno @ 6:13 PM