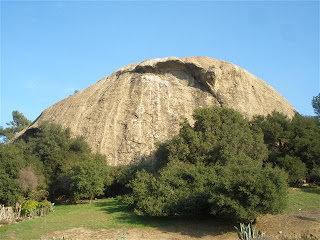 Though the Militant hasn't made much good on his New Year's Resolutions to increase his output lately, the recent phenomenon is mainly attributed to the fact that lately he hasn't strayed much from The Militant Compound, and when he does, it's in a part of town already covered in This Here Blog.

The Militant is no stranger to the venerable Northeast Los Angeles community of Eagle Rock, but he's noticed he hasn't yet given the place the props it deserves, so passing by the vicinity on Thursday, he decided to give some hot Militant Love on the MA Blog.

The community may be well known for its pizza institution, hipsters or the one-time residence of the President of the United States, but by far it's known for its eponymous geological feature: The Eagle Rock.

The 12 million year-old conglomerate rock formation stands like a sentry just north of the 134, a familiar sight for this Militant ever since his childhood, whenever the Militant's family trips took him to the Rose Parade or to relatives' houses in the San Gabriel Valley.

But something always bugged him about The Rock (no, not that one). It was the description of the geological feature: that the rock formation resembles "an eagle in flight."

Flight? WHUT? He don't see no wings! It's obviously an EAGLE HEAD. When the Militant's parents drove Lil' Mil down the 134 back in the day, they'd tell him, "Look at the Eagle Rock!" and Lil' Mil would say, "Yeah! I see the head of an eagle!" THE HEAD OF A FREAKING EAGLE! Yet no book, publication or website ever acknowledged this. Are they crazy or what? AN EAGLE HEAD!

What are these historians? Blind? See the beak? See the eye? IT'S AN EAGLE HEAD.

If they can't see it, and you can't see it, then - surprise - the Militant is the first Los Angeles writer/historian to acknowledge it as A FREAKING EAGLE HEAD.

Anyway, the Militant decided to take a closer look at the thing - and was pleasantly surprised. Most people simply pass this thing on the freeway at 65 miles an hour and never give it any more thought. 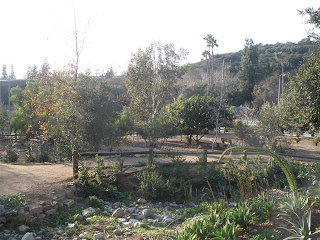 But at the foot of the rock - right at the very northernmost reach of Figueroa Street - is a neato little public park, with benches and all, decorated with native flora (pictured left). There's also a narrow, 1-mile hiking path called the Eagle Rock Canyon Trail, which the Militant walked for a few yards, ultimately deciding to cover this hike in a future blog post (don't wanna put all his eagle eggs in one basket!).

It turns out the little park and the trail are relatively new, just installed nearly two years ago by The Collaborative Eagle Rock Beautiful. Feel free to visit the park and walk the trail (treaded shoes/boots recommended) and you just might see native tobacco plants used by the Tongva Indian tribe and the caves used as a hideout by desperados ages ago.

He also discovered one lucky Eagle Rock resident lives right below the rock - there's a single-story house right at the base. Imagine looking up at that every morning (surely the occupant must take the whole thing for granted by now...).

The Militant spent the rest of the day with nearby operatives who weren't aware of the history, which wasn't very fun. But the Militant can change all that one day by taking them on a little hike...
Commandeered by Militant Angeleno @ 12:51 AM

It TOTALLY looks like an eagle head! The whole eagle in flight thing is ludicrous.

Although the eagle head I see is at a completely different angle than the one you so expertly diagrammed. What you label as the eye looks like a beak, to me - like the rock is one big head, facing forward, with the beak jutting out and you can't really see the eyes.

Someone also told me a rumor that the rock resembles George Washington (?) and thus is the only rock that makes Two great American symbols at once. Don't know about that one.

Take a look at Eagle Rock from these angles. You will see a bird in flight.

Oh, okay, the Militant sees now - so you need to see the thing *at a certain angle at the right time of the day* to see the damn flying eagle. Yet, the eagle head can be seen 24 hours a day, rain or shine.

It just boggles the mind folks.

Maybe the Militant's head is just wired differently than the rest of y'allz.

I dunno, Militant, I drive by the Eagle Rock all the time, and I've always seen it as an eagle in flight, never as an eagle head! Maybe it's like those optical illusion games we used to look at as kids. (It's a young lady! No, it's an old lady!)

I thought it was an eagle head for the longest time too. And then one afternoon (around noon-ish, when the sun is overhead) I was on the 134E and I saw the eagle in flight shadow. I was like, Whole E. Crap! Almost caused and accident cuz I was so enthralled. I should have pulled over and snapped it.