Some 'Luv' For The Eastside 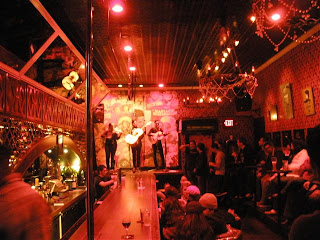 Well, 2009 was a landmark year for The Eastside (that's in The Real Eastside, you geographically-challenged hipsterfool), namely the (M) Gold Line's opening in November to Boyle Heights and Eastlos that brought places like Old Pasadena, Universal City, Koreatown and Downtown Long Beach just a swipe of a TAP card away. It was not just a light rail line extension, but an extension of the mainstream consciousness of Los Angeles finally recognizing The East Side, note the foodies of the world arriving past the eastern bank of the Los Angeles river to get their squash blossom quesadilla fix. Hopefully 2009 will go down in history as The End of the Erroneous Eastside Era, as now more correct terminology like "East of the Westside"are starting to come into use - a term the Militant can perfectly tolerate.

Since this is the first post of twenty-ten, the NEw Year is a great time to start new traditions, so here we go. Today's destination is an awesome bar in Boyle Heights called Eastside Luv Wine Bar y QUEso that simply blew the Militant away during his first visit last month. Located on the corner of 1st and Bailey right in the heart of the Mariachi Plaza district, they couldn't have picked a more appropo name.

Started in 2006 by five lifelong friends in their late 20s-early 30s from nearby City Terrace (who may or may not be friends of one of the Militant's operatives) who bought the former Metropolitan bar and gave it a re-do, according to their website, "to communicate the LOVE we have for our Chicano/Pocho/Latino EASTSIDE experience." They also re-designed the interior "to look and feel like many of the beautiful turn of the century Victorian and Craftsman Bungalows that dominate Boyle Heights... only a bit sexxxier." A dumpy ghetto dive this place definitely is not!

Inside, the walls are adorned with Lalo Alcaraz (of "La Cucaracha" fame) artwork, and a Cheech and Chong flick circa late 1970s is projected up high (no pun intended) on one of the walls. The reddish, velvety room centers around the bar, which is actually waist-high and the bartenders work below floor height. Instead of stools, there are lounge chairs.

The bar also doubles as a performance stage; the big draw is their Mariachi-oke nights, on the first Sunday of the month, where an all-female 3-piece Mariachi (who sound like there are more than three people playing) will accompany anyone who wants to get their canciones on. And yes, the cultural fusion of people singing Mexican songs in a format that was popularized in Japan, in a bar in Boyle Heights (once one of the largest Japanese American population centers of the City) was not lost on the Militant at all.

Hey wait...(looks at calendar) this is the First Sunday of the Month! The Militant may or may not be there tonight (if you do see him, or think you do, raise a fist!)

Of course, for you hardcore drinkers, this isn't a full-service bar. They specialize in beer and wine. But this place is all about the vibe, the experience. It's classy, but not snooty, it's just real. It makes the Militant feel at home. But if you do wanna get borracho, the train can take you there and back, no need to worry about parking (or DUI checkpoints). 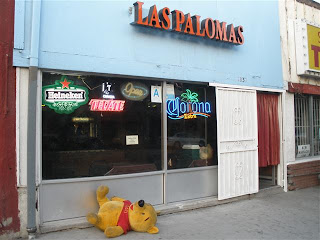 But if you do want that Eastside ghetto dive experience, just go next door to Las Palomas bar. Winnie seems to dig it. Maybe a little too much.