Lotus Festival To Return In July 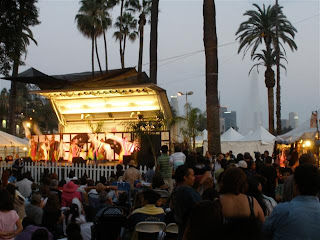 After a depressing one-year hiatus, the City of Los Angeles' Lotus Festival will be back again this year, returning to Echo Park Lake on the weekend of July 10-11.

The Militant learned of the festival's return thanks to an operative's tip after the said operative received paperwork from the festival organizers for entertainers to perform at the fest.

As it turns out, the paperwork comes not from the City's Recreation and Parks department, but from "L.A. Lotus Festival, Inc," an assumed non-profit entity with an address of 2001 W. Beverly Blvd in the Historic Filipinotown neighborhood. Apparently the organization of the festival is now off the hands of the City (which has more pressing matters these days), although the City does appear to remain involved in the Festival to a certain extent.

The website to the festival points to a dead link on the City's website, which may or may not change into a dedicated domain name in the near future.

As to the fate of the now-absent lotus flower bed -- once the largest lotus bed outside Asia -- it is still in question. Analysis of the lake pointed to a combination of contaminants and the end of the natural cycle of the lotus bed as the reason for its demise. A total renovation of Echo Park lake is proposed, which will involve draining the lake's water, and must be done before any lotus restoration takes place, but with the current state of the City's you-know-what, the timeline for the project remains in question.
Commandeered by Militant Angeleno @ 3:52 PM

You're a typical Ange-beaner LOL. I hate LA cause it's full of criminal beaners, the 3rd world