My Name Is Alfred Mahanta, And I Am The Militant Angeleno 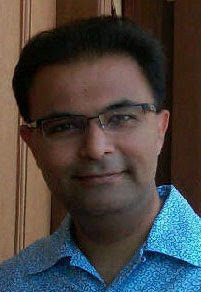 Whatup?! This is the Militant here, and he may or may not have something to say.

In a week where a certain celebrity has decided to openly reveal his sexual orientation, the Militant felt moved and inspired to reveal a little something about himself of his own -- himself.

He's usually not inclined to speak in the first person, but he'll make an exception just this once:

My name is Alfred Mahanta, and I am the Militant Angeleno.

I was born on December 3, 1972 at Ross Loos Medical Center (now Silver Lake Medical Center) in what is now known as Historic Filipinotown. I grew up in parts of Los Angeles that were for the most part "unspecified" during my youth -- today they are parts of Koreatown and Los Feliz.

My parents really did come from an "unspecified 3rd world country." Well, two of them - My dad came from India and my mom came from Indonesia. I went to Alexandria Avenue Elementary School, Bancroft Jr. High School and Fairfax High (Go Lions!), class of 1990. I spent two years at Cal State Northridge before graduating with my communications degree from UCLA.

I really didn't know where I fit in. There weren't many Indian-Indonesian-Americans I could identify with. So really I was cool with everybody and tried to learn a little bit from my Latino, Jewish, Asian and African American friends at school. One of my best friends, Roel, whom I've known since the 5th grade, introduced me to his own culture and I had Filipino food every time I hung out at his house. That led to a lifelong fascination with foods from different countries of the world, and a place like Los Angeles certainly has an abundance of that, which is but one of the reasons why I love my hometown so much.

So how did this Militant thing start?

My life changed forever when I picked up a Los Angeles Reader from the Music Plus store (remember those?) sometime in the late '80s and the cover story was the Pacific Electric Red Cars, and what caused their demise. That just like blew my mind. I had no idea this City had a rail transit system, running through streets I've driven, walked, biked and ridden the RTD bus on. There was much more to this City than I thought there was.

That led to an obsession with Los Angeles history, which grew and grew and remains with me today. That this City has all sorts of amazing layers of history and human stories, it had a real soul, contrary to what many others think.

It wasn't until I got to UCLA when I learned about transplants...For the most part, everyone I knew up until college was either a native, an immigrant or arrived here before they attended school. There was no "out here" or "spread out" or other transplantspeak for me growing up. So to hear these words from others, it felt very foreign to me.

I had done some video projects back in high school, and was a frequent contributor to the Daily Bruin. I found myself doing all sorts of Los Angeles history topics or writing about current developments at the time, namely the Downtown Los Angeles skyscraper boom and the nascent Metro Rail system. I dunno, those things just fascinated me.

I had done some internships and part-time jobs at places like KCET, KCOP, the LA Weekly and even the good ol' Recycler. Working in the TV field especially exposed me to more and more transplants who were here to fulfill their showbiz dreams, and over time that shit just got to me.
Furthermore, I had an ex-girlfriend who hailed from Queens, NY and was a diehard Mets fan. Bet you can guess how that turned out!

I had thought of doing a "Militant Angeleno" ("MA" is my initials reversed) website for the longest time but work and other endeavors got in the way. Finally in June of 2007 during a period of unemployment, I suddenly felt inspired with new things happening in the Hollywood area and my home neighborhood of Los Feliz (yes, that is where the Militant Compound is located; no, I'm not giving you the exact address - I still have a right to privacy!) that I just decided to take a cue from an unspecified athletic shoe company and Just Do It. Ergo, the Militant Angeleno blog was born, and the rest is history.

So there you have it, everything you wanted to know about the Militant. He...uh, I am full aware that the mystique has worn off a bit, and part of me regrets revealing myself at long last, but on the other hand, I've probably gained some new friends (hopefully). So feel free to add me on my real-life Facebook page. I'll look forward to meeting you all in person one day.

I may no longer be anonymous, but I will always...

[April Fools, suckazz!! Thanks for reading though!]
Commandeered by Militant Angeleno @ 1:16 AM

First Bike Snob NYC and now Militant Angeleno, what a week of excitement on the internets!
Thanks for all of your LA history, it's great to read.

Hey, welcome to the "out" world. Always enjoy your stuff.

I'll admit something too. Born in,
& (partly) raised near, San Francisco.

april fool's day to you too, alfred!

Al - You're an effing genius, man! People really think this is an April Fools gag! But nice job embellishing your life story - I TOTALLY got all the inside jokes there! :) That's the LA Al I lnow, always leaving people thinking!

Not fair - the one and only April Fools Interdweeb prank I gullibly believed. To my clever credit though, I'm sure there are elements that are true in this here post! That's what I'm sticking to!

Dear Militant Angeleno,
I went to Alexandria Elementary too, before transferring to Wonderland. I'm ten years younger than you, though, so we never overlapped
Sirinya

Sirinya: Uh, you do know this post was an April Fools gag, right?

But the Militant thinks he's met you before. He won't say when or where!

Above the City said...

And I was just going to yell sellout!!!

Above The City: Wow, a week later, and people are still getting fooled! The Militant likes!

But "sellout?" Please explain. People who sell out reap some sort of financial gain for their actions. Where, praytell, is the money to be made by revealing The Militant's identity?