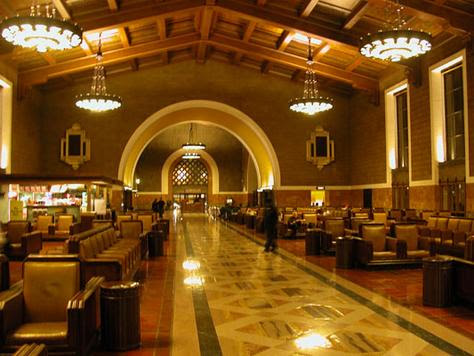 Even though these are chain establishments, the Militant nonetheless welcomes these additions to Union Station, which despite its rail renaissance is still a sorely underused facility. It would certainly prep the terminal for its inevitable role in the long-anticipated California High Speed Rail network. The Militant would love to see, at least in the near future, a weekly farmer's market in the station property's open space and the re-opening of the former Harvey House restaurant space on the southern end of the station - maybe a new location for the local Du-par's coffee shop chain?
Commandeered by Militant Angeleno @ 12:44 AM

Great News! I love Union Station, and all these upgraded amenities are overdue. The station is a visual delight, and a time machine into LA history. One could sit there for hours, just absorbing the ambiance. Peet's coffee, will help.