(More) (Street) Signs Of The Times

Apparently The Militant's post last week on Los Angeles street signs was such a hit with y'all, spawning lots of retweets and links from other blog sites (thanks, yo!), that it reinvigorated The Militant's desire to post. No, really, if you take notice of The Militant's post count from 2009 on, it seems as though there's a noticeable drop in blog entries. Part of that is due to the Militant's busy and active extramilitant lifestyle, which has him do things like...(oh wait, he can't tell you that!) But part of it was a sense that...[snif...] no one was reading his stuff anymore, so why bother? But the response from the "Signs" post made him realize that despite other sites comin' out of nowhere, tryin' to rip off his game, The Militant still has readers [snif...]

Anyways, a few of the comments from the "Signs" post asked about pre-1946 Los Angeles street signs. He doesn't have the historical background on these, but he figured it would be cool to at least show you what they looked like, so here goes. Only because The Militant loves all y'all [snif...]. Back in time we go! 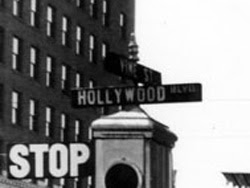 The "Plank" Sign: This was the sign that the "Shotgun" signs replaced. Incidentally, this exact sign, taken in 1947, was eventually replaced in the 1970s by the Blue Blade example from last week's post. These simple rectangular signs featured white letters on a black background, with the street type, abbreviated, shown in smaller font. No block number or direction were indicated. Apparently these became obvious collector's items -- one sign from Scott Avenue in Echo Park currently lives in someone's backyard. 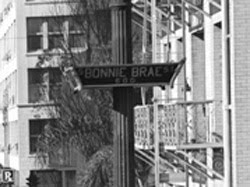 The "Four-Sided Trapezoid" Sign: This example, which may or may not have been a City standard sign, was taken in 1937 on the corner of Bonnie Brae Street and Wilshire Blvd (below the street sign was a speed limit sign indicating 20 mph...so times haven't really changed, lol) in the Westlake District. The sign was placed on a lamp post and has four sides, two of which indicate the street the sign face is parallel to. The sign had white letter on a dark (black we assume) background, and featured the street name in large all-caps typeface, street type in smaller typeface and the block number at the bottom. It was also made of wood, and is so far is the only example the Militant has seen, so it may or may not be unique to the Wilshire Blvd corridor. 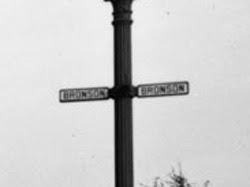 The "Paddle" Sign: Speaking of Wilshire Blvd, this sign was taken at Wilshire and Bronson Ave, circa early 1920s. They were affixed to opposite sides of a light pole and have black letters on a white background. No street type, block number or direction were indicated.


So there you go! Hope you dig it. Meanwhile, the Militant will be in search of photos (well, more likely paintings) of 19th-century street signs, and maybe even Mexican and Spanish-era signs! That would be hardcore!
Commandeered by Militant Angeleno @ 11:35 PM

Hmmm... maybe they're different after all... looks like the same idea, though, and contemporaneous

As a kid in the valley, I recall seeing a sign type that must have been immediately prior to the shotgun type. It was basically the same as the shotgun, except that the cutout on the bottom of the shotgun was on both sides of the sign, so that the block number was in the middle. Same colors and same font. The signs were affixed to a decorative wrought iron mounting on the top, and the mounting attached to the pole. There was one of these on Lankershim near Victory. Wish I'd taken a picture (or the sign!). Any story on these?

The new ones downtown? Looks like someone is trying to create some "charm" with these ye olde downtowne style signs - and failing.

Anonymous: Well the "Plank" signs were the ones before the "Shotgun" design, but those might be pre-Los Angeles street signs. North Hollywood was once its own town named Lankershim, which was annexed to the City of Los Angeles in 1927. So it might very well be that those signs you saw dated back to the pre-annexation era.

My dearest Mr. Miltant: Following up on my posting from June 17 (yeah, that's me, "anonymous"), I found a couple of examples of the shotgun with the extra "cutout" Take a look at this you tube video, the street shots of downtown in the '50s, about 30 seconds in. There are two signs -one is 4th street and the other 8th or 6th.
In any event, you'll enjoy the footage.

If it's still relevant to Fall 2012, I noted something recently. One of the last shotguns on Wilshire in Westwood, SE corner of Comstock, was replaced by a trapezoid several years ago. I noticed (September) that was gone and replaced by a blue blade. The city isn't in such bad financial shape that it has to switch signs and put old ones back up, is it?... this new blue blade, identical font as the eighties style, did, however, seem to be of a slightly darker and paler shade. Something new?

Nick: The Militant knows that the SE corner has a new condo built on it, so this sign replacement has something to do with the new construction on that corner. Bring that the new UFO signs are being placed along corridors (1st Street, Exposition, etc), this old blue blade might just be there temporarily until the rest of Wilshire or Comstock is scheduled for sign replacement. It doesn't look like they replace signs on an individual basis. If a sign got removed or damaged, the City would likely put an old sign there in the interim.

have a look on TV Liquidator signs in Los Angeles

Sorry for the late comment, but I go back to refer to this page (and its first part) frequently as I do love the old street signs (and the streetlamps as well).

In response to the comment of 6/17/2011, I found a picture of the sign that was used right before the shotgun. [I remember seeing one of these in person at Highland/Yucca in Hollywood as a kid, and I believe a couple on Olympic in the Country Club Park area.]

From the Huntington Library, I give you 1st and Broadway in 1958:

One of a Kind Design UK said...