The 5 Line: A Taste Of History In Eagle Rock 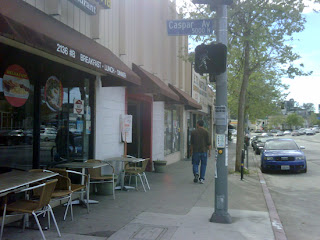 The Militant has long held the belief that Los Angeles' beauty is best discovered from a bike (rather than from a car). But five years later, he might have to change his belief.

No, this isn't his belated April Fool's post, but rather his Militant belief is more refined now...because there's even some things you'll miss from a bike.

The Militant was spending a nice Spring day walking down Colorado Boulevard in Eagle Rock on Monday, when he happened on an empty storefront near Caspar Avenue, next door to Corner Pizzeria.

The windows, covered up from inside, bore a poster of a proposed restaurant/bar's floor plan, accompanied by photos of old Los Angeles Railway Yellow Cars(!)

Naturally, The Militant took a closer look (Cautiously now, as it may or may not be a trap set forth by his enemies...)

Alas, some explanatory text in the window display revealed it all: The yet-to-be-opened restaurant is called 5 Line, a reference to the Yellow Car trolley route that ran all the way from Hawthorne to nearby Townsend Avenue and Colorado Boulevard in Eagle Rock -- the longest line in the entire Los Angeles Railway system, which ran on narrow-gauge track and in more urbanized areas than its larger cousin, the Red Cars of the Pacific Electric.

The restaurant, the window display paragraph boasts, plans to pay homage to the Yellow Car line in its theme: "The interior design of the restaurant will derive influence from the streetcar system and contain historic images of the site with the 5 Line cars."

The nearby corner of Eagle Rock (then called "Central Avenue") and Colorado boulevards had a circular station area known as "The Merry-Go-Round" which was a local hangout spot in the neighborhood (and you all thought this public space thing was a new concept in this City...). The tracks ran in the median of Eagle Rock Boulevard, which is why it's so dang wide.

The Militant doesn't know about you, but he simply can not wait until this place opens...He doesn't even care if the food tastes like crap, he just wants to experience the place! Imagine taking the trouble to theme your restaurant with a slice of local history! Only someone with militantly Angeleno leanings would want to do that (The Militant will disclose that he is neither the owner nor has any stake in this establishment, so no looking in public records to find out his identity).

One nitpick though: The artist's rendering of the facade seems to clad the eatery with the green-and- white livery of the old '50s-'60s era Los Angeles Metropolitan Transit Authority and not the classic yellow-and-green of the Los Angeles Railway, which the, you know, Yellow cars were best remembered as. But...dangit, The Militant can't wait for the future to experience history. Hurry up, Eagle Rock! The Militant is waiting to dine at the 5 Line!

Commandeered by Militant Angeleno @ 2:16 AM

Apparently there are several places in town where the old trolley tracks still exist, just buried under new pavement and those medians (such as the ones on the USC campus, that became visible when they tore up the road to re-do it ahead of the 1984 Olympics). I would love to find out if those tracks are still hiding under the median along Eagle Rock Blvd....

Janna Banana: Yes, The Militant claims to know all, or mostly all of the Yellow Car remnants in the City (I'ts one of The Militant's hobbies...)

The Militant has blogged about them before, like here: http://militantangeleno.blogspot.com/2007/09/overlooked-los-angeles-militants-crack.html but unfortunately those tracks were removed a couple years ago.

You can still find some clearly visible ones at:
- Bimini Place, just south of 1st Street
- 6th and Commonweath, along the CicLAvia route
- Monroe Street, just west of Vermont on the Los Angeles City College campus
...just to name a few!

Also, whenever the City re-paves 3rd Street between Rampart Blvd and the 110 freeway, the tracks are CLEARLY intact!

As for the Eagle Rock track on the 5 line, sadly those have all been removed from the median. Fully-exposed track like that is easy to remove, and in many cases, the track was probably recycled. The track under the streets might still remain, as it is more costly and time-consuming to remove them.