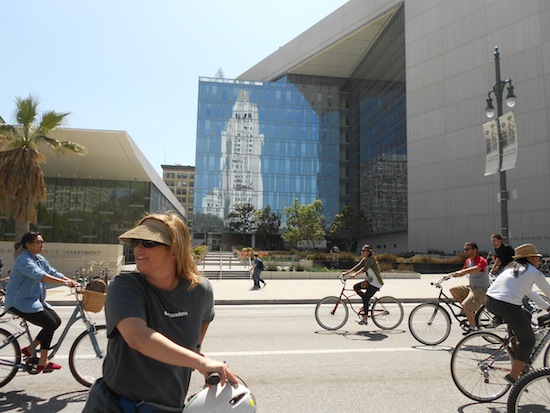 The Militant knows you've been on a CicLAvia high since Sunday, and he perfectly understands. The fourth iteration of Los Angeles' open streets event was much like the past three: Sunny, cloudless skies and smiling faces everywhere. Add to that the fact that the Dodgers and the Lakers were playing home games in their respective venues at the same time, yet there were no noticeable traffic or logistic hitches. At the end of the day, the Los Angeles Dodgers, Lakers, Kings and CicLAvians won.

This being a repeat of last October's route, The Militant decided to ride on parts of the route that he missed last time, namely the brief El Pueblo spur up Main Street. This time, it was less about discovery and more about appreciating the sights and sounds of CicLAvia. Here's what The Militant saw on Sunday:

There were even some things The Militant saw, but did not have a chance to take a picture, like a side-by-side tandem bike and a mountain bike ridden by a man with one leg (You officially have no excuse for not riding now). And even he was smiling.

And now the downside of CicLAvia: The hour between 3 and 4 p.m., when the roads gradually re-open to the cars. And therein lies the problem: Five hours is too damn short. The Militant didn't get to enjoy the ride to the south end at the African American Firefighter's Museum. He didn't even make it all the way to Hollenbeck Park. He didn't even get to chill at the 4th Street Viaduct.

There has still been talk of pedestrians complaining about cyclists complaining about pedestrians. All of this can be mitigated with a longer CicLAvia day -- people are in such a rush to ride the entire course (you know you are) that it creates problems. Let's increase CicLAvia from five to eight hours! After all, the typical workday is eight hours long. If we have to work an 8-hour day, then we must have to play an 8-hour day!

Alternately, maybe we can have a CicLAweekend, with 4-hour events on both a Saturday and Sunday. That would allow people to ride on part of the route one day, and another part on the other, or ride on one day and walk or just do other things on the other day. Instead, people are trying to cram everything into that oh-so-quick 5-hour span of bliss. Time flies when you're having fun, and during CicLAvia, it happens at light speed.

The CicLAvia route is gradually growing, with talk of expanding the route further south and east in the near future. And that's something that will inevitably happen. The Militant would rather have longer hours than a longer route. And with a longer route, how can people enjoy it in a brief, 5-hour span? That would only induce more "rushing the route" and make the course more dangerous for pedestrians and slower cyclists.

Of course, as the saying goes, freedom (from cars) isn't free. It costs hundreds of thousands of duckets to make CicLAvia a reality (which is why the proposed July CicLAvia has been nixed again this year). So why not text the word SMILE to 85944 to donate $10 to CicLAvia?

See you or not see you on October 14!
Commandeered by Militant Angeleno @ 2:13 PM

Thanks for the great account of CicLAvia, Militant Angeleno! I agree that longer hours for the event would be even better than a longer route. We couldn't make it this year due to scheduling issues + the fact that we live almost 1 hour away from the CicLAvia route, making it a big trip for our litte ones.

Would LOVE for CicLAvia to be 8 hours long, as you suggested!
--HFC

Why single out cosplay for the thumbs down and gush over every other aspect of Cic? *hurt*

One insider's perspective on extended hours: (from Joe Linton, one of the organizers, and in a little bit cranky mood this year)

Personally, I'd love an 8-hour event, goodness, I'd love 24/7 car-free streets...but there are two reasons that I am lukewarm on extended hours in the near future.

A 5-hour event can be covered by one city worker 8-hour shift. Expanding from 5 hours to 8 hours means two city worker shifts (and/or big overtime), hence roughly double the cost. As an event organizer, for double the cost, I'd rather do two CicLAvia events.

Secondly: We also depend on residents, businesses, churches, etc. to support the event - at 5 hours it's an inconvenience, at 8 hours they may get pissed off and we can find ourselves with a backlash against CicLAvia. I think it's important to strike a balance between giving CicLAvia participants a great event, and not screwing up the day for everyone else not at the event.

So... I know it's coming from a place of I LOVE CICLAVIA... but be careful what you ask for - on a street where other folks live and work.

(One other thing that I can rant on this. I am not that into folks who roll in at 1:15pm, then get frustrated that they don't have enough time... well... set that alarm clock, git yer but to CicLAvia on time or early... the city starts closing streets between 7am and 8am...)

I didn't get a chance to go out this year, but didn't enjoy myself too much last year when I was out there on foot. I mainly stuck to the sidewalks because the streets were filled with cyclists. I can do that any other day. I'm fine with paying to use the streets free of cars for my hobby (hello, marathons and half marathons). I wonder how many people out at CicLAvia actually donate?

I've been to every CicLAvia at the very start of each day (by 10:15) and this weekend, having adopted the 1st/Main intersection, was onsite at 8:45. I can tell you without doubt that CicLAvia's population grows exponentially throughout the day, staying fairly sparse through 11am then skyrocketing with more and more people arriving without tapering off until the streets reopen. At 2pm there was a ton of new riders showing up. At 3pm, as streets began to reopen and the crowd began to thin there were STILL new riders showing up (1 group who had just arrived asked me for directions to Hollenbeck Park at 3:00pm and were upset when i told them the streets would almost certainly be open there and will be opening ahead of them on their ride back downtown as well).
90% of people who want CicLAvia to be longer could make it that way simply by showing up earlier.
90% of the people who want to ride the route fast could do so by showing up at the beginning of the day. At 10am you could ride full speed from end to end without hitting a single slow down (other than car intersections). Or hell, get out there at 9am. I saw a total of about 4 bikes ride past 1st/Main from 8:45-9:45. If you're a speed demon, get out there then. We're not talking about the crack of dawn here; hitting the bike at 9am isn't that hard.
If there were no tradeoffs, I'd love an 8hr CicLAvia, too. But I wholeheartedly agree with Joe. If it's a matter of doubling cost, it's more effective to have 5hr CicLAvias 4x per year than 8hr CicLAvia's 2x per year. More events should be our goal. Better community integration should be our goal. Longer isn't really necessary.