Right On Target: The Militant Takes On City Target in DTLA 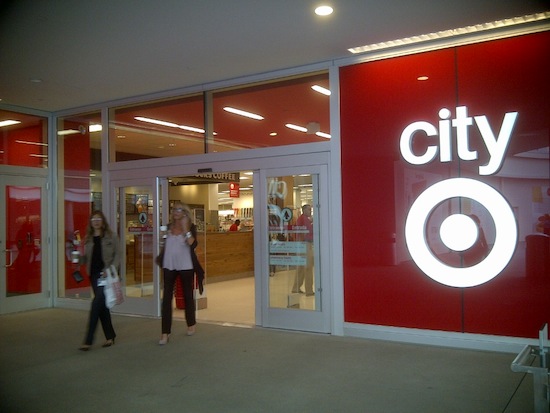 Back in the day, a Target store was considered an only-in-the-suburbs phenomenon, usually anchoring a big-ass parking lot lined by palm trees, and accompanied by a Lowe's, with an Outback Steakhouse, a Chick Fil-A and a Claim Jumper thrown in for good measure. Bonus points if it has a Hometown Buffet (though in that case, substitute the Target with a Wal-Mart).

Now, not only has the world changed, but our metropolitan area has changed. We actually have a Downtown now, and people are actually living in it (including a few of you readers). Five years ago, you Downtown Folk got a Ralphs supermarket, which was like a massively groundbreaking moment, remember? The seas parted, the earth shook and you could just walk down the street for some groceries.

The Target department store chain eventually wised up to all this and opened up a City Target store in Downtown last week. Slightly smaller, yet featuring much of the same stuff you'll find at a suburban Target (sans lawn/porch-related items).

The Militant went to take a gander at this new phenomenon, and bought some stuff too.

Yes, it looks pretty much indistinguishable from any other Target store, except it's so damn clean and orderly (it's a new store, duh). There was a section near the entrance called "City Love" that sold Los Angeles (and not "LA" in fact) t-shirts, mugs, refrigerator magnets and other trinkets. From a Militant perspective it was...interesting, but overall a nice effort on the civic pride front. Of course, the Fontana Target won't have any "Fontana" t-shirts.

The grocery section was smaller, yet no less complete. Hey yo Downtowners, another supermarket for y'allz! Sure it's no Trader Joe's, but it's gonna have to do for now, huh?

The Militant ended up buying some cheap shades, because he was fearing he was being recognized lately.

When he was done, he got a nice, friendly, upbeat-yet-not-too-forced-and-hokey attitude from the redshirts (i.e. Target employees). Let's see how long that lasts, but they seemed aite.

One thing, though, that was not alright was...the lack of bicycle parking.  Grrrr.

Dude, this is Downtown. CicLAfreakingvia happened right outside its doors two weekends ago.

The Militant didn't need to park his bike here since he rode the Metro, and City Target is right across the street from the 7th/Metro Center (M) Red/Purple/Blue/Expo station. But he's sure others would need to. One cyclist just used a "Passenger Loading Only" sign (pictured above) as a locking post, which is technically illegal, (yet never enforced). But let this be a Militant appeal to the City Target folks: The Militant knows you're trying your best to fit in the center of the City. Being transit-accessible, that's awesomesauce, and The Militant salutes you folks for that alone, But...them bikes are here to stay, so please City Target, It's not too late to add a few bike racks right near the front entrance!
Commandeered by Militant Angeleno @ 4:45 AM

Anyone can request a bike rack to be installed on LA City streets. LADOT has this handy online request form:

They will contact the property owner/leasor about installing a bike rack. They have to agree, so a email to Target is in order also. This will et things rolling - takes a month of two, but there's no cost to the location. If you can get Target to put in a rack on there own, that's better. Hopefully, they will check with somneone like LADOT to make sure it's installed in a bike freindly way, and not against a wall, not down an alley behind the store, and not a locked door.

LADOT has installed a couple of hundered racks due to these requests. Get one for your favorite spot!

PS - Santa Monica Planning Dept takes email requests too.
PPS Beverly Hills needs some requests and someday they might install another rack to match the one (1) at the library.
PPPS - Dunno about other cities, but a letter to a Planning Dept might start something.

There's a City Target in Westwood too. I think it opened a couple of weeks ago. I still haven't visited.

There is a bike rack, kind of hidden, down the sidewalk to the south a little bit of the entrance. But it's one of those horribly designed racks that only allow you to lock one of your wheels if you have a u lock. I tried to lock my bike to one of the stair railings and the security officer said I couldn't. He recommended that I lock it to one of the taxi poles (bike could easily be stolen by just popping that top sign part off) or that there was bike parking on the top floor (7th or 8th) of the parking structure on the other side of the block.

Who thinks of these things?

It's similar to the ridiculous bike parking at Dodger stadium where the only bike parking is at the very top of the stadium. So even if you have good, lower level seats, you still have to climb way the ass up there and then walk down ten stories to get to your seats!

At least the City Target in Westwood has a bike rack in front. Which is better than most blocks in Westwood.

The one huge disappointment about City Target in Westwood is that there is a Starbucks inside, but no Target snack bar...so no Icees!

Thank you for Nice information.

"We actually have a Downtown now".

...We've always had a Downtown. You, of all people, should know that Militant.

It's similar to the ridiculous bike parking at Dodger stadium where the only bike parking is at the very top of the stadium. Loading System

I wish we had Target in Ireland.

I was watching a documentary on CNBC Europe about it the other day. Very interesting how it was created by Daytons of Minnesota.

BTW, I'm having a giveaway on my blog for St Patrick's Day. You or some of your readers may want to swing by and have a lookhttp://renovatinglpa.blogspot.ie/2013/02/competition-time.html

So is the militant going to do a new report when the new whole foods opens up?