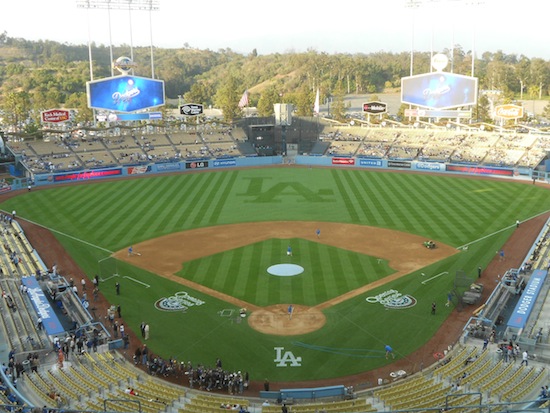 The Militant, normally having faithfully attended Dodgers Opening Day for the past five years, was unable to attend this year for unspecified reasons. But he was able to attend Opening Night on Tuesday  to partake in the new $100 million additions to The Stadium, as well as to check out the MLB debut of South Korean pitching phenom Hyun-Jin Ryu.

56,000 enjoyed the previous day's 4-0 victory by Clayton Kershaw against the entire Frisco Giants team and the new venue amenities. So much, that no one caused any trouble. So clearly the 2011 Bryan Stow incident was Frank McC*urt's fault.

The Militant first wanted to check out the new Dodger Stadium Express Lanes (No, not the ExpressLanes, although in the future Metro may or may not want to charge solo drivers a toll for driving along the temporarily coned-off lane along Sunset Boulevard and Elysian Park Avenue from Figueroa to  Stadium Way). The ride, which normally takes about 35 minutes (and as much as 47 minutes to nearly an hour for sellout games) was clocked at an even 19 minutes from the time the bus started moving at Union Station to the time the doors opened behind the pavilions. The lane definitely made a difference, though if it started at Alameda instead of just Figueroa, it would rock even more awesome.

The most obvious difference between the new Guggenheim-owned Dodger Stadium and the McC*urt-era ballpark is how it's presented: Where the McC*urt Dodger Stadium used player branding as a draw and a marketing mechanism - from Eric Gagne's "Game Over" icon to past and present player banners hung around the stadium to Mannywood (and the associated dreadlock wigs), the new Guggenheim look for the stadium sells the name in front of the uniforms, rather than the back. Drawing heavily from the retro early-'60s aesthetic, the images are varied, but the look is somehow uniform: From the choice of fonts on concession stand menus, to the oversized team iconography intended for photo opportunities (if you remember Universal Studios before the 1990s, you'll know what The Militant is talking about), to the jolly-looking bobblehead boys statues, the place is no longer just a baseball venue, but a Dodger fan fantasy land. Picture Willy Wonka with the voice of Vin Scully and the look of Tommy Lasorda, and we're basically in his factory. And The Militant just loves it.

Perhaps the greatest acquisition from this offseason was not Ryu or even Zach Greinke, but the new high-definition video screens. Originally planned by the McC*urts to be installed in the 2008-09 offseason, it was held off due to logistics surrounding being the host venue for the World Baseball Classic finals taking place that Spring, and the proverbial shit hitting the fan in the 2009-10 offseason.

The new outfield screens are awesome, It's like you just bought a new computer with dual monitors.

The  new screens return a symmetry not seen since 1980 when the rectangular Mitsubishi Diamond Vision display replaced the original 1962 left field pavilion hexagonal scoreboard screen. Ironically, the Diamond Vision, hailed as a technological advancement in its inception, was now considered antiquated, and was the main reason for the screens' replacement. Its right field pavilion partner, lighting up in monochromatic amber since '62, was also replaced with a matching HD screen.

The result is freaking amazing. The images are sharp and tasty, and don't look weird when you take a picture or video of them. Moreover, they display a crapload of info and images (Text such as the "Dodgers Welcome..." announcements and the lyrics to "Take Me Out To The Ballgame" are now shown on the long rectangular screens below the large hexagonal ones, though both sets can each function as one large screen.

Much has been discussed about the new restrooms and the removal of the 1960s-era water trough urinals in favor of a slightly more private, and more efficient waterless urinal. The Militant did, um, inaugurate one of them, but was ultimately more fascinated by how dang bright the place is now, a stirring upgrade over the dimly-lit dungeons we had previous. For those who missed the trough experience, it's recreated in the new communal sinks, which offer nice, hot water. And you won't feel awkward when you see someone else's hands.

The main food stands have a neat early '60s retro look to them, especially on the menus, and The Militant is glad to report that they now all uniformly stock grilled Dodger Dogs (Kirk Gibson fist pump), or at least boiled Dodger Dogs with grill marks painted on them (kidding). The Militant was a little disappointed when his garlic fries had very little in the way of garlic bits and grease. What up with that?! Unfortunately, service was still at a molasses-like slowness. The clerk who served The Militant was looking all over the stand in search of an All-Beef Dodger Dog, which not only took 3 minutes, but she eventually found one in the drawer next to her. The Militant thinks Mark Walter & Co should make sure the food services staff drink enough coffee before starting their shifts.

New to the formerly vast empty spaces outside the Reserve sections are the kids' play areas, presented by Children's Hospital Los Angeles, all of which resemble playground versions of baseball diamonds, yet are designed in a way where the little tykes seem to have a visceral attraction to them. They all have that squishy rubbery ground surface you find in modern playgrounds. The Militant sort of wishes he were Lil'Mil again and could jump around on these things.

The Bobblehead Boys and Team Icons

In a city where tourists take pride in photo ops by stars on the sidewalk, a sign on a mountain, or costumed movie or cartoon characters (official or not), there seemed to be not much of that at our own baseball stadium, the largest in terms of capacity in the entire MLB, and the second-oldest in the National League. That's changed now.

The most visible items are the 10-foot tall "Bobblehead Boys" statues, which don't represent any players in particular, but are modeled after the old-school 1960 papier-mache MLB bobble head dolls with the same face, but different uniform, specific to each team. Not only are they a nod to nostalgia, they're also informative: Each statue sports a different variation of the home and road uniform worn throughout the years, and for a diverse city like Los Angeles, each of them comes in a different skin color. Best of all, they're actual functioning bobbleheads!


The Militant thinks The Dodgers should give each of them a name, and make them actual giveaway bobblehead dolls. Though, when we win our next World Series, some fools gonna be tearin' their heads off!

The stadium also has oversized team iconography, from the "LA" logo, to retired numbers, to baseballs autographed by the team's Cy Young Award winners (Kershaw's and Koufax's were the most popular, while Eric Gagne's just stood there alone in the corner...'Game Over' indeed).

The Stadium now boasts free Wi-Fi and boosted cellular coverage. Previously, a cell tower on a hill, disguised as a palm tree, in nearby Elysian Park carried the stadium's signals. For most games, though, an over-abundance of mobile phones overwhelmed it and most people went blank as far as using their smartphones. Not good if you're trying to text your friends, or Tweet/Facebook/Instagram the game, or look up baseball stats on your iPad. The Militant was unable to log on to the open Wi-Fi connection in the Stadium with his unspecified smartphone, but cell coverage was consistent - he was easily able to Tweet during the game! The last time was able to do that was during the 2011 "McC*rt Boycott" season (Heh heh).

Of course there are even more improvements: The "batter's eye" black screen behind center field was enlarged, which is cool since it blocks more of the parking lot and should help chip away the misconception that only Los Angeles fans arrive late and leave early (which is scientifically proven to happen at most every sports venue, though Dodger Stadium is the only one with the parking lot in plain view). And of course there's the expanded clubhouses, which you won't be able to see unless you take an official Stadium tour, or are a player or member of the media.

Aside from the Dodgers losing 3-0, the not-so-garlicy garlic fries and the fact that the Cool-A-Coo guy never came to The Militant's aisle :( , it was a memorable Opening Night and a great start to the season with the new ownership. You can feel it in the air -- more people are staying to the end of the game, and the "LET'S GO DODGERS!" chants are noticeably louder now.

Go Blue, all the mf'ing way!


Commandeered by Militant Angeleno @ 2:21 AM

This makes me want to return to my happy place. I had no idea they added the playground or those life-sized bobbleheads. They look sorta like Bob's Big Boy.