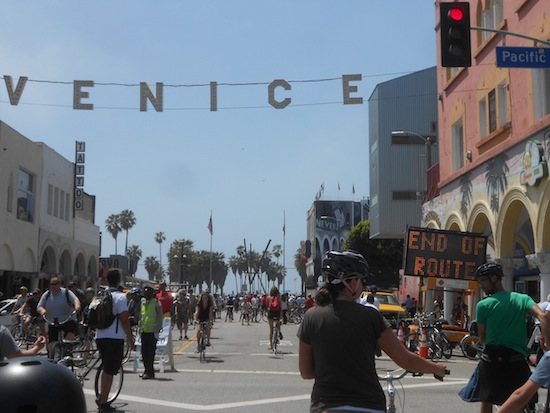 Two and a half years since the advent of Los Angeles' own ciclovia event, we have the longest CicLAvia route to date at a length of 16 miles, from El Pueblo to la playa, and going as far west as it can go, to the iconic Angeleno seaside playground known as Venice Beach, just yards from the famed boardwalk. The planners call it "CicLAvia to the Sea." The Militant will skip the redundant syllables and come up with his own portmanteau: Sea-cLAvia.

The Militant was there, and has yet to miss a CicLAvia (and plans never to do so, unless they make this a daily event), so he got on his chromoly steed and rode westward.

Had it really been that long since his the last CicLAvia in October - half a year ago? CicLAvia season has now begun, and Angelenos have officially sprung back into life.

True to CicLAvia fashion, there was nary a cloud in the sky (except at the beach, which burned off eventually), the temperature somewhere between 74 and 80 degrees, zero arrests (compared to 171 out in Coachella) and hundreds of thousands of smiling faces.

The severely undercounted estimate of 100,000 participants (which is a hard figure to quantify with any precision whatsoever) had to have been surpassed, as the past 3 or 4 have already broken the 100K mark. The Militant's estimate is some 225,000 people for CicLAvia VI.

Because the event lasts an all-too-short five hours -- a major pet peeve of The Militant since CicLAvia began -- He skipped the Downtown-to-Westlake segment and headed for the goods.

He passed by several of his listed points of interest in his Epic Militant CicLAvia Tour 4,0 post, and even had some nice chats with fellow riders, even educating one on where the Expo Line was headed to in three years (he knew there was construction in Santa Monica, but for some reason didn't put two and two together...). He saw a family bang on percussion instruments from their balcony on Venice Blvd to the delight of cyclists, Brazilian capoeira on Venice, Hare Krishnas singing, DJs spinning, and even rode along with the mayor, as well as a likely future mayor.

The biggest complaint shared by most was the traffic bottlenecks west of Culver City. Yep, even without cars, the Westside still has the worst traffic in town, and CicLAvia was proof. Most of it had to do with the fact that the eastbound lanes of most of Venice Blvd were still open to normal auto traffic, while both directions of the CicLAvia flow had to share the westbound lanes.
But CicLAvia being a work in progress, expect to not experience that next time we have see a Sea-cLAvia route.

The Metro Expo Line, of which its current western terminus in Culver City was one of three directly located along the route was put to the test on Sunday, not just ferrying CicLAvians and their bikes, but transporting literature fans to and from the Los Angeles Times Festival of Books at USC. A number of operatives have also reported to The Militant that trains were still handling CicLAvians even several hours after the streets had let cars back in.

And of course, there's the whole time issue. Again folks, an eight-hour CicLavia. It's totally possible.

The next CicLavia route on June 23rd will be along Wilshire Blvd, expected to run from Grand Avenue in DTLA to Fairfax Avenue, just outside of LACMA. If that indeed will be the route, it will be 6 miles long -- the shortest route ever (CicLAvia started at 7 miles). They should continue the route either north along Fairfax to Sunset Blvd (imagine passing by Farmer's Market, Canter's and Oki-Dog), or head south along Fairfax through Little Ethiopia and onto La Cienega to the Expo Line station for a way to transport people in and out of the area. We'll also get a third this year on October 6, which may or may not be the classic CicLAvia route seen in the first three runs.

Speaking of future CicLAvias, rumor has it from operative reports that there will likely be four CicLAvias next year, working towards 5-6 scheduled through the year, perhaps every other month (leaving out December and January as the off-season). Yes sir, may we have another?

I went out for a little while in the morning, but mainly stayed home in Palms north of Venice.

I heard there were fewer non-cyclists out this time. I know the only time I've participated I ended spending most of my time on the sidewalk since running along a street crowded with cyclists didn't feel too safe.