'Take Me Out' To A Los Angeles Tradition

It's a wonderful time to be a Dodgers fan. As of July 22, the team entered sole possession of first place in the NL West, just 22 days after being in last place. Yes, just 22 days from "suck" to "success," thanks to The Puig, Hanleywood, a more consistent rotation, a more improved pen, keeping Brandon League away from save situations and overall better health. Enjoy this one:

While The Militant was watching Sunday's game where The Boys In Blue swept the Washington Nationals, announcer Steve Lyons (yeah, we know...) made a comment about baseball's 7th Inning Stretch, how it may or may not have been originated by president William Howard Taft during the Washington Senators' Opening Day game in 1910 where the famously portly Commander-In-Chief stood up in the middle of the 7th and took a stretch to relieve the fatigue of sitting in a seat that was too small for him. The other spectators, seeing this, stood up along with the prez, and a tradition was born.

The other tidbit uttered by the unfortunately non-Vin Scully broadcasters was that the baseball anthem, "Take Me Out To The Ball Game" was first played at a baseball game in Los Angeles during a high school match in 1934.

"I find that hard to believe," quipped Lyons, fueling fire to the stereotype that Los Angeles was pretty much an empty desert until East Coast transplants arrived here, circa 1998 or so.

The story behind the song goes like this: It was written back in 1908 by Tin Pan Alley songwriters Jack Norworth (lyrics) and Albert Von Tilzer (music). Norworth was riding the subway in NYC (then brand-spanking new, only in existence for four years) when he saw an advertisement that read, "Baseball Today - Polo Grounds." The song was written with the songwriters having never been to a baseball game before (and hadn't even done so until over 20 years after the song was written).

And did you know the song as we sing it at Dodger Stadium, and at other stadia, is not the whole song? You're only singing the chorus part of the song! Here's the complete song, verses included, for y'allz:

The song was popular back in the days before records or even radio. People bought the sheet music and played and sang it themselves. It was also a popular pastime song in movie theaters - The audience sang it while the guy in the projector booth changed the film reels. But it would be some 26 years before it would be played at an actual baseball game, mainly because public address systems didn't exist until 1929.

Rick Astley's "Never Gonna Give You Up" (now known as an Internet meme) is a song that came out 26 years ago, just to give you some perspective.

Several historical accounts mention "Take Me Out..." as having been first played at a high school baseball game in Los Angeles before being played at the World Series in St. Louis later that year.

It would be pretty awesomesauce if a certain high school's sports program took credit for it and literally ran the bases with it. Imagine having that distinction. Of course, Los Angeles schools don't care a thing about preserving their own histories, since teaching local history is banned in the LAUSD (assuming it was an LAUSD school). One account lists it as a "prep school" (which would likely make it a private school) and this page says it was first played "before the first game of the Los Angeles high school baseball season." 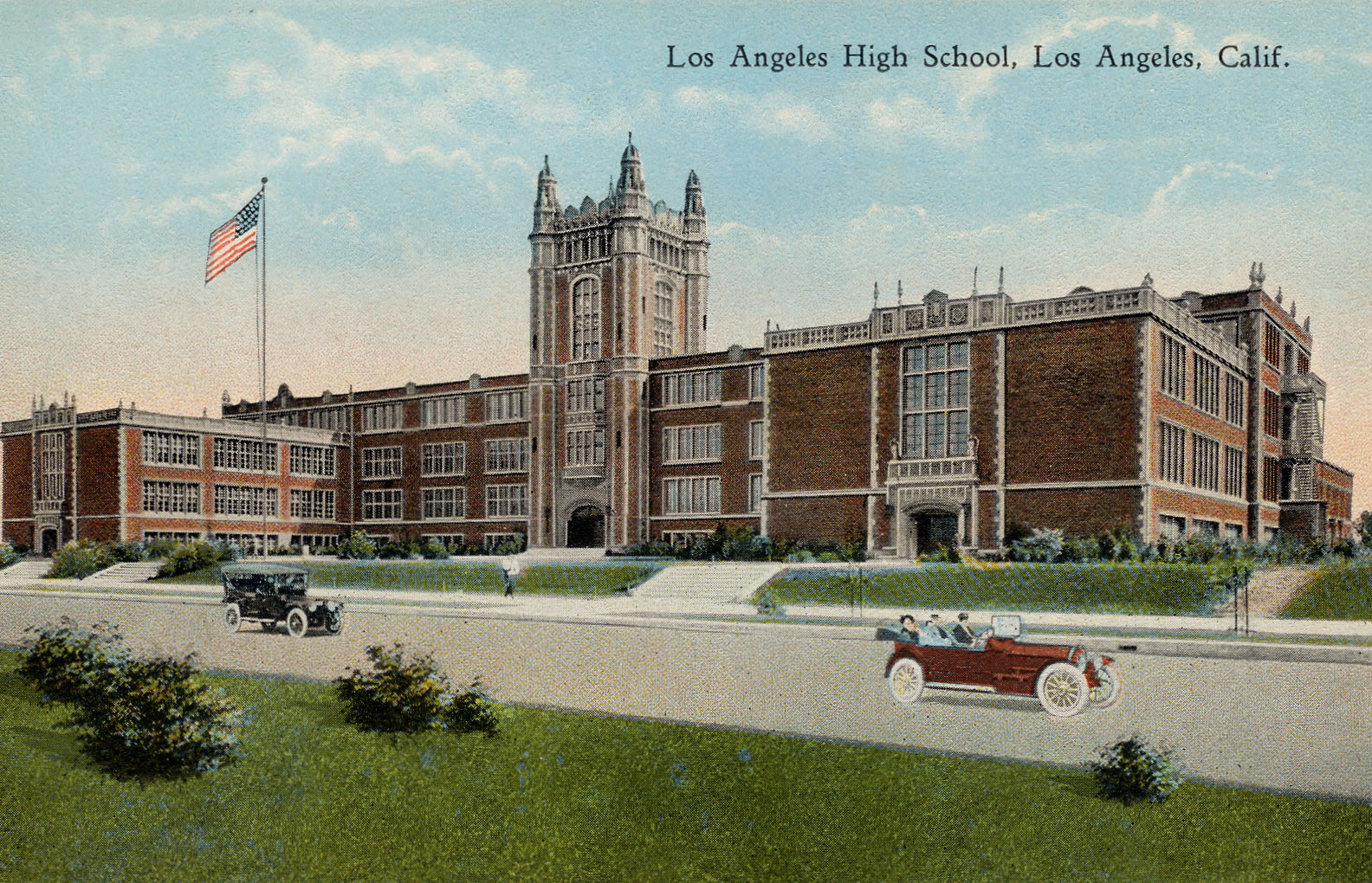 Well, there is a high school called "Los Angeles High School" which was founded in 1872 at Temple and Broadway in Downtown, moved to Fort Moore Hill in 1891 (right at pretty much the site of today's Ramon C. Cortines School of Visual and Performing Arts) and moved to its current Olympic Blvd location in 1917. It once had an ornate gothic edifice (pictured left) which was damaged in the 1971 Sylmar earthquake and destroyed by an unrelated, though mysterious, fire later that year. Today's ugly-ass penitentiaryesque '70s-era school building is what replaced a beauty of a campus.

Interestingly, Los Angeles High does boast baseball-related alumni such as former Brooklyn Dodger Mel Almada, who in 1933, became the first Mexican American to play in the major leagues as a member of the Boston Red Sox. Other players include former NY Giants catcher Harry Danning and former Yankees outfielder Bob Meusel.

But perhaps the greatest Los Angeles High alum to make an impact on baseball was not a player, but a young woman named Rosalind Weiner who was eventually elected to the Los Angeles City Council in 1953 and became the driving force in City Hall in bringing the Brooklyn Dodgers to their new home in Los Angeles.

Sounds like the stars were aligned for that one. So, unless any other school wants to take credit for it, you Los Angeles High Romans might want to steal this historical base.

"Take Me Out To The Ball Game" is a tradition of America's national pastime, performed over the years at the old Wrigley Field, at Gilmore Stadium, at the Los Angeles Memorial Coliseum, at Dodger Stadium, at Anaheim Stadium if you wanna count that, at Dedaux Field, at Jackie Robinson Stadium and at countless high school fields all over town where countless major league players once played. But one of them, whichever it is, was the originator.

If anyone out there has any solid leads on the exact high school that originated "Take Me Out To The Ballgame" in 1934, please contact The Militant [militantangeleno at gmail dot com] immediately.

Commandeered by Militant Angeleno @ 1:18 AM

Man, I couldn't believe the former Bums of Brooklyn came back & beat Toronto last night, but they did.

I'd about given up on the season last month. Fair weather fan.