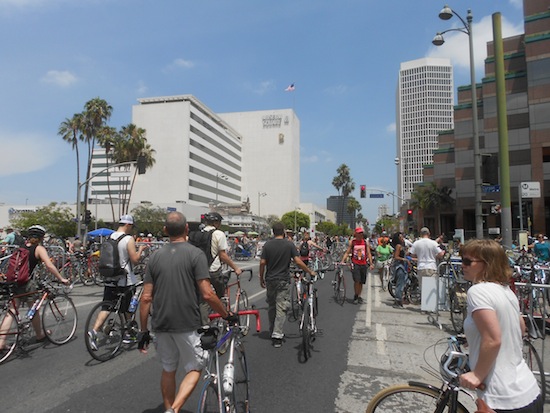 When The Militant first heard that there would be another CicLAvia added between the April and October editions, he was stoked. Then when he found out the route was a simple 6-mile stretch of Wilshire, he was bummed. But then when it was revealed that the event's hours were finally extended to 9 a.m. to 4 p.m., he was stoked again.

The six-mile course was the shortest to date and the first one to not incorporate any parts of previous routes. Billed as "Iconic Wilshire Boulevard," The Militant couldn't help but read that as "Ironic Wilshire Boulevard." No, not because of all the hipsters blasting Daft Punk's Random Access Memories album on their iPod boom boxes, but because Wilshire was, for all intents and purposes, a road developed for the car. H. Gaylord Wilshire donated his land along the former Orange Street on the condition that it not have streetcars or commercial trucks run along the thoroughfare. And when developer A.W. Ross pulled a Miracle some three decades later, the stores were built to autocentric scale. So how ironic, yet how appropriate, to have the street closed to cars and open to human-powered transport.

The six-mile course wasn't actually that bad. Though it lacked the sense of adventure and accomplishment of April's Sea-cLAvia, it was short and sweet enough to enjoy multiple times over if one wished. At no point did The Militant feel the need to rush the route (whereas he always did before).  There were shops, green space and historical wonders galore. There was almost something for everyone - yoga, zumba and KBBQ. And it was also quite walkable. The Militant probably walked almost two miles of the route (of course, with the large dismount areas at the ends, everyone walked 1/6 of the route).

Since two months fly by just like that, here we are...and there it went. Time flies when you're having fun, and despite the longer CicLAvia hours, the final CicLAvia of the Villaraigosa administration still went by all too quickly. Still, the two additional hours were much MUCH appreciated since The Militant was not only able to ride the entire course and back, but was able to chill out along the route. One downside though, was the lack of the 30-minute or so grace period after the official end of CicLAvia's hours, that grey area where cars aren't sure whether they should be back on the road yet, so, at least for part of the route, CicLAvia goes on extended play.
Not so this time. In fact, it was 3:55 p.m. when LAPD cruisers and City vehicles sweeped through Wilshire telling cars, in a stoic loudspeaker voice to "move to the right." So while CicLAvia might have gained two hours on paper, in reality, because there was never anyone keeping us off the route before the start time anyway, we really only gained half an hour.

How about CicLAvia follow this formula: One hour per mile, plus one, equals the appropriate length in hours of a CicLAvia event? Sunday's route was 6 miles, plus one equals the 9 a.m. to 4 p.m. span of the event. Perfect. Ergo, this just means that the 16-mile "To The Sea" route via Venice Boulevard will have to be 17 hours long next year [wide grin].

This being the first CicLAvia to experience June Gloom, Sunday's seventh iteration of CicLAvia may or may not have broken the streak of cloudless CicLAvia days, but as the afternoon wore on, the sun shone through the rest of the day. Never fails. The Despicable Me 2 blimp also never failed to stalk us.

Of course, one asshole (most likely talking on their cellphone like all motorists do) decided to stage an AutoLAvia for a few yards and strike and injure a cyclist. Unfortunately, The Asshole In The Car got away. If such a thing happens again at CicLAvia, The Militant hopes all you CicLAvians mob together en masse, force them to stop, force the asshole out from their car, dangle a noose from the nearest tree and proceed with the lynching, wild west style.

That aside, why don't we ask some experts what they thought of Sunday's CicLAvia? Thanks to a couple of his San Dimas-based operatives, The Militant was able to obtain a phone booth and travel back in time to gather some of the most influential white males in the history of Wilshire Boulevard! Joining us in our panel of experts (If you read the recent Epic CicLAvia Tour post, these names should be familiar to you by now...) is developer and Great Depression-era Miracle Mile founder, A.W. Ross; late 19th-century real estate magnate George Shatto and last, but certainly not least turn of the 20th century land developer, publisher and failed politician H. Gaylord Wishire.

MA: Gentlemen, thank you for being here.

MA: The Militant's face is irrelevant to the topic. What did you think of Sunday's CicLAvia?

Gaylord Wishire: It was delightful to see so many bicycles on my street. They come in so many colors. Just like the people riding them. But I was much bothered by the trucks parked along the road. I specifically told the city, no trucks allowed on my street.

GW: Food trucks? Where are they delivering them to?

MA: They're not delivering food, they're selling food.

A.W. Ross: Food-selling trucks? Why, that's just nifty! I oughtta try that sometime on The Mile!

MA: No, don't do that, you'll mess up the space-time contin...oh never mind.

GW: Ross, was it you who erected these horrid capitalist edifices on my street?

AWR: Why, I oughtta pound you!

MA: Well, it's now a hospital. They demolished your house after you die...err...uhh...feeling awkward right now.

GS: What is the "telephone," exactly?

MA: Never mind. Hey, did you know a bowling alley was named after you?

MA: Back on topic...Mr. Ross, what were your impressions of CicLAvia?

AWR: What happened to all the cars?

MA: Well, CicLAvia is a day where we close off the streets to cars.

AWR: Now why in tarnation's name would you ever want to do that?

MA: Well, because there's too many cars on the streets these days.

AWR: And that's a swell thing!

MA: No, because we have congestion and air pollution now.

GW: What does he know? That Ross is nothing but capitalist swine.

GW: Do you want to settle this in fisticuffs?

GS: Is anyone interested in investing in some Santa Catalina Island property?

[Ross and Wilshire engage in a fistfight]

[The three panel guests were quickly escorted back into the phone booth time machine. Huh? "Station?" Who said that?]