So yeah, The Militant is a sucker for epic things in Los Angeles: Epic sunsets, epic space shuttle parades, epic CicLAvia tours, you know the deal. Naturally, when he found out earlier in the week that Asics America would be sponsoring a special by-the-mile illumination of the 2015 Los Angeles Marathon route on Friday night to celebrate its 30th Anniversary, he was down like James Brown for this, and even almost forgave Fr*nk McC**rt for running the Marathon (...almost).

We haven't seen anything quite like this. Not even for New Year's Eve, not even for the '84 Olympics. So this was pretty epic indeed.

The Militant instinctively knew that the usual vantage points -- Griffith Observatory, Runyon Canyon, the Getty Center, etc. would be crowded as hell, not to mention the usual parking snafus you'd expect from such a gathering. So being near the Crenshaw area at the time, he made a dash to the Baldwin Hills Scenic Overlook...where a Culver City police car was blocking the entrance.

Okay then. Plan B. Head to the Metro Expo Line's La Cienega park & ride station, and view the lights from the roof of the parking garage. So here goes: 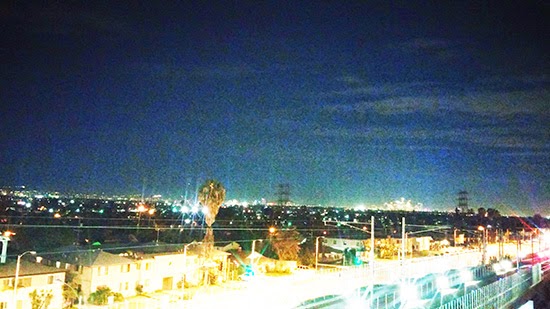 Okay, that was subtle. It didn't quite look like this: But we sure fell for it, huh? Actually, the rendering looks like each block was being illuminated, rather than each mile, and the actual time the lights went on was an hour or so after dusk.

But if he looked real hard, he could make out the lights, shooting up straight into the partly-cloudy nighttime summer winter sky. It just didn't turn out so well on his Militant Spyphone.

He wanted to see these lights up close so he headed east on the 10 towards Downtown, and made his way though Sunset Boulevard in Echo Park. The next light column was at Sunset and Silver Lake Boulevard, easily visible along the road ahead: 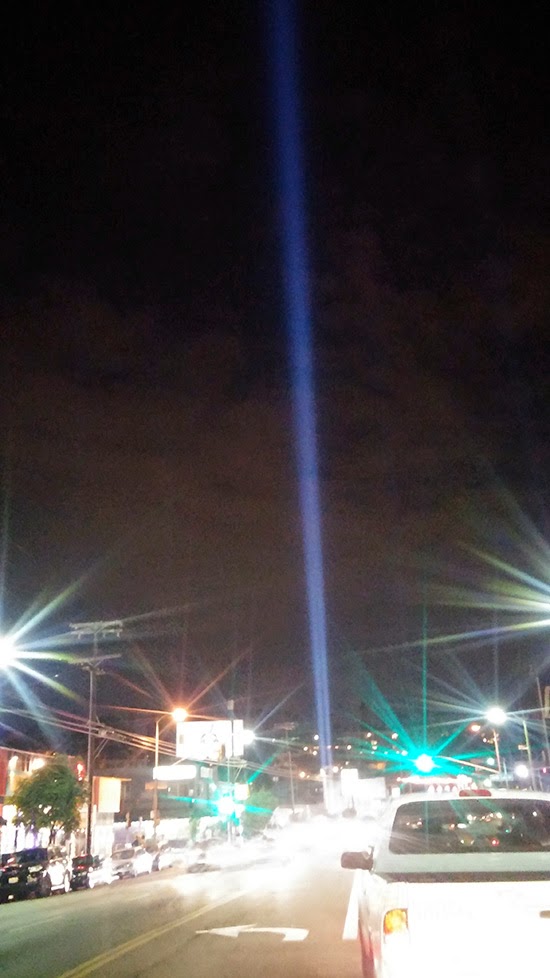 It wasn't a single Klieg light, but a quartet of Syncrolite SXL 7,000-watt Xenon skylight fixtures at each mile marker, plus the start and end of the Marathon route.

The Militant headed west along Sunset and then Hollywood Boulevard, but was shocked to find the nearest light turned off. He asked the attendant what was up, and he told The Militant, "They're doing something..."

But a few patient minutes later, four blue-white columns of light beamed up from atop the rented Enterprise flatbed truck, several thousand feet into the sky, where spots of light dotted the sky like an impromptu constellation above the City of Angels. The lights were so bright from the ground that dust and flying insects were automatically illuminated directly above the truck. The Militant was solo tempted to make shadow puppets.

It was incidental macro-sized public art (eat your heart out, Christo). Though it wasn't as impressive as the rendering -- admittedly more light into an already light-polluted environment isn't really going to be that outstanding -- it held a beauty on its own. You can trace the Marathon route in the sky, somewhat. From a distance, you can see what a mile looks like. For those who were attracted to the lights, it was a moment of community, of a shared experience, of beauty. 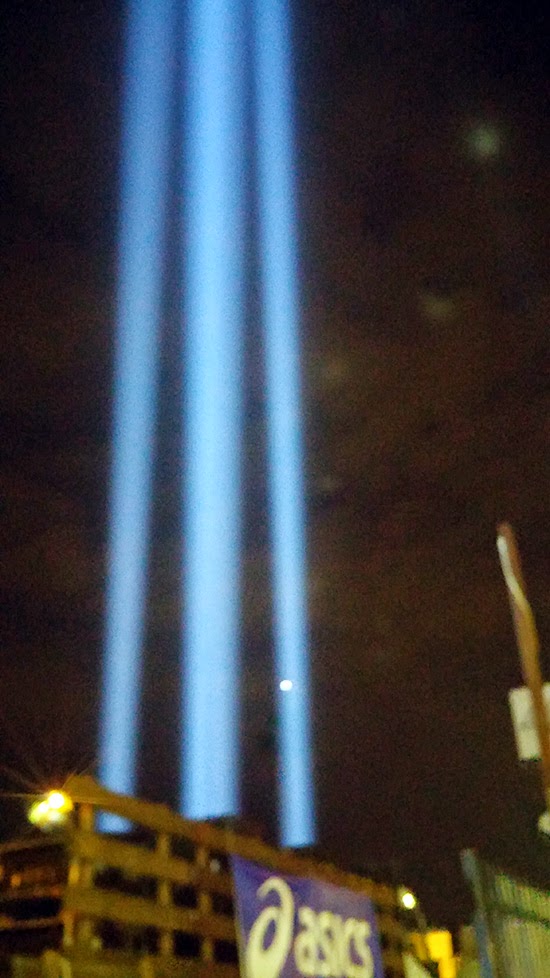 It might be cool to do this again. Maybe with brighter LEDs. Maybe with a more sustainable means of power than 27 diesel power generators. Maybe Metro can do this on the night of July 14 with light columns emanating from all 80 Metro Rail stations to celebrate the 25th anniversary of our modern rail transit system (no, maybe they should do this).

[Hey yo, Militant, not bad for your first blog post in three months...that didn't hurt, did it? Now let's try this again sometime soon, okay?]
Commandeered by Militant Angeleno @ 11:54 PM

Yes. Metro should do this!