The Militant Takes On Long Beach's Beach Streets Uptown (a.k.a. Uptown Funk Gonna Give It To Ya) 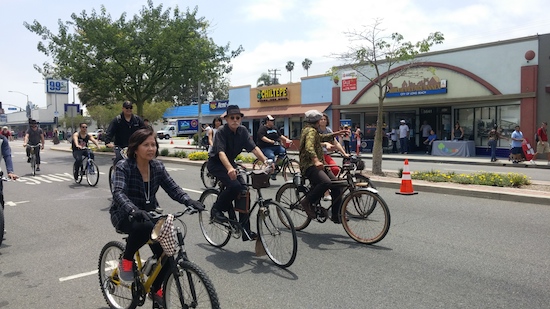 Just when you had your fill of CicLAvia last week, along comes another one! Well, kinda.

On Saturday, the City of Long Beach initiated its own ciclovia, or open streets, event, called Beach Streets (no, not Beat Street, but everybody say Ramoooon! (Ramoooon!)), which took place in Uptown Long Beach -- a route that involved a 3.3-mile stretch of Atlantic Avenue from Wardlow Road in the south to Harding Street in the north, at Houghton Park. Now, this technically wasn't the very first Beach Streets; as they did a small event in April using the already closed-off course of the Long Beach Grand Prix in Downtown Long Beach. But this was the first one that involved an open streets arrangement specifically for Beat, er, Beach Streets.

Now, the Militant is familiar with Long Beach; he even did a whole week of posts devoted to The International City in June 2011. But he had never been to this "Uptown" part of the LBC before. So this event was a treat and a half.

Being that The Militant lives somewhat north of Long Beach, he figured it would be an easy ride via the Red and Blue lines down there.

When The Militant arrived at 7th Street/Metro Center, a Metro staffer said that there were no Long Beach trains, and that we had to take the Expo Line to the 23rd Street/LATTC/Ortho Institute/Lorenzo/Kind Of Close to Adams Station, get off, and ride a shuttle bus to the Blue Line Vernon station.

Despite the event, like CicLAvia, being sponsored by Metro, the transit agency also picked this weekend to shut down part of the Metro Blue Line between the Vernon and Pico stations due to station maintenance at Washington, San Pedro and Grand.  Umm, did that make any sense at all?

The Militant had to endure the 15-minute "bus bridge" ride, which only took 15 minutes, in actual travel time, but add on another 20 minutes to get off the Blue Line, board the shuttle bus and wait for it to fill up before departing. Argh.

So, The Militant arrived at the Wardlow station a lot later than anticipated, Thank You Metro. Grrr.

After arriving there, he rode the .6-mile east on Wardlow to Beach Streets, which had a "temporary bike lane" set up for riders who came in from the Blue Line or from points east.

But here's where Beach Streets begins and The Militant's frustration ends.

Beach Streets was pretty much like a CicLAvia-lite. He estimated no more than 30,000 people. Which was fine; Long Beach is a smaller city, and even if Metro's stupid Blue Line closure this weekend ruined it for prospective visitors, this event was really for the people of Long Beach. Being that Los Angeles' CicLAvia consistently pulls in a huge crowd every time, there was really no pressure to pack Atlantic Avenue at all. And in the world of Southern California open streets events, there should really be no competition. So 30K smiling faces should be chalked up as a success.

The Militant also noticed that there were a greater percentage of children on the route, which is not just a good thing, but a great thing -- their generation will not know of Beach Streets as an anomaly or something novel, but their reality. And by the time these kids grow up to be the movers and shakers of Long Beach, you can bet that these things will be happening all the time. So kudos to the Beach Streets organization for getting all the kids out.

The event also had a more small-town feel; there were much more bands playing (including not one, but two New Orleans-style brass bands - in different places!), more booths or tables along the sidewalk or closed intersections to give the whole thing more of a rounded-out street festival feel. The City of Long Beach even dedicated an area for an Emergency Preparedness Fair, so this event had multiple functions for many people.

The Militant also noticed the slower pace of the ride. Having gone to all 13 CicLAvias to date, there's a certain speed and flow of the ride that's uniform (well, depending on how much people are on the road at one time). He was biking rather fast but felt like the a-hole from Los Angeles who was trying to speed and weave his way through.

In all, Long Beach did an excellent job with this Beach Streets Uptown thing. And part of it might have been attributed to the fact that a number of people who were out today had already experienced CicLAvia over the past nearly five years, so many people knew what to do and what to expect. The other part is that surely their organizers took copious notes during the past CicLAvias and replicated some of its best practices, such as the 9 a.m. to 4 p.m. event span, permeable intersections for automobiles and volunteer crossing guards.

The Militant was also impressed by the Bixby Knolls area. So many restaurants and eateries, and so little time, he really needed to come back to this area sometime.

Downside? There really was no downside. Maybe the closest thing was that there wasn't too much in the way of historical points of interest along the route. There was one of Long Beach's Giant Donut locations (Angel Food Donuts on Long Beach Blvd), and there was the Rancho Los Cerritos adobe, but both were a few blocks west of the route.

The Militant looks forward to more Beach Streets events (They are going to have more of these, right?), and will definitely be there!

Now, as you may or may not know, CicLAvia, Beach Streets and other open streets events originated from Bogota, Colombia's Ciclovia, which happens every week.

So what we're looking at is this: There are 88 incorporated cities in Los Angeles County (you might know how they got their names by now), and if at least a couple dozen of them organize maybe one to four (or more) open street events each year, and schedule them so they don't conflict...BOOM! We can have an open streets event every weekend year round!

Thanks for sharing such information and if you want a new antivirus, then you can visit McAfee activate

I have not said anything to express my gratitude for this post. This article was written by a brilliant individual who really impressed me. Thanks for sharing your knowledge with us. I'm sharing the content with you as well. Many people have found it helpful. For more detail read it mic not working in csgo.

Hello There. I discovered your blog using msn. That is a really well written article.
I will be sure to bookmark it and come back to learn extra of your helpful information. Thanks for the post.
I'll certainly comeback 토토

Hey! I'd like to start a blog so I can easily share my own experience and feelings online. Please let me know if you have any kind of ideas or tips for new aspiring blog owners.
경마
온라인경마

Woah! I'm really enjoying the template/theme of this website.
It's simple, yet effective. A lot of times it's difficult to get that "perfect balance" between usability and visual appearance. 카지노

I am sure this article has touched all the internet viewers, its really really nice post on building up new website. 토토

There are three types of irony 1 is verbal irony, 2 is situtional and 3 is dramatic irony
learn 5 most effect dramatic irony in assignment
reveal a character's feeling,add humor,create empathy,grab reader's attention and allow the unknown character

First of all, your blog is fun. I would love to see more articles like this. I will always check your blog next time, as you have great articles. If you would like to learn more about How to butterfly click faster, you can also visit the article I wrote about the topic. This post requires a lot of research and time for me. Please visit Butterfly clicking and let us know what you think.

This is also a very good post which I really enjoyed reading. It is not every day that I have the possibility to see something like this. 먹튀검증업체

I didn t know there was a place like this. I think it s good because there are many good comments. Let s get along well from now on. 메이저사이트

After reading your article I was amazed. I know that you explain it very well. And I hope that other readers will also experience how I feel 메이저검증업체

Some really nice and useful information on this site, besides I believe the style
and design has good features. 토토

It’s really a great and helpful piece of info. I’m glad that you shared this helpful info with us. Please keep us up to date like this. 안전사이트

Animeid has been termed as the best content service providers , as this service is one of the common and fundamental required service for almost all Romania tv shows. Get in touch with us for the best services.

clicksud is the ultimate entertainment platform for online series and online movies. Digital entertainment around the world is covered by and we are heading to one of the best online platforms in the world. understands the needs of the public and offers exactly what the visitors have, which makes them unique to us. I hope you will return to us so that we can continue like this.